Eric Adams in the Limelight 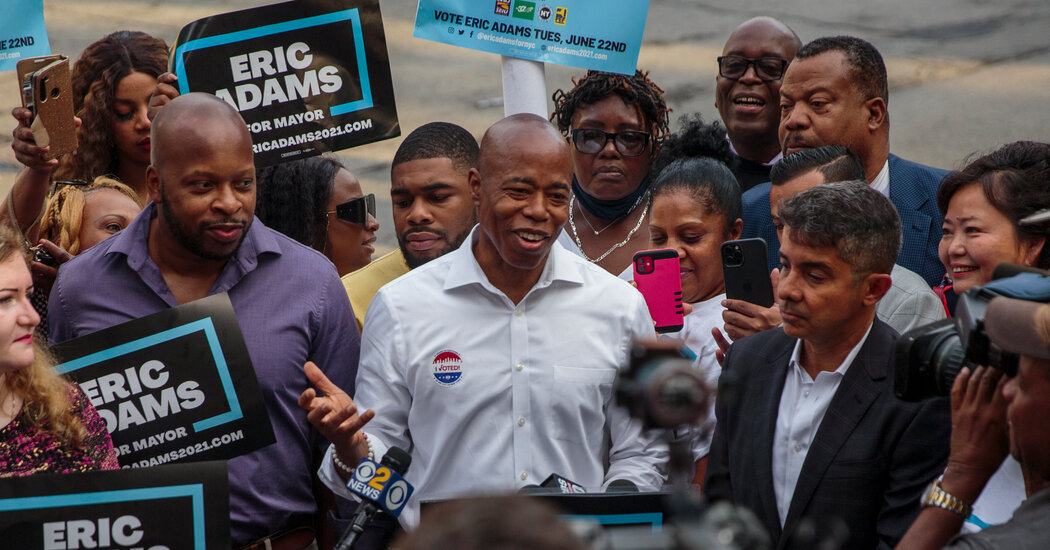 Weather: Scattered showers with peeks of sun, with afternoon storms that could turn severe and cause flooding. High in the mid-80s.

The final results of the primary election are expected to be certified in the coming days. But Eric Adams, the Brooklyn borough president, became the Democratic Party’s nominee for mayor last week when tabulations of ranked-choice votes showed he was in the lead, and his two top rivals conceded.

Now, given New York City’s overwhelmingly Democratic electorate, Mr. Adams is poised to become the next mayor. And with the campaign mostly over, he has stepped further into the limelight, describing in a series of interviews in recent days what his policy priorities are and how he intends to govern.

On Sunday morning, Mr. Adams appeared on two national talk shows and discussed several hot-button issues, including guns, legal protections for police officers, the economy and the pandemic. And he hammered home a message for Democrats around country: His victory amounted to a repudiation of the most left-leaning factions of the party.

In an interview on ABC’s “This Week,” Mr. Adams said that Democrats, reacting to the Trump administration, shifted their focus away from the “on-the-ground real issues that are facing everyday New Yorkers and Americans.”

“We can’t be so idealistic that we’re not realistic,” he said. “Cities are hurting all across America, and New York personifies that pain.”

On CNN’s “State of the Union,” Mr. Adams talked about focusing an anti-gun unit on gangs and working with the federal government to stem the flow of guns into New York. He said the city would talk to judges about how to keep people who are involved in gun violence behind bars.

He said national Democrats’ focus in recent years on curbing the prevalence of assault weapons, rather than handguns, was misplaced and “almost insulting.”

Mr. Adams said he did not think police officers should be allowed to be sued if they were doing the job as they were “trained to do.” And on the pandemic, he said he agreed with officials’ push in Los Angeles County to recommend people continue to wear masks indoors.

On “This Week,” Mr. Adams said he would cut bureaucracy that makes it hard to open new businesses. And he said he would improve public safety in subways and parks, criticizing the recent scenes in Washington Square Park in Greenwich Village.

“We must have parks, not like Washington Square, where people are injecting themselves with drugs while babies are trying to play,” he said.

The interviews showcased only a snapshot of Mr. Adams’s policies, many of which are still theoretical and would face political or logistical hurdles.

The head of the state’s largest transit union said he is looking to back someone else against Gov. Andrew M. Cuomo in the 2022 governor’s race. [N.Y. Post]

Firefighters battling a blaze on the second story of a Bronx home found a 71-year-old man who had been fatally stabbed in the neck, police said. [Daily News]

A spike in demand for new bicycles and bike repairs during the pandemic is still causing a crunch at bike shops. [amNY]

And finally: A Shakespeare comedy set in Harlem

At the first rehearsal for “Merry Wives,” the playwright Jocelyn Bioh told a story. In the first months of her undergraduate acting program, she said, a professor had scrutinized her look, listened to her accent and decided that Shakespeare was not for her. “I was told that none of my Blackness, none of my Africanness, none of my New Yorkness was allowed to be a part of Shakespeare in any way,” said Bioh, a child of Ghanaian immigrants.

But for this summer’s Shakespeare in the Park, which began performances last week, Bioh (“School Girls,” “Nollywood Dreams”) and the director Saheem Ali have rolled out a new adaptation of “The Merry Wives of Windsor” that repopulates Shakespeare’s folk comedy with the African immigrants who call Harlem home. “To be able to put all of myself into something that I was told none of myself could be in feels pretty incredible,” she said, tearing up on the 105-person video call.

A knockabout comedy, this “Merry Wives” is also something more. Like the hit version of “Much Ado About Nothing” that the Delacorte presented in 2019, it features an all-Black cast. But this time the cast represents immigrant communities not often seen onstage. Bioh and Ali hope that it will serve as a model of what theater might become. “We want it to be antiracist,” Ali said. “We want it to have opportunities for people of color that didn’t exist before.”

Besides, who better to usher in hot vax summer than its thirsty hero, Falstaff?

It’s Monday — get the show on the road.

After a quick visit to the Guggenheim, my friend John, who was visiting from out of town, and I had just enough time to get a cab to his Midtown hotel so that he could grab his luggage and catch a shuttle to Kennedy Airport.

It was a beautiful spring Saturday. The streets were bustling, and the cabs racing down Fifth Avenue past the museum were all occupied. One finally stopped for us, but as I reached for the door handle, a man and woman who were together reached for it too.

I hated to be rude, but I nearly shoved John into the cab.

When we got to the hotel, we dashed through the lobby and pressed the elevator button. One arrived, and we stepped in along with some other people. When the doors closed, we found ourselves face to face with the couple we had taken the cab from.

“I thought you had to catch a plane,” the woman said.

New York Today is published weekdays around 6 a.m. Sign up here to get it by email. You can also find it at nytoday.co