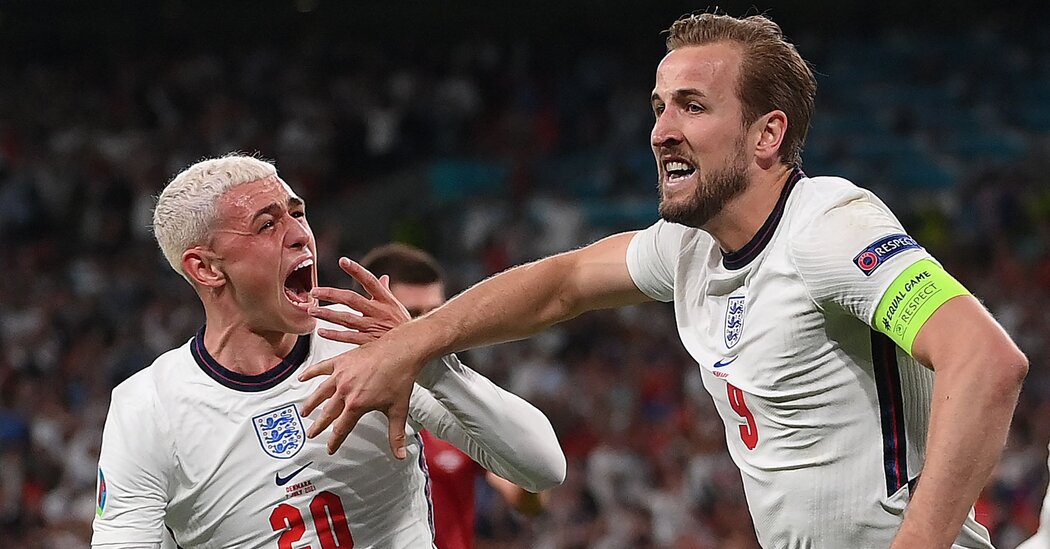 LONDON — Even victory, even vindication is not free from suffering. For more than half a century, England has known nothing but pain, disappointment and regret. It might have imagined that breaking that brutal, biennial cycle of dashed hopes and bittersweet dreams once and for all would feel light, and joyous, and pure. It was not.

England’s fans had been gathering on Wembley Way — the pedestrian street that runs from the Wembley Park tube station at one end to the stadium, its curving, glinting arch slicing through the sky, at the other — since the early afternoon, drinking and singing and waiting, impatiently, for the moment they have been willing into existence for a lifetime to arrive.

They came bearing flags, crosses of St. George decked out with the names of their club teams and their hometowns, and they came wearing their years of hurt on their backs. Quite how many vintage jerseys have been speckled through the crowd at Wembley, these past three weeks, has been striking.

There are plenty, of course, clad in the most recent, bright white and skintight version, and many more wearing recent iterations: the blue away jersey of the last couple of years, the red number that Gareth Southgate’s team wore in Russia, three years ago. But there have been older ones, too: most frequently a relatively obscure sky blue edition from the early 1990s, and an effort from soccer’s “gray period,” later that decade, when received wisdom had it that the key thing about a jersey was that it should look good with jeans.

Strictly speaking, both conjure unhappy memories: the semifinal elimination by West Germany at the 1990 World Cup and the semifinal elimination by a united Germany six years later in the European Championship. Both came through the exquisite torture of penalty shootouts. Both are etched onto the national consciousness. Both have come to symbolize the unique cocktail of cruel hope and cherished disappointment that comes, inexorably, with being an England fan.

Those shirts are worn, though, because they indicate legitimate membership of a club. They serve as proof of credentials, a sort of polyester-blend certificate of authenticity: a visual shorthand that you were there, at least in spirit, for Turin in 1990 and Wembley, the old Wembley, six years later, that you are no ingénue, that you know what it is to suffer.

Even as the country has slowly allowed itself to be swept away — a cliff giving itself to the sea — over the last three weeks, as the prospect of only the second major final in its never-knowingly-undersold history has reared up ever higher in the popular imagination, some of that spirit, knowing and self-aware and vaguely ironic, has remained.

It was needed, perhaps more than ever, on the evening that everything changed. England’s progress to this point had been uncharacteristically serene. It had rumbled through its group, rarely exiting second gear. It dispatched Germany with cool efficiency. It swept past Ukraine. Denmark, in the Euro semifinal Wednesday, would be different. This would be uncut agony. In the end, England would make it to a final, to uncharted territory, but it would do it in a manner so familiar it was almost comforting.

All of that energy that had crackled for hours along Wembley Way would, at first, be converted into noise, booming and echoing around the stadium in the fading sunlight, roaring England on. Within half an hour, though, as Mikkel Damsgaard’s free kick eluded Jordan Pickford’s grasp and gave the Danes the lead, it would change shape once more, into an anxiety so thick it was almost tangible.

An own goal, from the Denmark captain Simon Kjaer — under pressure from Raheem Sterling — drew England level, but it made no difference. The Danes, their legs creaking and their lungs heaving, held firm. No team has had a more draining tournament than Denmark; that it was here still, after all it has endured, deserved a more rousing finale than this. It had no intention of going quietly; only in England, to England, were the Danes the supporting act, rather than the central plot.

With every block, every attack repelled, every opportunity lost, England’s memories stirred; they could feel fresh scars starting to form. Kasper Schmeichel, the Danish goalkeeper, seemed to have decided to mount a one-man campaign to break English hearts. The clock ticked inexorably on, beyond 90 minutes, into extra time. Of course it went to extra time. England always goes to extra time.

This time, though, would be different. Denmark’s fatigue was so deep, so oppressive, and England’s resources so rich that those penalties, the ones that haunt English dreams, were not so close as they might have appeared. The dam had to break at some point: as Sterling darted past Joakim Maehle, an outstretched leg apparently clipping a heel, a penalty was awarded.

Even then, though, it could not be straightforward. Whole universes burst into life and collapsed into themselves in the time it took the video referee to approve the decision. Harry Kane stepped up, struck the ball low, but Schmeichel saved it, once again, a final flashback of how things used to be, of what has gone before.

And then — after all that, after the last 90 minutes and the last three weeks and Croatia and Iceland and Costa Rica and Bloemfontein and the Wally with the Brolly and Baden-Baden and on, back into the mists of time, beyond Southgate and Chris Waddle and the Hand of God and all the rest of the pain and the regret of half a century — the moment came.

It did so almost in slow motion, as though it was there to be savored, to make up for all that had gone before. The ball rolled to Kane. Schmeichel was still scrambling to his feet. The goal, and the country, waited. And then everything cycled forward, in the time it took to blink, and Kane was sliding on his knees and his teammates were enveloping him and Wembley was melting above him and around him.

The years of hurt are not over. England has won nothing yet. Italy, certainly, will be by some distance the finest, strongest team it has faced in either of the two tournaments for which Southgate has been in charge.

But England is back in a major final. Whatever this edition of the jersey means, for generations to come, it will be something different. It might be a new form of agony. It might be something else, something that does not have to be threaded with irony. Either way, the cycle of the same old suffering is at an end. That, perhaps, is where the lightness may come.