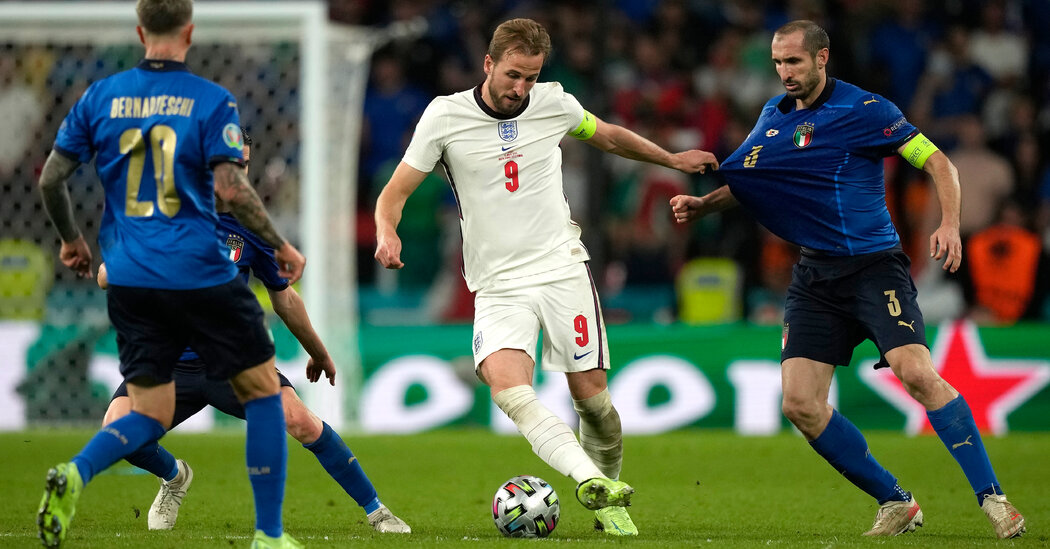 Tweet! Tweeeeeet! That’s it for the first extra period.

We’re halfway to a shootout, which would be only the second in the history of the Euros. The first, in 1976, gave birth to the Panenka.

Almost through the first extra period, Italy almost steals it: Emerson whips in a ball from the edge of the area and Bernardeschi — sailing through the air right in front of Pickford — somehow doesn’t collide with it.

What a relief for England there. You could watch that four times and still not understand how … something didn’t go right/wrong (depending on your view) there.

Nasty foul by Emerson on Henderson there, setting a pick for Bernardeschi.

On the sideline, Locatelli slips on, replacing Verratti.

Another change from Italy: Torino’s Andrea Belotti comes on for Insigne up front. Fresh legs to run at a weary England back line.

Kuipers blows his whistle and shoulders drop across the field. We’re headed to extra time, just like the two semifinals.

From Rory at Wembley:

Quite how England lost control of a game it had in its palms is not easily parsed. For an hour, maybe a little more, Gareth Southgate would have had cause to be quietly — he knows no other way — satisfied. Italy had the ball, but England not just the lead, but some measure of control, too.

That it ebbed away might be tactical: Roberto Mancini’s throwing on Domenico Berardi for the ineffectual Ciro Immobile. It might be physical: England had burned out a little in the first 20 minutes or so, and was now paying the price for its fire and fury.

But more than anything, it was emotional: England dropped just a little too far, and Italy had a little too much space to play in; a couple of glimmers of goal were enough to revive hope in Mancini’s team. Leonardo Bonucci’s equalizer was the reward; for a few minutes, until the injury to Federico Chiesa drew the sting from the game, it seemed to have the bit between its teeth.

England, from here, will dread penalties more than Italy. But England has the deeper resources in reserve to avoid them. The question may be when Southgate chooses to use them.