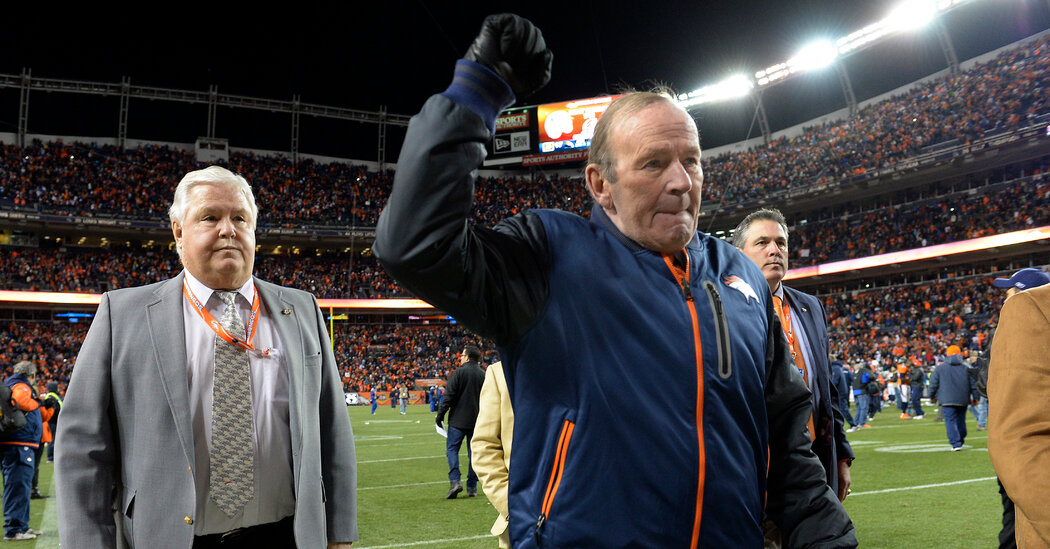 The feud over the ownership of the Denver Broncos moved a step closer to resolution — and a potential sale of the club — Monday when a judge in Arapahoe County, Colo., dismissed a lawsuit that contested the will of the former owner Pat Bowlen, who died in 2019.

The suit had been filed by two of Bowlen’s adult daughters and was at the center of a fight over control of the team between his seven children and team executives. The tug of war dates back to 2014 when Bowlen, who had Alzheimer’s disease, surrendered control of the team to a trust and laid out the terms of succession: Three trust administrators, led by the Bronco’s chief executive, Joe Ellis, would pick the team’s next principal owner from among Bowlen’s heirs or sell the team.

At least two of Bowlen’s children expressed interest in running the club. Beth Bowlen Wallace, the second oldest of Bowlen’s children from his first marriage, worked at the team for several years until her position was eliminated in 2015. Bowlen Wallace, 50, told The New York Times in 2018 that she believed she was qualified and ready to take control.

The trust, though, suggested that it supported Brittany Bowlen, 31, one of the five children from Pat Bowlen’s second marriage who is now an executive with the team.

Ellis has said that if all seven of the Bowlen children do not back any chosen successor, the trustees would look to sell the team.

In 2018, Bowlen’s two children from his first marriage, Bowlen Wallace and Amie Bowlen Klemmer, sued the administrators of the Patrick D. Bowlen Trust, claiming that their father was suffering the effects of Alzheimer’s disease when he set up the trust, and that the trustees unduly influenced him.

On Monday, the judge overseeing the case, John E. Scipione, dismissed the case and said that the trust agreement reflected Bowlen’s “intent and will,” and that Ellis and the other trustees had “full and complete authority to administer” the trust.

Neither side in the dispute is allowed to discuss the case, and it was not immediately clear if they reached a settlement, which may have included an agreement between the heirs and the trust to sell the team rather than choose a controlling owner from among the siblings.

The children have appeared together, including in 2019, when Pat Bowlen was inducted into the Pro Football Hall of Fame. But they are not united around any one of them becoming controlling owner despite the dismissal of the lawsuit, raising the odds that the team will ultimately be sold, according to a person with knowledge of the family’s dynamics who was not authorized to speak on their behalf.

When asked whether the team may be put up for sale, the Broncos provided a statement from Ellis.

“Regarding the future of the Denver Broncos’ organization, our No. 1 priority remains a timely, responsible and orderly determination of Broncos ownership,” the statement said. “There are no changes with the operation of the team, which is completely focused on a successful 2021 season.”

If the trustees elect to sell the team, the Broncos could fetch a record price that surpasses the $2.2 billion paid for the Carolina Panthers in 2018. According to Forbes, the Broncos are worth $3.2 billion, the 11th most valuable N.F.L. franchise.

Under Bowlen’s stewardship from 1984 to 2014, the Broncos became one of the league’s premier franchises, notching 19 seasons with a record above .500, 12 division titles and seven Super Bowl appearances. But since winning the Super Bowl in the 2015 season, the team has had just one winning campaign.

In January, John Elway, who as quarterback helped the Broncos win their first two Super Bowls, stepped down as general manager after a decade on the job.

N.F.L. teams change hands infrequently and the league is by far the most prosperous in the country, so interest in the Broncos would likely be strong. In May, the league signed new broadcast contracts worth more than $100 billion, ensuring the profitability of all teams for another decade.