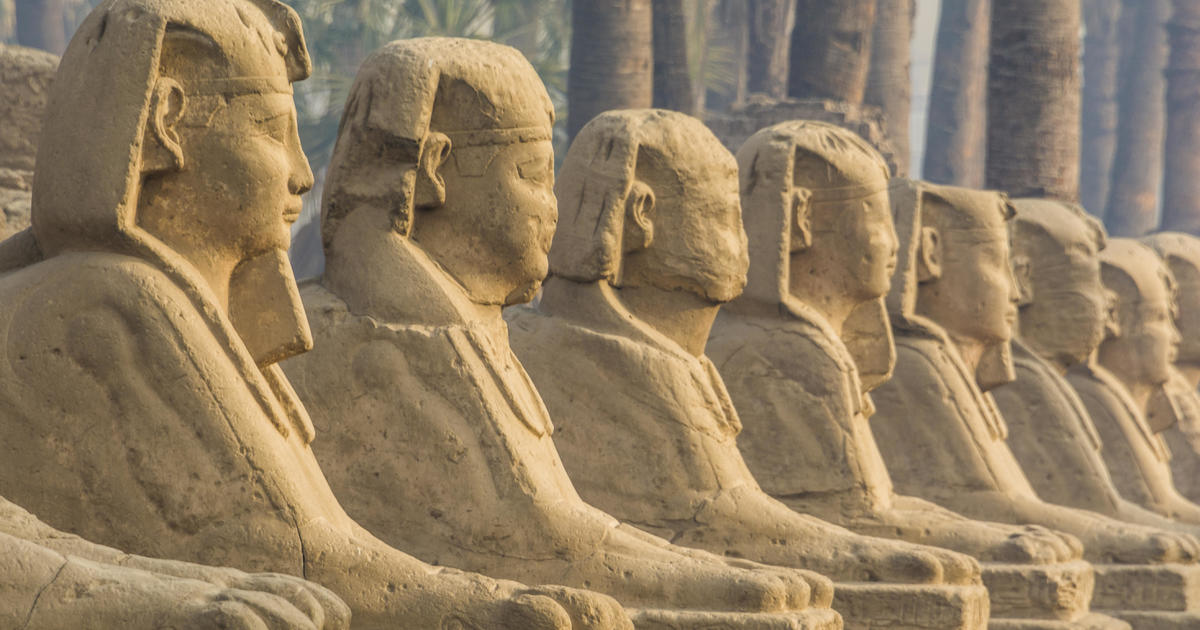 Cairo — As Americans looked forward to the time-honored tradition of the Thanksgiving Day Parade, almost 6,000 miles away, Egypt was hoping to revive a tradition of its own, which likely hasn’t been seen in a couple thousand years. The Egyptian Ministry of Tourism and Antiquities was to hold a grand ceremony on Thursday evening to mark the reopening of the ancient Avenue of Sphinxes in the city of Luxor.

The sacred road, once named “The Path of God,” connects the Temples of Karnak in the north with Luxor in the south. Paved in sandstone blocks, the 1.7-mile-long road is lined on both sides with more than 1,050 statues of sphinxes and rams. They’ve spent centuries buried under the desert sands, but slowly, over many years, Egypt’s renowned archaeologists are bringing them back into the light of day.

So far 309 statues have been excavated in good condition, but that number may increase as excavation work continues, Dr. Mustafa Al-Saghir, director general of the Karnak monuments, told CBS News.

Like much from the ancient world, the Avenue of Sphinxes hasn’t given up all its secrets.

It isn’t certain who started building the road. Some scientists have suggested that it could date back all the way to Queen Hatshepsut, about 3,500 years ago, but Dr. Al-Saghir says researchers haven’t found “any archaeological evidence on the road to back this theory.”

Others believe it was built under King Amenhotep III, a couple hundred years later, but Dr. Al-Saghir says the artifacts on the road relating to that pharaoh were moved there later. He believes it may have been Egypt’s most famous ancient ruler, who sat on the throne about 3,000 years ago, who started the Avenue of Sphinxes.

“The oldest monument we discovered of the road goes back to King Tutankhamun, who made the first 300 meters from the 10th pylon of the Karnak Temple to the gate of the Mut Temple,” he told CBS News.

Whoever kicked the project off, there’s broad agreement that most of the road, a span roughly 2,400 yards long, was built during the reign of King Nectanebo I, founder of the 30th and last native dynasty in Egypt, about 2,400 years ago.

Every year, ancient Egyptians would hold a festival called “Opet” in the second month of the Nile flooding season to celebrate the fertility of the gods and the pharaoh. Priests would carry three divine boats on their shoulders, transporting statues of the Theban Triad — the deities of Amun-Re, his consort Mut and their son Khonsu — from Karnak to Luxor.

The trip was made by foot along the Avenue of Sphinxes, or sometimes by boat along the Nile River.

The festival lasted from days to weeks depending on the ruler at the time, and then the statues were carried back to Karnak.

Over time the road was abandoned and buried under the sand. But in 1949, the first eight sphinx statues were discovered in front of the Luxor Temple by Egyptian archaeologist Dr. Zakaria Ghoneim.

The excavations have continued for years, on and off, as archaeologists uncover and map the ancient road. They’ve had to demolish some buildings, including mosques, a church and many homes, that sprung up along the route over the ensuing millennia.

The Ministry of Tourism and Antiquities was lauded for the spectacle it put on last April, when royal mummies were paraded down a thoroughfare to a new museum home, and the government is hoping to produce a ceremony on the same scale Thursday to promote the city of Luxor as one of the largest open museums in the world.

The event will try to recreate the spirit of the ancient Opet festival, and will include music, dancing and light shows.