Edwin Jackson Is Still on the Move 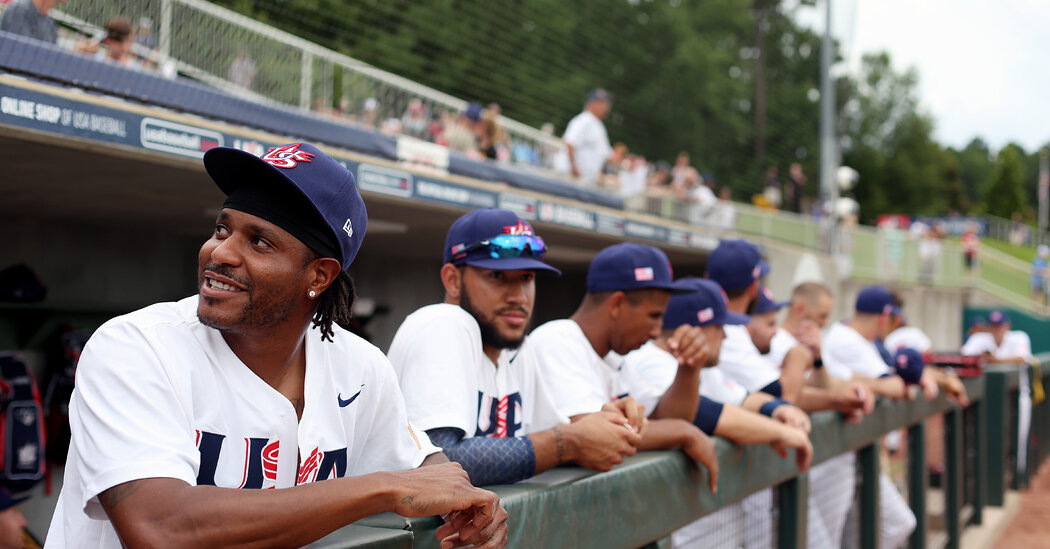 Edwin Jackson was still in diapers the first time he moved.

He was born in Neu-Ulm, Germany, where his father was stationed in the U.S. Army. But duties change, and by the time Jackson turned 1, his family had moved to Fort Polk, La. At 6, the family moved back to Germany for another two years.

“I explained to them this is my job,” said Edwin Jackson Sr., who served in the Army for 22 years. “It requires me to pack up and leave abruptly. So they was kind of prepared and expected that.”

Those expectations primed the younger Jackson for a nomadic existence in Major League Baseball. The latest stop for the well-traveled 37-year-old? Trying to win a gold medal at the Tokyo Olympics as a member of the U.S. team’s bullpen.

Jackson fondly remembers his early experiences overseas: There was German ice cream that didn’t quite taste the way it does in the States and field trips to castles. His 90-minute commute to school in Hesse from his family’s duplex-style military housing gave him plenty of time to do his homework.

“It was kind of dope,” he said of his childhood. But staying in one place was never in the cards. The family’s next stop was Columbus, Ga., where Jackson Sr. ran the mess hall at Fort Benning before retiring as a sergeant first class. Columbus, a consolidated city-county alongside the Chattahoochee River, offered a rare glimpse of stability, as the younger Jackson remained there through high school.

After a star turn at Shaw High School, Jackson was selected by the Los Angeles Dodgers with a sixth-round pick in the 2001 Major League Baseball draft. His own tour of service was beginning.

When people meet Jackson, they frequently have the same question:

Can you name all of the teams you played for in order?

“I can, but it won’t be quick,” Jackson, the 17-year M.L.B. veteran who played for a record 14 clubs, warned before listing nearly half of the league’s teams. “L.A., Detroit — I mean Tampa Bay!”

The pitcher swiftly recovered, delivering a perfect finish: “Tampa Bay to Detroit. Detroit to Arizona. Arizona to the White Sox. White Sox to St. Louis. St. Louis to D.C. D.C. to Chicago. Chicago to the Braves. The Braves to the Marlins. The Marlins to San Diego. San Diego to Baltimore, I believe. Baltimore back to the Nationals. The Nationals to Oakland. Oakland to Toronto. Toronto to Detroit.”

No one in M.L.B.’s extensive history books can top that list of organizations. Jackson is his sport’s ultimate wanderer, a legacy he insists was “predestined” by his upbringing.

Dusty Baker, who managed Jackson with the Nationals in 2017 and served in the Marine Corp Reserve, thinks Jackson’s childhood served him well.

Jackson’s big league voyage began with the Dodgers on Sept. 9, 2003 — his 20th birthday. A converted outfielder who was Baseball America’s No. 4 prospect at the time, he outdueled the future Hall of Famer Randy Johnson in his debut.

“That kind of catapulted him in a way that probably was unfair because he wasn’t ready for all that,” said Angels Manager Joe Maddon, who coached Jackson with the Rays and the Cubs.

Despite Jackson’s hurried progression, Maddon thought he had “the next Bob Gibson” on his hands when the right-hander was dealt to Tampa Bay in 2006. Jackson would go on to make an All-Star team with Detroit in 2009, throw a 149-pitch no-hitter with Arizona in 2010 and win a World Series title with St. Louis in 2011. Regardless, he never quite met the lofty expectations that followed him to the majors.

A career record of 107-133 and a 4.78 E.R.A. led to six trades and several releases as clubs “became frustrated that they could not extrapolate the talent,” that Maddon said “everybody recognized.”

“This guy still has a golden arm,” Baker added. “I just can’t figure out why he’s been on so many teams. He never caused any problems, nothing. Some guys are just journeymen kind of guys.”

Raised in a laid-back household despite his father’s military work, Jackson learned to go with the flow. He considered each new destination an opportunity to leave a positive imprint and appreciated the diversity that came with every new clubhouse and community.

“Those who can adjust can continue to evolve in life,” Jackson said. He added that those who can’t are going “to get stuck in quicksand.”

Jackson wasn’t sure whether he would accept the U.S. team’s invitation to play in these Olympics, but his wife, Erika, set him straight.

A free agent, Jackson last pitched in the majors in 2019. He had been throwing bullpens and staying in shape, hitting mid-90s on the gun. But after he received and rejected just one “super, super lowball” spring training invitation this year, he wasn’t sure about displacing himself again.

“Are you crazy? This is an opportunity of a lifetime,” his wife, an Air Force veteran who had also grown up in the military, told him. “This isn’t M.L.B. This is the Olympics!

Those words pushed Jackson to accept the offer, and he ended up describing the qualifying games as “some of the most fun I’ve had in baseball in a long time.”

But the trek to Tokyo has the potential for more than fun. It is also an opportunity for representation.

Jackson is foreign-born, comes from a multigenerational military family and is a Black ballplayer at a time when that demographic is in decline. The ability to make an impact at the Olympics is not lost on Jackson, the secretary of the Players Alliance or his family — especially after years when sports and the armed forces have been pitted against each other on racial and social justice issues.

“Not only do I want to represent the country, I want to represent my fellow African Americans that play this game of baseball,” said Jackson, who grew up watching Braves stars like Andruw Jones, Fred McGriff, David Justice, Otis Nixon and Brian Jordan. “I want to be able to go influence a young African American player that’s never played baseball before. They look at me and be like, ‘Damn, maybe I could be like him.’”

That Jackson is playing for the U.S. team means a great deal to his father.

“For me as a parent that served my country, I think it coincides with him going there,” Jackson Sr. said. “He’s serving his country as well.”

Jackson said winning gold in Tokyo would be “the crème de la crème,” or “the best ending to a story ever,” but he hasn’t given up on a potential return to the majors.

Any chance he gets with a big league team would have to be good for him and his family. Jackson and his wife have passed their peripatetic lifestyles on to their own children — Exavier, 9; Elan, 7; and Elijah, 3 — allowing them to see cities across the country while developing the same social skills that the parents did as youngsters.

“They were some troopers,” Jackson said, recalling how coming home to his children helped him shake off his worst days on the mound, particularly his first two years with the Cubs, when he lost 33 games. So with the pandemic continuing and so many moves already under their belts, Jackson won’t jump at any offer.

Of course, a team would have to be interested. But players who have recently seen Jackson throw claim he still has major league stuff.

“He looks electric,” said Todd Frazier, another of the U.S. team’s recognizable veterans.

Mike Scioscia, manager for the U.S. team, added: “Don’t worry about what his age says. His body’s like a 26-year-old.”

Others are amazed that Jackson is still pitching at a high level after all the bouncing around he has done.

“It tells me he don’t give up,” said Octavio Dotel, who played for 13 teams from 1999 to 2013 and was Jackson’s predecessor as the most-traveled major leaguer. “He’s still fighting.”

Some, like Maddon, attribute Jackson’s staying power to his “adaptability” and “affable” personality. “People still want to be around him in this game,” the manager said. “He never burned a bridge to the point that he’s not considered.”

Others point to his determination.

Jackson’s time with the U.S. team will begin in earnest with a game on Friday against Israel, which gives him the chance to show what he has left. But he knows better than to make plans. If teams come calling, great. If not, he can find fulfillment in the fact that the final stop of his itinerant career allowed him to play for a country that he has traveled so well.

“I’m walking right now on a trail, and eventually I’m going to get to a split,” Jackson says. “Whichever split it may be, I’m going to take it without losing a step or a stride.

“I’m going to be smiling either way.”