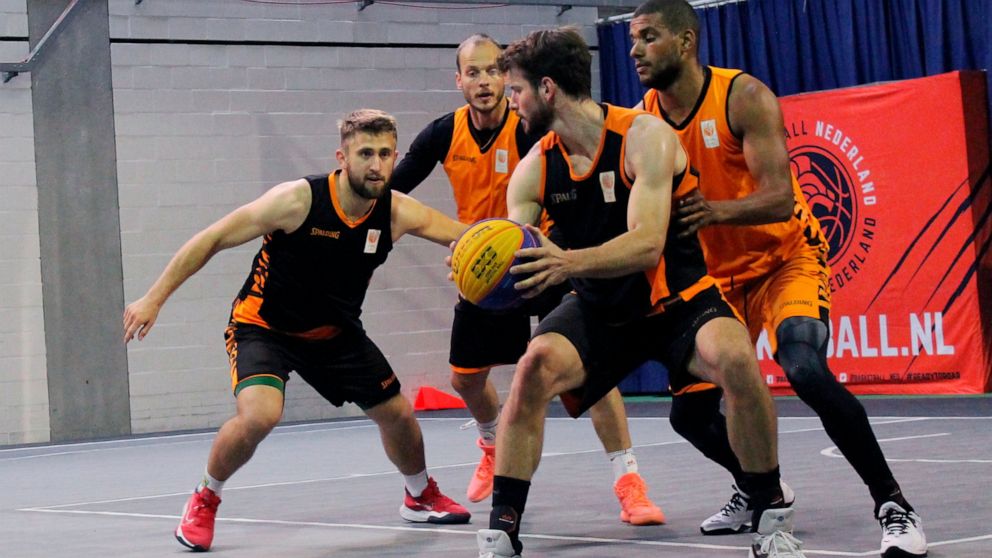 AMSTERDAM — Dimeo van der Horst’s time was running out with the Dutch national basketball team, so he gave 3-on-3 a shot.

The Netherlands 3×3 men’s team is headed to the Tokyo Olympics after knocking off the United States and France to qualify — unlikely propositions in 5-on-5 — with Van der Horst sinking a long-range effort to clinch victory over the French.

The fast-paced, half-court 3×3 is an Olympic sport for the first time and presents traditionally overlooked hoops countries — Japan, Poland and the Netherlands among them — with opportunities for medals.

“For me, it’s one of the most beautiful things you can do as an athlete,” the 30-year-old Van der Horst said. “But also for the country — to show that we’re here, we can play basketball.”

FIBA has grown the sport for more than a decade, getting it into the 2010 Youth Olympics and holding its first world championship two years later. Now, it’s an Olympic sport.

Many of the players also compete in FIBA’s professional circuit. Tournaments are held in historic European squares, near beaches, even in shopping malls as a DJ cranks music throughout the games.

Countries with less-established and less-lucrative 5-on-5 leagues tend to gravitate toward it.

“It’s a great chance for the smaller basketball countries to show themselves,” said Jesper Jobse, one of the Netherlands’ first official 3×3 players who now advises the national team, manages a pro squad, and runs a 3×3 foundation.

The Netherlands had never qualified for the Olympics in basketball before. The sport ranks way behind soccer, cycling and volleyball in the Netherlands.

The Netherlands finished near the bottom of the 2014 world championships — now called the World Cup. But the Dutch federation hired a coach, budgeted for 3×3 and reached the World Cup final twice with a team captained by Jobse.

At a recent practice session in an Amsterdam indoor tennis facility converted to a basketball court, players were reminded constantly to defend against the 2-point shot — in 5-on-5, that would be a 3-pointer. The scoring is ones and twos — like in playground 3-on-3.

Because of the immense value of the 2-pointer, defenders usually don’t leave their opponent to help a teammate during drives to the basket — that could leave someone open at the 2-point line.

“We have a rule,” Netherlands coach Brian Benjamin said, “you can never be too tired to take the 2-point shot away. For guys to get that, it takes sometimes nine months to a year for them to understand that you can never give up — you can never die on a play.”

The 12-second shot clock spurs the frenetic pace. Games are only 10 minutes long or first to 21. Coaches are not allowed on the floor — players make decisions like when to substitute. Teams consist of four players.

Versatility is vital. The Dutch players who competed in the qualifying tournament — Van der Horst, Arvin Slagter, Jessey Voorn and Julian Jaring — are all under 6-foot-6.

The 6-foot-5 Van der Horst was a point guard in the Dutch Basketball League, where Slagter was the MVP in 2014, before 3×3.

“I went from outside and passing the ball to the big guys to setting screens and receiving the ball,” Van der Horst said. “In 3-on-3, the most important (aspect) is that you can do multiple things.”

Van der Horst, Slagter and Voorn were selected along with Canadian-born Ross Bekkering to compete in Tokyo.

Serbia is the favorite on the men’s side, and China is the women’s defending world champion but the United States is sending a women’s team boasting four WNBA players, including Kelsey Plum.

Serbia’s top weapon is Dusan Bulut, who has led the world player points rankings for years.

Bulut has been at the center of FIBA’s battle to grow 3×3 in the United States, where rapper Ice Cube has his Big3 league. He was set to play in the Big3 in 2019 but withdrew, saying FIBA had threatened his Olympic eligibility. The 35-year-old Bulut appears headed to the Big3 after the Olympics — he was selected third in the league’s draft in June.

FIBA, which emphasizes the “x” for branding, has teamed up with the Kevin Garnett-owned Hoop it Up in the United States.

“We expect these opportunities to rise significantly as the sports industry leaders watch a spectacular 3×3 event in Tokyo and some of our best athletes become national and international stars after winning Olympic medals,” Zagklis said.

First up for the Netherlands on July 24? Serbia.

“They are the team to beat,” Van der Horst said, “but we’re working hard so we might change that.”