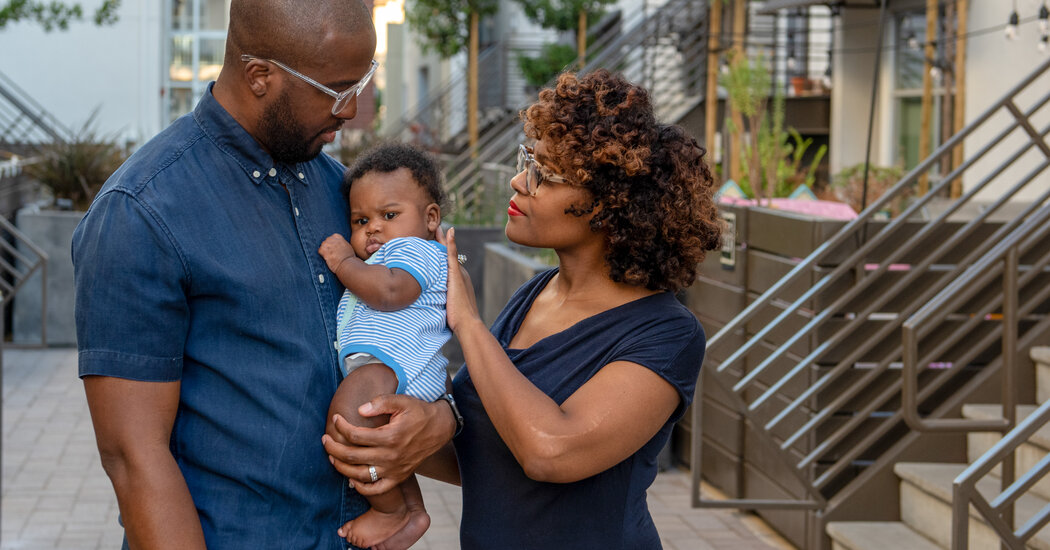 When Camille A. Thomas began feeling labor pains, her first call was not to her doctor. It was to her doula.

Having a doula was important to her. As a Black woman, she knew her pregnancy was more likely to end with her baby being born too soon or too small, and that Black women in the United States are far more likely than white women to die during labor or after birth.

“I wanted to make sure that I had an advocate and a voice if I wasn’t able to speak for myself,” said Thomas, who lives in San Jose and owns a coaching and consulting firm.

Yet when she was finally ready to give birth in April of last year, her doula was not permitted to join her and her spouse at El Camino Hospital in Los Gatos.

The care she planned to have during the birthing process was another casualty of Covid-19. Under policies put in place last year to stop the spread of the coronavirus, major hospital systems across California — including Kaiser, Sutter, John Muir, El Camino and the University of California, San Francisco — had been permitting just one guest, with few exceptions, in the delivery room.

Now, after Gov. Gavin Newsom has reopened the state and eased restrictions, policies within the health care system are still being carefully regulated.

In March, the California Department of Public Health — the agency that issues recommendations for hospitals — published updated guidelines for several groups, including labor and delivery patients. A recent statement recommends that “up to two visitors or support persons” be allowed in, noting that they need not be from the same household, “provided physical distancing can be accomplished.” The statement also recommends that a doula, if desired, be allowed in addition to these visitors. Hospitals throughout the state have updated their visitor policies to align with this recommendation.

Davon Crawford, the doula who worked with Thomas, said the earlier restrictions hindered the services she could provide. “I was forced to change my scope of practice and had no choice but to support my clients virtually,” she wrote in an email.

Before the pandemic, Crawford averaged four clients per month. The pandemic and its related restrictions reduced that number to four “for the entire year,’’ she wrote, adding that she is hoping the relaxed guidelines will allow her practice to rebound.

Covid-19’s disproportionate impact on minority communities in the U.S. has been well documented. Although research still needs to be done on the impact of the pandemic on maternal health inequities, it’s likely that these inequities have worsened over the last year, according to Ana Langer, a maternal health expert with the Harvard School of Public Health.

Since the beginning of the pandemic, advocacy groups have fought for the continued inclusion of doulas in the birth process because research shows their presence can reduce many of the negative impacts for women of color.

A 2018 report for the National Partnership for Women & Families found that Black women in the United States are three to four times more likely to die from pregnancy or childbirth than are white women. Even higher education and income levels do not render them any less likely to suffer bad outcomes, the research found.

Doulas are labor and delivery partners who spend time getting to know their clients’ specific needs and helping them construct their birth plans. They are not medical providers, but most practicing doulas undergo training and certification in prenatal, birth and postpartum care. In several studies, doula care has been shown to improve outcomes for women who are more likely to experience preterm birth, low birth weight and birth complications, and to decrease use of epidurals.

As the most frequent users of doulas, Black women had likely been most affected by the visitor restrictions.

“Doulas are a really important resource for the people who need it the most,” said Anu Manchikanti Gómez, an associate professor at the U.C. Berkeley School of Social Welfare.

Just before the pandemic struck, California state legislators had been moving to address maternal health disparities by strengthening doula care. A bill in the State Assembly introduced in February 2020 would have established a state-financed doula-care pilot program for low-income women in 14 counties, including those with the highest levels of birth disparities.

The bill died in committee.

The National Health Law Program, an organization working to defend the rights of low-income people to equitable health care, said in a statement that the bill “collapsed as legislative energy was poured into responding to the Covid-19 pandemic.”

When Thomas settled into her delivery room last year, she and her spouse, Reuben Thompson-Amarteifio, FaceTimed their doula so she could participate.

But Crawford couldn’t see her client’s face. Thomas lay covered in her hospital bed, positioned on her side, facing away from the camera and wearing a blue mask. Thomas told Crawford about the pressure she was feeling.

“Breathe,” Crawford encouraged her in a soothing voice. “Keep doing what you’re doing because that is the recipe for birthing your baby the way you want to.”

They ended the call, and an exhausted Thomas drifted off to sleep, still laboring. When she woke up, everything was moving so quickly that her husband didn’t get the chance to FaceTime Crawford again. After just three pushes, their baby arrived.

A few minutes later their baby boy, whom they named Cameron, was placed on his mother’s chest. The elated couple began making calls to share their news. One of the first calls was to their doula.

Sarah Hoenicke Flores writes for the Investigative Reporting Program at the University of California, Berkeley, Graduate School of Journalism.

Here’s what else to know today

The massive Dixie Fire, currently California’s largest blaze, has destroyed dozens of homes and threatened more in remote communities that are hard for firefighters to reach, The Associated Press reports. Gov. Gavin Newsom declared an emergency in four northern counties because of wildfires.

A blast of hot air is forecast to raise temperatures across much of the continental United States in the coming week, adding another stretch of sweltering days to what has already been a punishing summer for many.

A photographer for The Los Angeles Times took photos, using a drone, of the stark reality of the drought affecting California. The photos include locations such as Lake Oroville, Folsom Lake, Trinity Lake and Lake Shasta.

Americans have been hearing for months about the frightening rise of the Delta variant. But the virus is not the root cause of surging infection rates in parts of the country. Vaccine refusal and hesitancy are to blame.

Millions of parents, mostly mothers, have stopped working for pay because of the pandemic child care crisis. Many others have had to work fewer hours or decide not to take a promotion. The disruption could have long-term career costs.

Albert Dytch, a 71-year-old man with muscular dystrophy, has filed more than 180 A.D.A. lawsuits in California. The New York Times Magazine looks into Mr. Dytch’s reasoning and the barriers he faces at numerous locations because of his disability.

U.S. Rep. Doug LaMalfa’s office released several videos of the congressman tearing down marijuana greenhouses with a bulldozer during a sheriff’s office operation as part of a court-ordered abatement, The Sacramento Bee reports. Community advocates said the videos of him targeting poor people, primarily of Asian descent, inflamed tensions in the region.

After an article published by Mission Local last week incited public outrage, Uber will now display marketplace fees and drivers benefits fees to drivers in California. In its story, Mission Local reports “the discrepancy found between what Uber tells drivers a customer pays and what customers actually pay.”

The Olympics have never had an athlete like the skateboarder Nyjah Huston or a story like his. He is the second-most-famous skateboarder on the planet. (Tony Hawk may never surrender the title.)