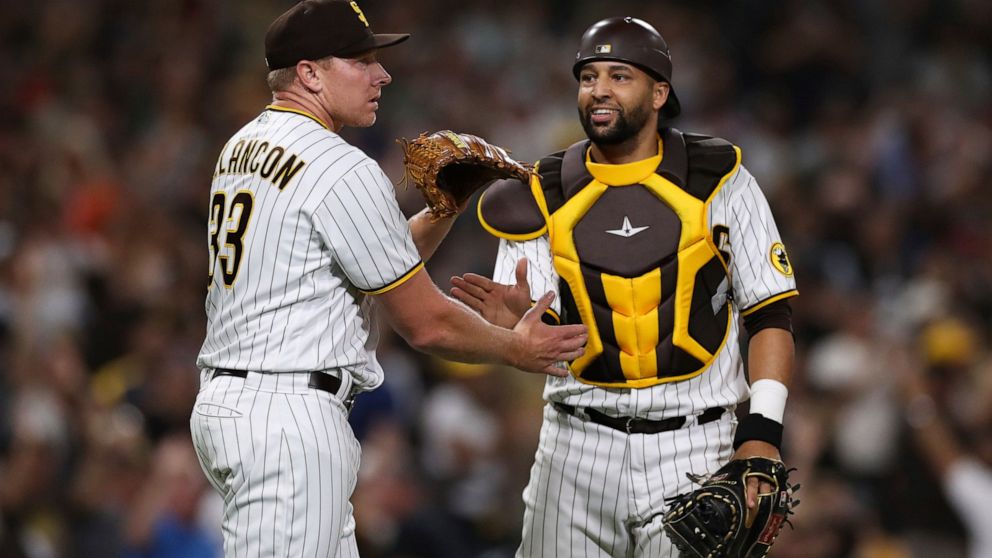 SAN DIEGO — Reliever Miguel Diaz rejoined the Padres for the fourth time this season and was part of a dominant performance by the San Diego bullpen Friday night in a 4-2 win over the Colorado Rockies.

Trent Grisham drove in two runs, a day after his game-ending single beat Washington 9-8 when the Padres rallied from an eight-run deficit, matching the biggest comeback in team history.

Four San Diego relievers combined for 5 1/3 scoreless innings, allowing just one hit and striking out seven. The Padres have won nine straight against Colorado at Petco Park, their longest active home winning streak against any opponent.

With Blake Snell put on the injured list a day after All-Star Yu Darvish exited early with a tight back, the Padres called up Reiss Knehr, who owned a 3.90 ERA in 11 starts with Double-A San Antonio.

“It was unbelievable. A dream come true,” Knehr said of his first game in the majors. “It’s one of those things that nobody can take away from you. It was a great feeling.”

Knehr escaped a bases-loaded, no-out jam in the second inning with minimal damage, only giving up one run on a walk to Elias Diaz.

“(The win) doesn’t happen without Reiss giving us the start and Diaz giving us the length,” San Diego manager Jayce Tingler said.

Knehr allowed another run in the fourth inning on an RBI double by pitcher Kyle Freeland that made it 2-0. Knehr lasted 3 2/3 innings, giving up two runs and three hits.

“Things could have gone south on him (Knehr) in the second,” Tingler said. “He was able to take a deep breath and get back in the zone, which was huge.”

Recalled from Triple-A El Paso for the fourth time this year, Diaz took over and permitted one hit in 2 2/3 innings.

“The highlight of the night for me was Diaz. It’s the best I have seen him pound the zone,” Tingler said. “He threw strikes with all of his pitches. His changeup up really bottomed out and fell off the table.”

Relievers Tim Hill and Austin Adams combined to get the next five outs and closer Mark Melancon earned his 27th save by retiring the side in the ninth inning.

With San Diego trailing 2-1 in the sixth, Jake Cronenworth led off with a single, Manny Machado doubled and Tyler Kinley replaced Freeland (1-3).

“Hitting is contagious and guys feed off that throughout the lineup,” Cronenworth said. “It seems like it’s a different guy every night.”

Tommy Pham singled in the seventh and later scored on Machado’s single.

“Cronenworth made a lot of things happen to start some innings,” Tingler said. “Manny continues to come up big, nothing maybe bigger than that add-on (run), which is so critical.”