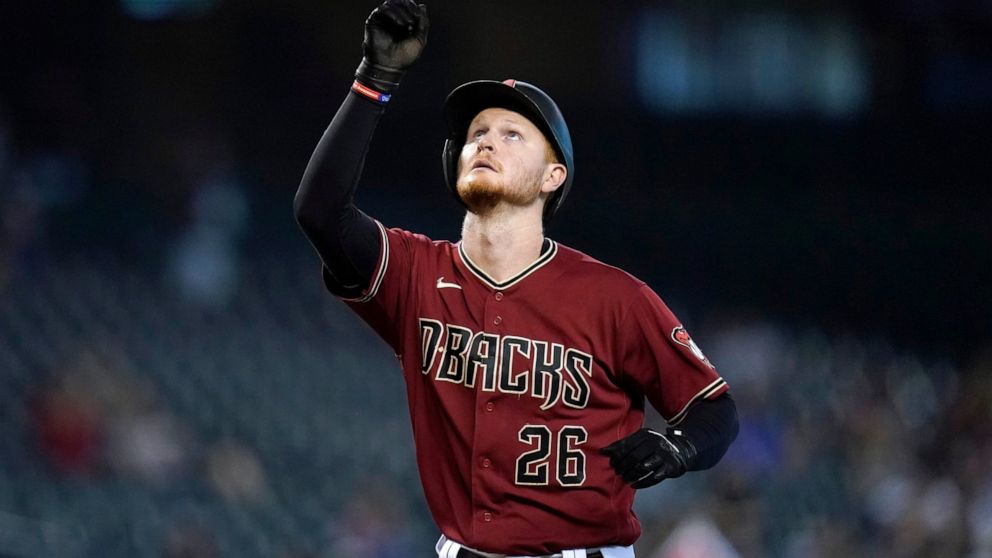 PHOENIX — Pavin Smith and Daulton Varsho have hit back to back in the lineup for a few seasons while coming up through Arizona’s system. But they had never hit consecutive home runs — until Wednesday.

And they picked a good time to do it: in the seventh inning of a tied game. Smith hit his ninth of the season and Varsho followed with his second, and the Diamondbacks held on for their fourth straight victory, 6-4 over the Pittsburgh Pirates.

“It finally happened,” Smith said. “We’ve been doing this for three, four years and always talked about it.”

Smith connected on a changeup from Duane Underwood Jr. (2-3) leading off the seventh to break a 4-4 tie, and Varsho followed with a blast to right against a fastball.

The Diamondbacks may have lost their hottest hitter, however. Lovullo said after the game that Josh Rojas has a dislocated left pinkie, suffered on a failed steal attempt in the eighth.

The finger was set back into place and Rojas was having tests after the game, Lovullo said. “We’re hoping for the best-case scenario and he’s day to day, but we’ll have to see.”

Rojas, who mostly plays second base but has seen time at shortstop and in the outfield, is batting .390 in his last 12 games for Arizona. He was 2 for 4 with a run scored, a double, a walk and a stolen base.

The Diamondbacks won their 30th game of the season — against an MLB-worst 68 losses — and their fourth in a row to match their season-best winning streak. They won four straight from April 18-22, including three games at Cincinnati which was their only previous sweep of the season.

Brett de Geus (2-0) walked John Nogowski to force in the tying run in the seventh after the Pirates loaded the bases on three singles against Joe Mantiply. But de Geus retired Jacob Stallings on a double play to end the inning.

“We got out of a bases-loaded jam,” Lovullo said. “It was real nice to see that type of success.”

For the Pirates, a promising run that began with three consecutive wins against the NL East-leading Mets — capped by a big comeback on Stallings’ walk-off grand slam last Saturday — has turned sour.

After scoring six runs in the first against New York on Sunday, the Pirates ended up losing 7-6 and now have lost four straight, the last three to the team with baseball’s worst record. The Pirates now head to San Francisco to play the NL West-leading Giants.

“We played well that whole Mets series. We’re going have to regroup on Thursday (an off day) because we’re getting ready to play one of the best teams in baseball.”

All-Star Bryan Reynolds had three hits for the Pirates.

Joakim Soria retired the side in order in the ninth for his sixth save for the Diamondbacks.

Madison Bumgarner went five innings for Arizona in his second start since coming off the injured list (left shoulder inflammation). He struck out one, walked none and threw 79 pitches before coming out for a pinch hitter. He allowed three runs, but just one earned.

“It was nice to see Bum have another good outing,” Lovullo said. “He could have gone one more, but we had a limit of 90 pitches.”

Max Kranick, pitching on his 24th birthday, started for Pittsburgh after being recalled from Triple-A Indianapolis earlier in the week. He lasted three-plus innings, giving up seven hits and four runs.

Before the game, the Diamondbacks reinstated RHP Tyler Clippard from the 60-day injured list. The veteran reliever had been out since spring training with a sprained right shoulder. He pitched the sixth inning, allowing a leadoff bunt single to Stallings and retiring the next three, ending it by striking out Jared Oliva.

To make room on the roster, Arizona optioned RHP J.B. Bukauskas to Triple-A Reno. The Diamondbacks also claimed RHP Ty Tice off waivers from Atlanta and optioned him to Reno, and designated LHP Alex Young for assignment. Young had been optioned to Reno on Monday.

Pirates: Director of sports medicine Todd Tomczyk said RHP Chase De Jong, who was placed on the injured list after starting Monday’s game, had an MRI on his left knee and the team is awaiting results. … LHP Stephen Brault (left lat strain) continues his rehab assignment with Triple-A Indianapolis and will get another start there, Tomczyk said.

Diamondbacks: 3B Asdrubal Cabrera (strained right hamstring) played in an Arizona League game Tuesday. Lovullo said he will get “plenty of at-bats” in rehab before returning to the roster, just to make sure his leg is strong.

Diamondbacks: Off Thursday. RHP Zac Gallen (1-4, 3.86) opens the series against the Cubs in Chicago on Friday.