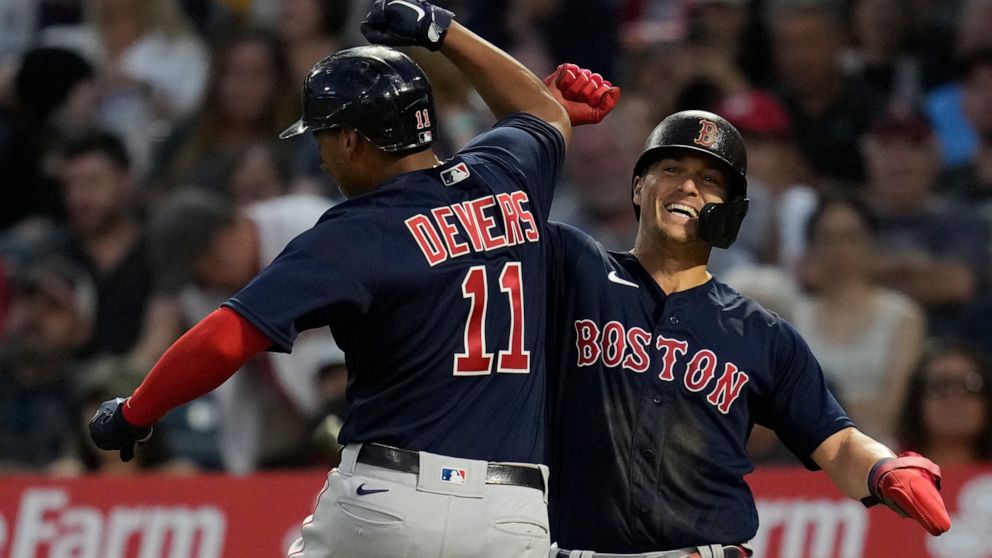 Rafael Devers hit a two-run homer and drove in three runs, and the Boston Red Sox retired Shohei Ohtani on a grounder to right field to end their 5-4 victory over the Los Angeles Angels

ANAHEIM, Calif. — Rafael Devers hit a two-run homer and drove in three runs, and the Boston Red Sox retired Shohei Ohtani on a grounder to right field with two Angels on base for the final out in their 5-4 victory over Los Angeles on Monday night.

Christian Arroyo also homered for the AL-leading Red Sox, who held Ohtani to a single on his 27th birthday and improved the majors’ best road record to 27-15. Devers’ 21st homer of his first All-Star season punctuated his three-hit performance in Boston’s 10th win in 11 games while backed by a loud contingent of West Coast fans.

Jose Rojas homered and added an RBI single in the ninth for the Angels, who fell back to .500 with just their second loss in eight games.

Adam Ottavino secured his seventh save even though he walked leadoff hitter José Iglesias in the ninth and then gave up Rojas’ two-out RBI single. David Fletcher singled off Devers’ glove at third to bring up Ohtani, but the major league homers leader smacked a hard grounder to Arroyo — Boston’s second baseman — in shallow right field, denying the Angels their third walk-off win in four days.

Ohtani’s final grounder left his bat at 101.3 mph and had an expected batting average of .910, according to Statcast. He went 1 for 5 and didn’t add to his 31 homers after hitting 14 in his past 17 games. He was also denied an RBI in the fifth inning when Danny Santana threw out Rojas at the plate after Ohtani’s single.

Martín Pérez (7-4) made it into the sixth inning for the Red Sox, giving up just one earned run on eight hits. Boston stayed in front thanks to superb defense all night at Angel Stadium, most notably when Kiké Hernández robbed Luis Rengifo of a two-run homer to center to end the second inning.

After Rojas was thrown out at the plate by Santana, who replaced Marwin González in left field two innings earlier, Hernández threw out Max Stassi trying to reach second on his drive to the wall in the sixth.

Boston added two outfield assists to its major league-leading total of 28 — and that didn’t count Arroyo’s game-ending play from well into right field.

José Suarez (3-2) threw 75 pitches, but made it through only three innings in his first start of the season for the Angels.

Arroyo, who had been sidelined since June 20 by a bruised right knee, connected for his fifth homer in the second inning of his first game back. Devers followed with an RBI single during Boston’s lengthy rally.

Devers connected off reliever Dylan Bundy in the fourth. Santana added an RBI single in the fifth.

Ohtani dropped a single into left in the fifth for his first hit that wasn’t a homer since June 27, but he was denied his 68th RBI when Rojas was called out on video review.

Fletcher extended his hitting streak to 19 games with a third-inning single. It’s the longest streak of his career and the longest for the Angels since Kendrys Morales went 20 straight in 2009.

Red Sox: González left in the third inning with right hamstring tightness. … INF Michael Chavis was sent down to Triple-A Worcester to make room for Arroyo’s return from injury.

Angels: 3B Anthony Rendon sat out with tightness in his left hamstring sustained Sunday. … OF Taylor Ward also didn’t play after jamming his right index finger into a base Sunday.

Ohtani (3-1, 3.60 ERA) makes his 13th mound start and his last start before the All-Star Game, hoping to bounce back from his dismal start at Yankee Stadium last week. Boston counters with first-time All-Star Nathan Eovaldi (9-4, 3.41).