Devastated by Disasters, Lake Charles Is Still Waiting for Help 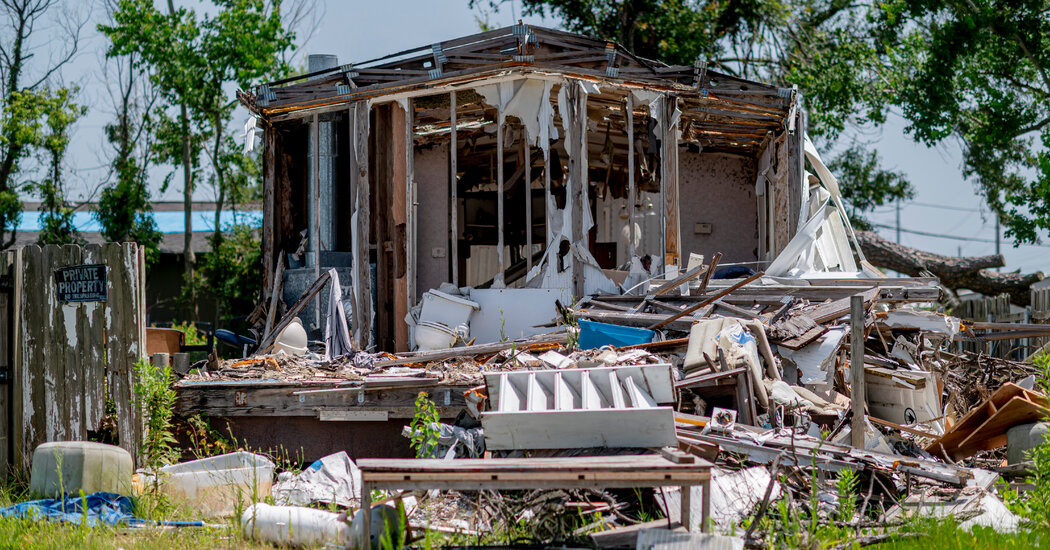 LAKE CHARLES, La. — Nic Hunter, the mayor of Lake Charles, has no doubt that elected officials in Washington are well aware of everything his city has weathered. They have told him so, repeatedly.

President Donald J. Trump flew to Louisiana last August after it was shredded by Hurricane Laura. “You took a big punch,” Mr. Trump said, “but you’ll be back.” President Biden called Mr. Hunter in May after Lake Charles — already hobbled by another hurricane after Laura and a powerful winter storm — was engulfed by a flood, undoing months of painstaking labor to bring the city back.

But Mr. Hunter is tired of kind words.

“We’re at a point now,” he said, “where the pats on the back and the verbal support and the letters of support are really insufficient and, quite frankly, almost a little insulting.”

Lake Charles, he said, needs urgent help. Millions of dollars in federal emergency funds poured into the city to help with immediate needs after the storms, but the mayor says it has been nowhere near enough.

It is a plea that Mr. Hunter has been making to virtually anyone who will listen — lawmakers, federal officials, journalists — since the devastation from Laura first became clear. His desperation became harder and harder to hide as one disaster after another pummeled the city and he struggled to convert the attention into something more than sympathy.

As he sees it, support has been mired in a congressional morass, and as the nation grapples fresh crises, like the resurging coronavirus pandemic and a punishing wildfire season, a medium-size working-class city like Lake Charles did not rank as a priority. But nearly a year later, many residents are still living in camper trailers or bunking with relatives while their homes remain uninhabitable.

“I thought there would be enough human decency, morality and bipartisanship to come together and rally around that cause,” Mr. Hunter said. “I’m not as hopeful today as I was in the past that that’s the case.”

Mr. Hunter’s crusade for Lake Charles has emerged as an unsettling harbinger of the kind of efforts other communities may have to undertake to draw attention and federal aid as a changing climate threatens to intensify a cascade of disasters across the country.

“He’s had to put himself out there,” Sara Judson, the president and chief executive of the Community Foundation of Southwest Louisiana, said of Mr. Hunter, who has led the city since 2017. “That’s part of what we’ve learned — that is what it takes. You have to wave your own flag as the community and express what you need.”

The Biden administration has vowed to take a more proactive approach to the dangers that looming disasters pose to local governments, particularly as forecasters have warned of another active hurricane season this year. In May, the administration announced that $1 billion would go toward disaster preparation and bolstering infrastructure to withstand extreme weather.

“It’s going to help communities, including those too often overlooked,” Mr. Biden said, adding, “It’s about having people’s backs in the toughest moments that they face.”

But those efforts have not addressed the uncertainty that endures after last year’s storms, leaving Louisiana officials to continue to press the federal government for relief.

Residents received $250 million in federal emergency funds for housing and other needs after the hurricanes, and the federal Small Business Administration approved $627 million in low-interest loans. But Gov. John Bel Edwards said Louisiana had $3 billion in unmet recovery needs, much of it coming from homeowners and renters.

Lake Charles and the southwestern corner of the state were the hardest hit by Laura, which was one of the most powerful hurricanes to hit Louisiana when it made landfall in August. Hurricane Delta cut a similar path through the state roughly six weeks later. That was followed by a winter storm that swept over the region, causing pipes to burst in homes and knocking out water systems. Then, heavy rainfall unleashed flooding in May.

The blue tarps covering damaged roofs are among the most overt measures of the city’s struggles. But nearly a year after Laura, the strife is also evident in the proliferation of billboards for lawyers offering to fight with insurance companies and in commiseration sessions among displaced residents in the lobbies of the extended-stay hotels where they have been for months.

“It’s just exhausting,” said Vanessa Jason, who drives a bus carrying refinery workers to jobs. “It’s very stressful, and there’s nothing really you can do about it.”

Her sister, Latasha Wright, said she could see the emotional toll it was taking on relatives and friends. “You hear they’re going through depression,” she said. “They’re staying in their house. They’re not even wanting to come outside.”

Laura peeled the roof off the home where Tonda Moreland has lived for more than 30 years. “Delta just finished up what Laura started,” she said. Then, pipes burst during the winter storm.

After months of commuting from a hotel more than 100 miles away in Houston, Ms. Moreland, a paralegal for a nonprofit law firm, was eager to move back into her home in May. Then, her home flooded, and contractors had to start over.

“I’m a positive person,” she said, standing in her living room with unfinished floors and freshly painted green walls. “So this is how I look at it: I’m going to be back in my home — eventually. It’s a bright light at the end of this tunnel.”

She sees herself as fortunate. Unlike others, she did not have problems with her insurance company. She also knew people who had nothing to return to. “It’s heartbreaking because I have so many people who want to come back,” she said.

But a shortage of housing has made finding an affordable place to live impossible for many. Apartment complexes were destroyed and have not been repaired. Hotel rates are double or triple what they were before the hurricanes.

There have been promises to rebuild Lake Charles in a more robust way. Local leaders have tried to sketch out plans for more resilient infrastructure that could even add to the city’s appeal, hopefully drawing outsiders.

Still, Mr. Hunter said it could feel like a luxury to direct attention decades down the line when the present remained dire for so many in his city.

Like other mayors who have been strained by the pandemic and the hardships that followed, Mr. Hunter has been tested. But Lake Charles is his home. He grew up in the city, worked in the restaurant industry and served as a parish police juror, the Louisiana equivalent of a county commissioner, before running for mayor. He was elected again in March.

Mr. Hunter has seen little choice but to draw as much attention to his city as possible. And in that regard, he has had some success: He has appeared on CNN, Fox News and NPR, and given repeated interviews with other national news organizations, including The New York Times. The Advocate, the state’s leading print news organization, even opened a bureau in Lake Charles, dispatching a seasoned foreign correspondent to live in the city and chronicle the recovery.

“If we weren’t screaming down here, I don’t know if y’all would be here,” the mayor told a reporter as he walked through one of the city’s battered neighborhoods. “I don’t know if we would be getting the attention from our congressional delegation and the president right now.”

Driven by optimism but also a drought of alternatives, Mr. Hunter keeps pushing. On Tuesday, he will join other local officials for a news conference, repeating the same message, hopeful that perhaps this time his city will get more than encouraging words in return.