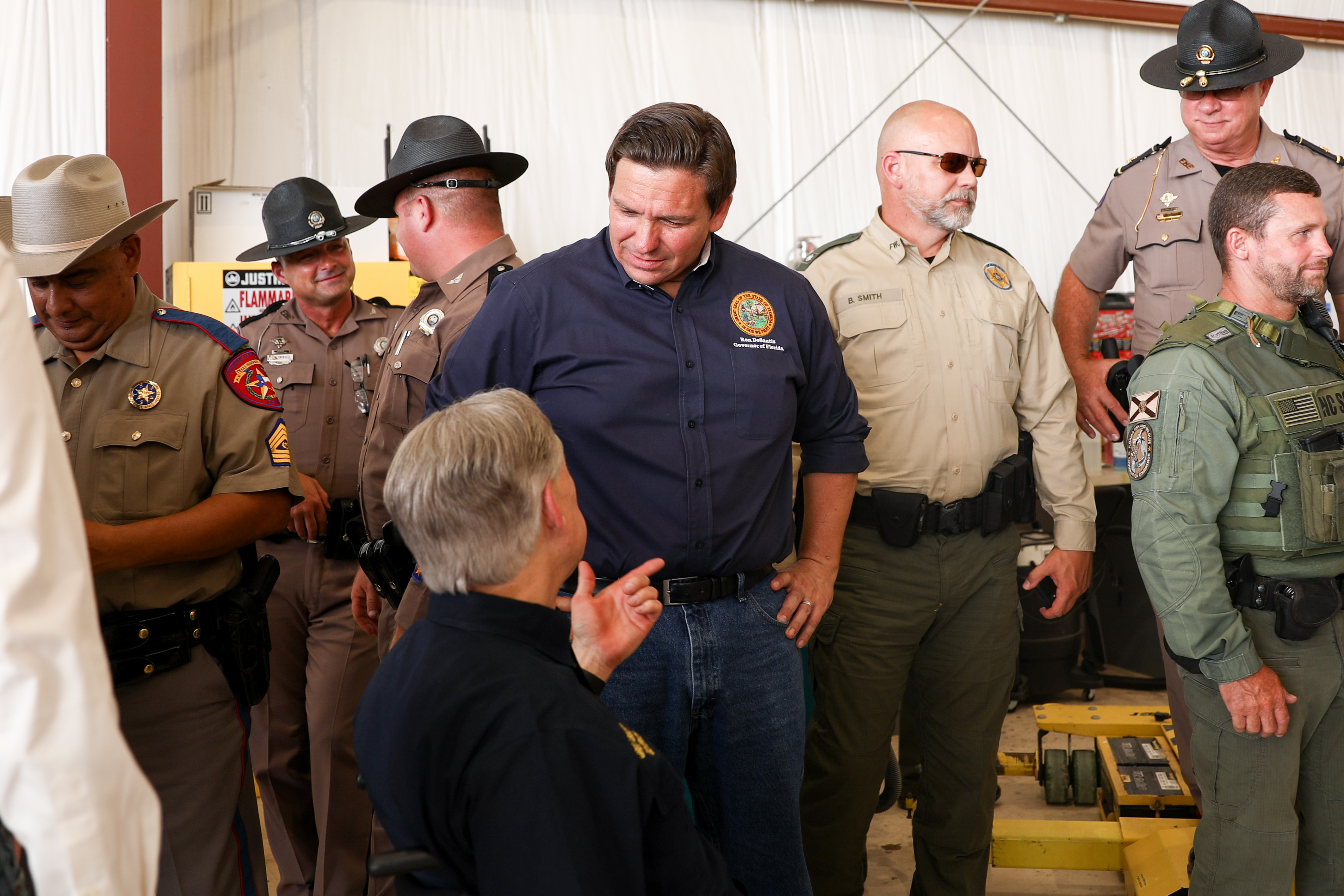 DEL RIO, Texas—Florida Gov. Ron DeSantis said he’s looking at “all available options” at the state level to deter and deport illegal immigrants, especially those planning to reside in Florida.

“We’re trying to figure out what all our options are because if there’s not a deterrent—and I’m a big supporter of the border wall, don’t get me wrong—but if there aren’t policies backing that up to enforce the law, then you’re still going to have people who are going to find some way to get in and violate the law,” DeSantis told The Epoch Times on July 17.

DeSantis met with Texas Gov. Greg Abbott and other state officials in the border town of Del Rio, which has become the second-busiest illegal crossing sector along the southwest border.

Border Patrol has apprehended more than 111,500 illegal aliens in the sector from February through June. Almost 615,000 individuals have been apprehended crossing into the state of Texas during the same time period.

Florida law enforcement officers deployed to the Lone Star State told DeSantis that about 70 percent of the illegal immigrants they’ve been involved in apprehending in the past three weeks are heading for Florida.

“That’s alarming, because you have a criminal element in there,” DeSantis said. “But then just the scale of what’s coming across the border, that’s going to put huge stress on social services, schools, health care, all these other things.”

DeSantis said he hopes the Biden administration will “reevaluate its failed policy,” but if not, he’s looking at the possible recourse states have.

“It’s one thing to say the federal government is supreme over immigration, but if they refuse to use that power, and refuse to execute the law, should states be allowed to step into that void? So we’ve actually looked at that—we haven’t necessarily arrived at exactly what you would do,” he said.

DeSantis said when he offered law enforcement assistance to Texas after Abbott called for help, all personnel who were deployed had volunteered to go.

“States always help us, [and] this is an important issue,” DeSantis said. The governor sent 50 officers to Texas from the Florida Highway Patrol, Department of Law Enforcement, and Fish and Wildlife at the end of June.

In the 23 days since, DeSantis said the Florida officers have helped apprehend more than 2,800 illegal aliens and assisted with more than 100 criminal arrests for felonies ranging from human smuggling to drug trafficking.

DeSantis said he’s also concerned about the illegal aliens currently incarcerated in Florida who would have previously been taken and deported by Immigration and Customs Enforcement (ICE) but will instead be released into communities.

“These are people that are already felons, and they’re being released. And so that’s a huge, huge problem,” he said.

Florida filed a case against the Biden administration in March to keep President Joe Biden from blocking deportations. The complaint, filed by Florida Attorney General Ashley Moody, accuses the administration of a radical policy change that would allow criminal aliens to avoid deportation after serving time for crimes such as domestic violence, burglary, or heroin trafficking.

The Department of Homeland Security on Jan. 21 issued a memo to suspend deportations of illegal aliens for 100 days, with the exception of those who have “either engaged in or are suspected of terrorism or espionage.”

“Are you just saying if the federal government decides not to do the job, that the states can’t do anything?” DeSantis said.

“Could we pay for a plane ticket to send them back to their home country? Could we put them on a bus to go back down to Mexico? I think you should be able to do it. So we’re working through the implications to see if you could get that done.”

But, DeSantis said, there’s no guarantee the home country will take their citizen back, “so you run into a lot of different issues. But we’re working through it.”

The governor argued that some immigration case outcomes need to be relitigated, as the facts are “so much more aggravated now” than when precedent was set.

The Arizona legislature had approved SB 1070 in 2010 in an attempt to secure its own border after it said the federal government was failing in its duty.

“I think that case was so wrongly decided,” Paxton told The Epoch Times on July 16. “And if we find the right case, we’ll take it back up.”

The governor signed into law a ban on sanctuary jurisdictions in 2019 that requires local and state law enforcement to cooperate with ICE. In 2020, DeSantis signed a bill that requires public employers and contractors to use the E-Verify platform to ensure legal status of employers. Private employers remain exempt.

“I think most people in Florida—we’re a very pro-immigrant state, we have a heavy immigrant population—but I think they want it to be lawful and I don’t think they want people coming in because of failed policies on the southern border,” DeSantis said.