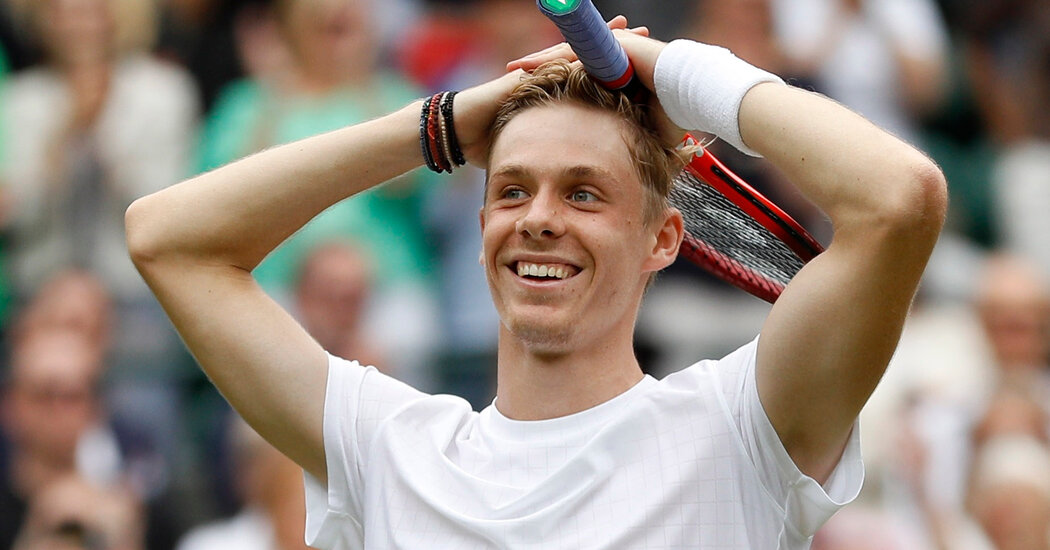 WIMBLEDON, England — As she coached him in Toronto as a child, Tessa Shapovalova told her young son not to mind the balls arcing over his head when he went to the net. Someday, she said, he would be tall enough to reach them.

“From a young age I never was a player that would sit back and wait for my opponent’s mistakes,” Denis Shapovalov said on Wednesday. “I always wanted to be the one dictating. I was always coming to the net from 10, 12 years old, getting lobbed back there, losing points.

“My mom always told me: ‘Later on, you’re going to grow, and this is going to be an advantage to you. It’s something that is yours. You have to keep and maintain it for the future.’”

Shapovalov, 22, has reached his first semifinal in a Grand Slam tournament at Wimbledon, where he will face Novak Djokovic on Friday with the hopes of becoming the first Canadian man to reach the final here since 2014.

“It was great that she had that vision for my game years ahead,” said Shapovalov, who is still coached by his mother. “It’s something that, like I said, I’ve always had.”

On grass courts, which reward assertive play more than any other surface, Shapovalov has been winning the races in rally after rally, round after round.

He has hit 214 winners, the most of the four semifinalists, despite having played one fewer match than the other three.

In his first-round win, he hit 58 winners to Philipp Kohlschreiber’s 30. After receiving a second-round walkover from Pablo Andújar, he blasted a two-time Wimbledon champion, Andy Murray, off the court in the third round, ripping 45 winners to Murray’s 16. In his fourth-round win, Shapovalov hit 52 winners to Roberto Bautista Agut’s 14.

“I played against a very good version of Denis,” the eighth-seeded Bautista Agut said. “I think he played great. He was hitting so hard. He was serving well.”

There have been, as Bautista Agut hinted, lesser versions of Shapovalov in past years; Shapovalov has also hit the most unforced errors of the remaining men at Wimbledon, with 170.

When he was 18, Shapovalov made a stunning arrival to the tour by beating top-seeded Rafael Nadal at the 2017 Montreal Masters, electrifying a night session crowd that included Wayne Gretzky in the front row. But in the intervening years, the results haven’t always materialized for Shapovalov and his free-swinging arm, and he has been forced to work on reining in his power.

“Maybe sometimes I’m a little bit too wild, and I don’t make the opponents earn it on the big points,” Shapovalov said. “I’ve been a little bit more conservative, actually, this tournament.”

Shapovalov’s more cautious play did not serve him well in the quarterfinals on Wednesday against Karen Khachanov: He lost the second and third sets.

“I knew in the fourth and fifth, I have to dictate myself and be aggressive,” Shapovalov said. “Otherwise, he was going to win the match. It comes pretty naturally to me. I’ve always been an aggressive player. I’ve always wanted to go for shots. It’s actually the other way around that I’ve had to learn to take a step back and put more pressure on the opponents, make them earn the points.”

He added: “Sometimes it does help having that naturally come to me, especially in a match like today when the opponent is playing so well and he’s not giving anything to you. You kind of have to go and take it yourself.”

“I think my game just elevated,” Shapovalov said. “It’s something to be super, super proud of myself for.”

Khachanov, in defeat, conceded that Shapovalov “went for it more” in crucial moments.

“It’s his type of game — he’s like this,” Khachanov said. “He also makes a lot of unforced errors, but that’s why I think he’s a tough player to play with because, especially on grass, when he pulls the trigger, he can make it. Sometimes you don’t expect where to run.”

To advance one round further, Shapovalov will need to penetrate the robust defenses of Djokovic. Shapovalov is 0-6 against him, but the two have never played on grass.

“You don’t get too many opportunities on his service game, especially here on grass,” Djokovic said.

“I’m sure that that’s going to be the biggest test I will have so far in the tournament, which is also expected — it’s semifinals,” Djokovic added. “I’m looking forward to it. It’s going to be a battle, and I need to be at my best.”