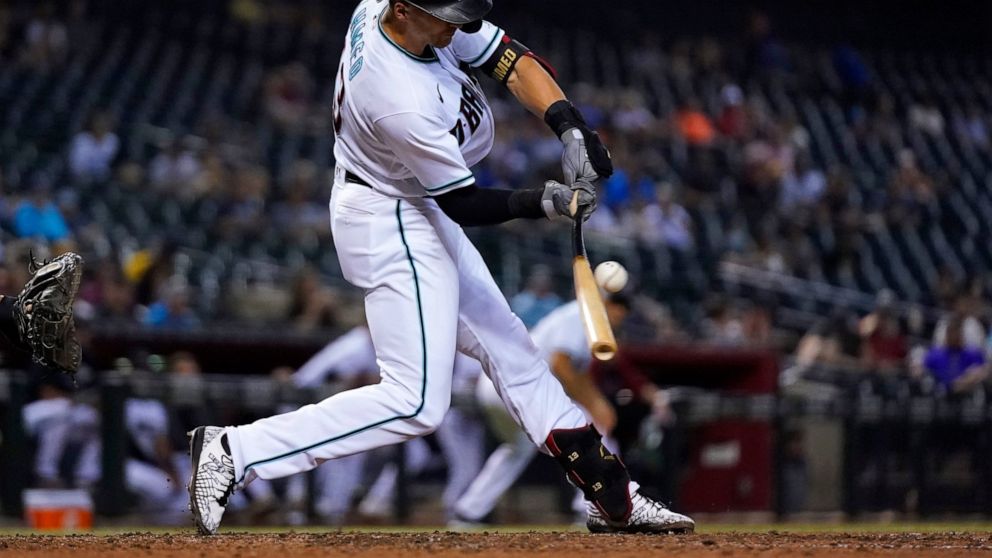 PHOENIX — Josh VanMeter began the night on the bench with a .182 batting average. The Arizona Diamondbacks infielder didn’t get into the game until the fifth inning — and ended up a homer short of the cycle.

VanMeter had three hits, including a triple and a double in an eight-run seventh, and the Diamondbacks roared back to beat the Pittsburgh Pirates 11-6 on Tuesday.

It was the third straight win for Arizona, its longest streak since April 25-27. The major league-worst Diamondbacks are 29-68 and have endured 15- and 17-game losing streaks since their last positive run.

VanMeter entered in a double switch in the fifth with the Diamondbacks down 5-1. He had a single that contributed to a run in the fifth, and drove in the first run of the big seventh with a triple off Austin Davis (0-1).

“I’ve been more aggressive in the (strike) zone,” VanMeter said. “Up until the last couple weeks I’ve been almost too picky, looking for one pitch in one spot. Now I’m looking for multiple pitches in a zone. The results aren’t always there but the process is working.”

VanMeter raised his average to .202 and drove in three runs in the inning after Arizona trailed 5-3 coming in. Josh Reddick’s two-out, two-run single off reliever Clay Holmes put the Diamondbacks ahead 7-5, and RBI hits by David Peralta and Daulton Varsho preceded VanMeter’s two-run double to the wall in center field.

The Diamondbacks scored single runs in the fourth, fifth and sixth before getting eight in the seventh.

“I felt like we were building innings, and as we continued we were going to break through. Reddick got it started,” Arizona manager Torey Lovullo said. “We stood up with two outs and delivered. We’re playing good baseball right now.

“VanMeter was in the middle of everything tonight,” the manager added. “It’s a credit to him and the coaches for making sure he’s ready. He’s looking to drive the ball and he’s getting some really good results.”

J.B. Bukauskas (2-2) won in relief, striking out two in a hitless seventh.

Arizona swept a doubleheader in Atlanta on April 25 that included seven hitless innings by Madison Bumgarner in a complete game that doesn’t count as a no-hitter. The Diamondbacks won their next game against the Padres at home two days later. That left them 12-11; since then they are 17-57.

Widener, making just his third start since April, gave up eight hits and five runs in 4 2/3 innings. He struck out eight. Widener was out with a strained right groin and was recalled from Triple-A Reno to start Tuesday.

Pittsburgh starter Tyler Anderson lasted six innings, giving up three runs. The lefty retired the first 10 batters he faced before permitting a run in the fourth. Josh Rojas singled for the Diamondbacks’ first baserunner, and Eduardo Escobar doubled down the right-field line to drive in Rojas.

Arizona scored another run in the fifth on four singles, the last by Nick Ahmed, but Anderson escaped further trouble by getting Rojas to hit a comebacker for an inning-ending 1-2-3 double play. Walker doubled home Escobar, who had walked, in the sixth to make it 5-3.

Pirates outfielders made a pair of outstanding plays. All-Star center fielder Bryan Reynolds made an all-out diving catch to rob Reddick of a hit to end the second. In the seventh, Ben Gamel took an extra-base hit away from Escobar with a leaping catch as his back hit the wall in left-center.

Diamondbacks: Widener replaced OF Alex Young, who was optioned to Reno after Monday night’s game.

Marte, who was batting .370 when he went down, is still some time away from returning. Lovullo said Marte still has to run out of the box and has yet to change direction when running forward.

Arizona has signed its third-round draft pick, RHP Jacob Steinmetz, a high school pitcher from Long Island in New York. The 6-foot-5, 220-pound Steinmetz became the first known practicing Orthodox Jewish player selected in the draft. He plays on the Sabbath, but walks to games on those days to avoid taking transportation. He also eats only Kosher food. No Orthodox Jewish player has played in the major leagues.

The Diamondbacks will start Bumgarner (4-6, 5.35) on Wednesday afternoon against a Pirates starter to be determined.