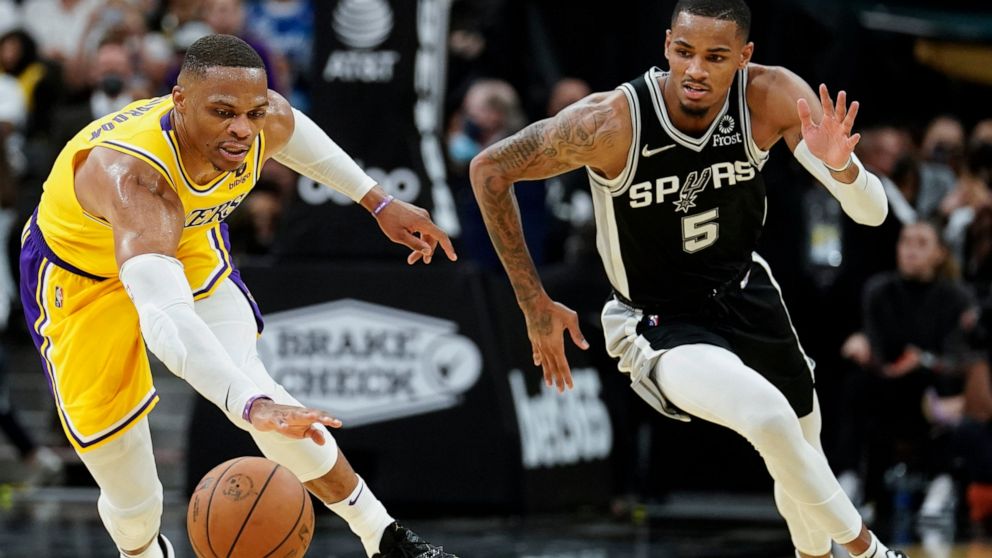 Dejounte Murray had 21 points, 15 assists and 12 rebounds for his fifth career triple-double, and he missed a jumper in the closing seconds that would have won it for the Spurs. Jakob Poeltl added 27 points and 14 rebounds for San Antonio, and Lonnie Walker IV had a season-high 21 points.

James missed the Lakers’ first road game of the season with a sore right ankle, an injury that occurred in Sunday’s win over Memphis. The Lakers decided to be cautious with the early-season injury.

Davis and Westbrook had season highs in scoring. Playing before a sold-out AT&T Center that was equally divided between the two teams, the Lakers won their second straight to reach .500.

Westbrook, acquired in an offseason trade, had 15 points in the final quarter and overtime to eclipse his previous high of 15 points with the Lakers.

Davis gave the Lakers a pair of scares after tweaking his right shoulder in the opening quarter and bumping his right knee in the final seconds of regulation. He still played a game-high 42 minutes.

Walker made three consecutive 3-pointers that sparked an 18-3 run to close the third quarter that gave the Spurs a 97-85 lead.

The Lakers took advantage of starting 6-foot-10 Davis and 6-11 DeAndre Jordan against 7-foot Poeltl and 6-5 Keldon Johnson. Davis and Jordan combined for 14 points on 16 attempts in the first quarter and had 11 rebounds.

Lakers: Coach Frank Vogel said James is “questionable” for Wednesday’s game at Oklahoma City. Vogel said this injury is in a “different spot” from the right ankle injury James suffered through late last season. … Davis remained on the court clutching his right shoulder in the opening minutes of the first quarter after a ferocious block of his attempted dunk by Poeltl. Davis’ arm recoiled and he fell to the court from the brunt of the block, leading James to rise from his seat on the bench in concern.

Spurs: Murray is fourth in career triple-doubles in franchise history, trailing David Robinson (14), Alvin Robertson (8) and Johnny Moore (6). … Walker has made five 3-pointers in three previous games, the most recent against Milwaukee on March 20.

Lakers: At Dallas on Thursday.