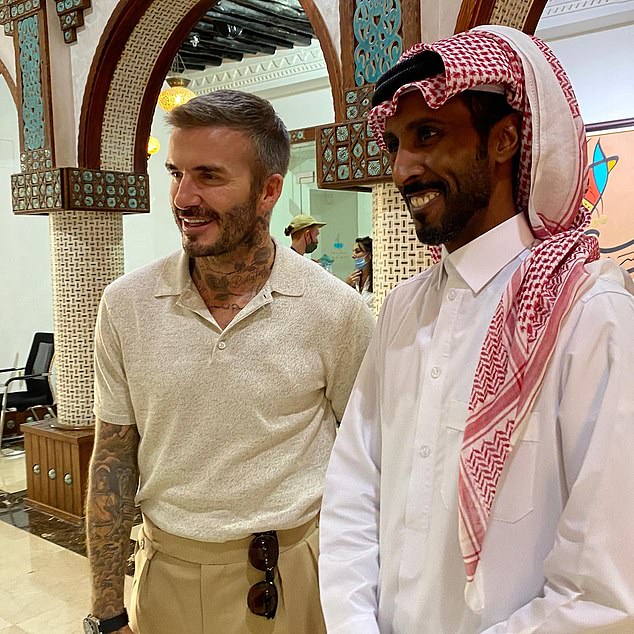 By Matt Verri For Mailonline

David Beckham is believed to have agreed a £150million deal to become an ambassador for the country over the decade, which will result in him being the face of the 2022 World Cup.

The England legend was pictured in the country earlier this month, taking in various sights including some of the stadiums to be used for next year’s tournament.

According to The Sun, Beckham will have an official role as part of a deal to be announced next month that will also see him promote tourism and culture in Qatar.

It’s reported that the 46-year-old was told rainbow flags would be allowed at the World Cup, in a country which has faced criticism for its human rights record, especially towards gay people and women.

‘David has always talked about the power of football as a force for good on many levels,’ a spokeswoman for Beckham told The Sun.

‘As we reach the one year to go point he will join the wider football community that is coming together for the World Cup 2022 and he’s looking forward to what he thinks will be a great tournament.’

Beckham’s relationship with Qatar is not a new one, stemming back to his time as a player at Paris Saint-Germain.

It is understood the ambassadorial deal came about as a result of Beckham’s close friendship with the Qatari president of PSG, Nasser Al-Khelaifi, when the former Manchester United star played for the club in 2013.

The pair were photographed laughing together at an international match in Qatar in 2019 and Beckham has become a frequent visitor to the country – he is due back in Qatar next month to watch the Formula One Grand Prix hosted by the desert state.

Speaking in 2019 about the World Cup in Qatar, Beckham spoke of his jealously at not getting the chance to be there as a player.

He said: ‘I think as a player and a fan you want to visit a World Cup competition with great facilities, safe facilities, great hotels and great culture – and that’s what Qatar is all about.

‘I wish I was still playing because to play in stadiums like this, it’s a dream. Players are going to be spoilt.’

Beckham became close with Qatari president of PSG, Nasser Al-Khelaifi, in his time in France