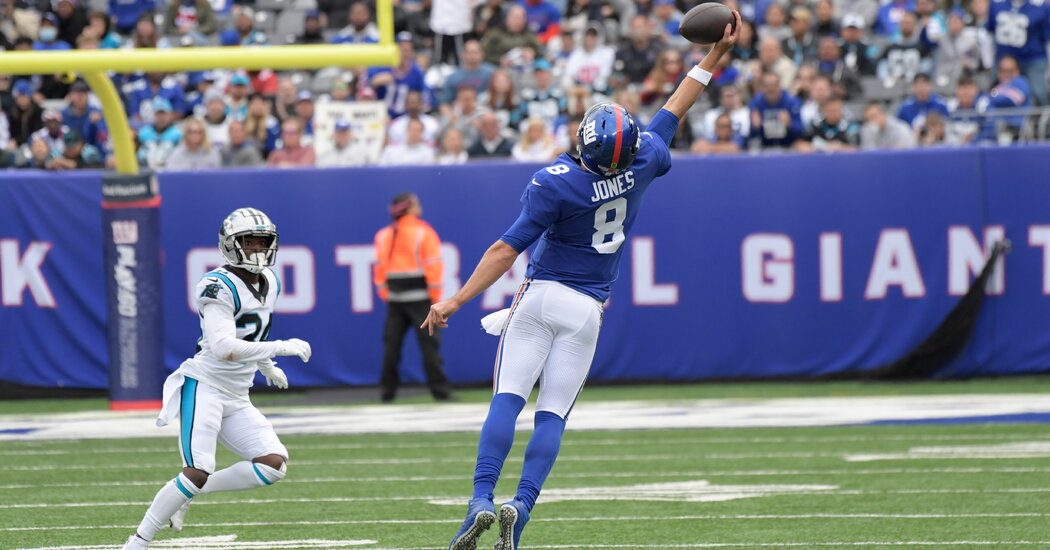 The longest play on the Giants’ first touchdown drive on Sunday involved Daniel Jones and a leaping, one-handed reception.

Jones, the Giants’ quarterback, did not throw the ball. He caught it.

And as he caught it, cradling the high pass near the Carolina sideline, he was hit. Hard. Coming from the left, Panthers safety Sean Chandler smacked Jones’s helmet — accidentally, it appeared — with his own. Jones’s helmet slammed against the turf.

He got right up.

But two weeks ago, Jones didn’t. He sustained a concussion in a brutal helmet-to-helmet collision during the Giants’ loss at Dallas. Dazed, he struggled to walk and was ultimately carted off the field as part of the N.F.L.’s five-step concussion protocol. But he passed the protocol in time to play last week against the Los Angeles Rams, and he was healthy on Sunday when, with about five minutes remaining in the third quarter, Jones handed the ball off and then ran downfield to await a pass.

The result of both the gadget play (a 16-yard gain) and the game itself (a 25-3 Giants victory) overshadowed the most important aspect of the whole endeavor: Why, considering Jones’s recent head injury, was it even called at all?

That question was not asked afterward of Coach Joe Judge, who did, though, discuss Jones’s toughness. He definitely showed it, Judge said.

Had he been asked — and, more relevantly, been truthful in his response — Judge might have said the Giants (2-5), with jobs in jeopardy amid another desultory season, need to win games, and they determined that play at that time, their version of the famed Philly Special, would help them do so.

Or that with so many offensive starters out injured — their top three receivers, their starting left tackle and their star running back — the Giants needed to offset their talent drain with creativity.

Or that because every snap exposes players to injury risk, there’s no reason to hold anything back. That would be considered playing scared and contradict the ethos espoused by Judge, when asked why he left in Jones for the entirety of last week’s 38-11 defeat to the Rams: “We’re going to compete for 60 minutes.”

That is a defining test of desire in the zero-sum N.F.L., where players’ livelihoods depend on their availability. In a sport rife with violent hits, where helmets and pads protect but do not insulate and each play seems to evoke a 22-car pileup, no body part is safe. Every participant — from coaches to players — not only understands that grim reality but embraces it. Sometimes, after getting hurt, they pop back up. Sometimes, they do not.

Patrick Mahomes was fortunate on Sunday to have escaped a serious head injury after absorbing a knee to the helmet in Kansas City’s loss at Tennessee. Like Jones against Dallas, Mahomes was staggered and needed help getting off the field. Unlike Jones, Mahomes passed concussion protocol and, though Coach Andy Reid held him out the rest of the game, was permitted to speak with the news media afterward.

“I feel fine now,” Mahomes said, adding later: “You get hit pretty hard. Sometimes you just want to lay there.”

It is possible Jones felt that way on Sunday, too. But he, like so many others, prides himself on his resilience — on his toughness. His football coach at Charlotte Latin School, Larry McNulty, likes sharing the story of how, as a scrawny high school sophomore, Jones was hit so hard that McNulty thought he was dead. The blow merely dislodged Jones’s helmet and mouthpiece. Rising from the grass, he looked McNulty in the eye and said, “Get me a damn helmet.”

That attitude, coupled with Jones’s athleticism, endeared him to the Giants in the 2019 draft, and it compels the team’s offensive coordinator, Jason Garrett, to call runs for him, to take advantage of his speed. Against Dallas, Jones couldn’t outrun two defenders to the end zone pylon on a keeper, and linebacker Jabril Cox drilled him with his helmet. Garrett, when asked four days later about the play, said that they would be “foolish” not to capitalize on Jones’s ability as a runner but that they had to be “certainly aware” of not putting him in dangerous situations.

He added that he doubted there was anything else Jones could have done to have avoided injury.

It’s unlikely that Garrett intended that statement to land as it did. But using that phrase — it didn’t work out for us — is quite the euphemism for the quarterback’s enduring a head injury.

Jones, fortunate to have avoided another one on Sunday, said he wasn’t certain whether Chandler’s helmet hit his. He would have to look at it, he said. And he can. It’s on film, for everyone to see.