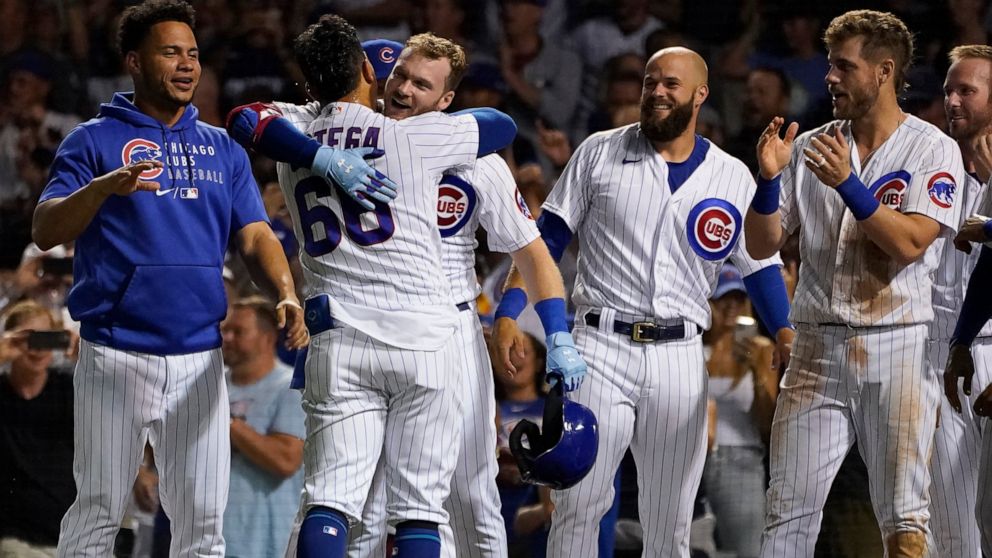 CHICAGO — Rafael Ortega hit a walk-off home run in the bottom of the ninth inning and the Chicago Cubs ended their longest home losing streak with a 6-4 win over the Colorado Rockies on Monday night.

Pinch-hitter Jason Heyward started the ninth with a single, and Ortega came up an out later and hit the game’s only homer to right as the Cubs scored five runs in the final two innings to snap a 13-game losing streak at Wrigley Field, the longest in franchise history.

“It’s no secret we haven’t won recently,” Ortega said through a translator. “We haven’t done well, but this shows the fight we have. It really felt good today to get that win.”

Reliever David Bard (7-9) allowed the game-winner after a walk-filled eighth inning helped the Cubs to get closer.

“I don’t think I’ve smiled after a game in a while,” said Cubs manager David Ross, whose team is 5-18 since the trade deadline. “It was nice.”

Rockies reliever Jhoulys Chacin walked the bases loaded on 12 straight pitches to start the eighth and Michael Hermosillo doubled to cap a three-run rally that tied the game at 4-all.

“That was an aberration,” Rockies manager Bud Black said of Chacin’s dozen pitches. “That was a tough one for J.C. No one feels worse than him.”

Sam Hilliard singled home a pair to cap a three-run first for the Rockies, who later got a sacrifice fly from Connor Joe. C.J. Cron had three hits for Colorado, which dropped its second straight after a five-game winning streak.

Manuel Rodriguez (2-2) earned the victory after pitching the ninth for Chicago.

The Cubs also loaded the bases with no outs in the sixth, but Antonio Senzatela gave up just a run after getting David Bote to ground into a double play. Hermosillo’s pop-up ended the inning.

Kyle Hendricks, seeking an MLB-best 15th win, gave up the first four Colorado runs on nine hits while striking out six with no walks.

Senzatela is still looking for his first victory since June 2 after allowing five hits and an earned run while striking out six in the first six innings.

The Cubs’ first good scoring chance came in the fifth inning, when Andrew Romine walked and Hendricks followed him with a two-out single. Colorado third baseman Ryan McMahon kept the home team scoreless, however, by tracking down Rafael Ortega’s blooper in shallow left with his back to the plate.

Rockies: OF Raimel Tapia (toe sprain) did a variety of drills before the game and could begin a rehab assignment later this week. He’s been on the 10-day injury list since Aug. 8. … Infielder Rio Ruiz was recalled from Triple-A Albuquerque and INF Alan Trejo was optioned there before the game.

Cubs: Ross said INF Nico Hoerner did not re-injure the right oblique that sent him to the injury list during Monday’s rehab game with Class-A South Bend. The club will re-evaluate Hoerner, who’s been out since July 29, later this week.