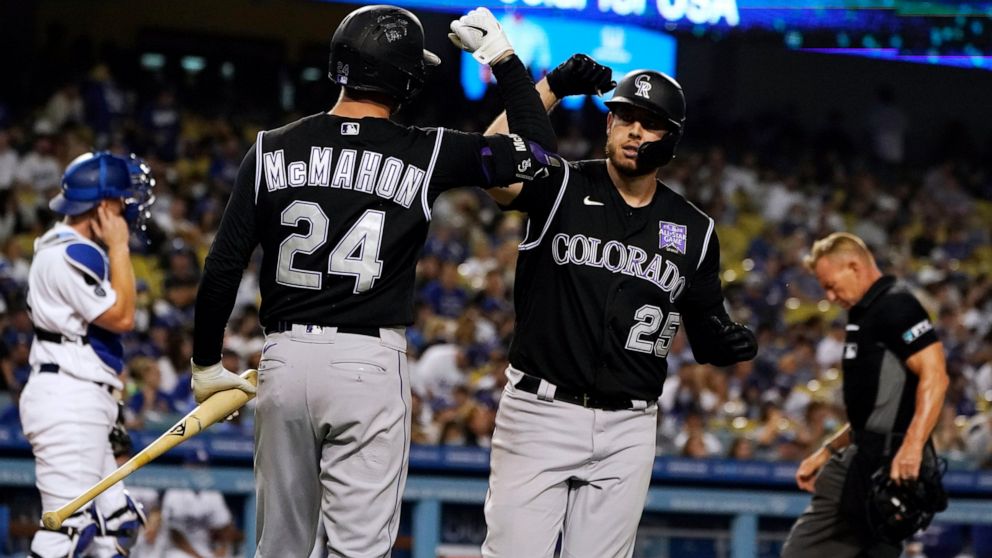 After striking out twice, Cron sent a 482-foot shot off Andre Jackson next to the bar seating above the Dodgers bullpen in left field for his major league-leading 30th RBI in August and his 23rd homer of the season.

The Rockies improved to 16-47 on the road in a game in which all the runs came on homers.

The Dodgers missed a chance to gain ground on NL West-leading San Francisco and remained 2 1/2 games behind the Giants, who lost 6-5 at Atlanta. The Dodgers had won 16 of 18 coming in.

Mookie Betts had a leadoff single in the ninth after going hitless in his first three at-bats and moved up on a wild pitch from Carlos Estévez, who then bore down. Pinch-hitter Max Muncy struck out swinging, and Corey Seager and AJ Pollock took called third strikes to end the game. The umpiring crew was booed walking off the field.

“That inning didn’t cost us the game,” Dodgers manager Dave Roberts said. “Punching 12 times, not a walk, not a good performance offensively. We really didn’t do anything.”

Estévez earned the save.

“I kind of felt I was right there with Este, grinding with him,” Freeland said. “We all know how the Dodgers can get rolling at the drop of a hat, and Este did a great job shutting that down.”

Elias Díaz homered leading off the ninth, eluding a leaping Pollock at the wall in left and extending Colorado’s lead to 4-2.

Díaz got run down by his own first baseman in the third. The Colorado catcher was tracking Justin Turner’s popup near the plate when Cron came charging in and struck Díaz in the leg.

The grimacing Díaz went down on all fours after he made the catch. He walked slowly off to end the inning, but stayed in the game.

Charlie Blackmon hit a two-run homer in the first off opener Brusdar Graterol, giving Colorado a 2-0 lead. It was the first homer allowed this season by Graterol.

The Dodgers tied the game at 2 in the third on solo shots by Will Smith and Trea Turner. Smith’s 21st homer hit the left-field foul pole. Turner’s career-high 20th homer landed in the lower left-field seats with two outs.

The Dodgers’ offense generated just four other hits: an infield single by Seager, two singles by Smith and Betts’ single.

Freeland (5-6) allowed two runs and four hits in six innings. The left-hander struck out seven and walked none. He retired his first seven batters while improving to 4-0 in his last five starts.

“I love pitching here, I love taking wins from these guys, I love beating them in their own park,” Freeland said.

Jackson (1-1) gave up one run and four hits in 4 2/3 innings. The right-hander struck out two and walked none.

Graterol pitched the first inning before turning it over to Jackson, who was recalled from Low-A Rancho Cucamonga earlier in the day. Jackson was optioned to the minors a day after making his major league debut on Aug. 16 against Pittsburgh.

Rockies: INF Trevor Story got the day off after aggravating a left leg injury two days earlier against the Cubs. He could return to the lineup on Saturday.

Dodgers: LHP Clayton Kershaw (left elbow inflammation) threw his second bullpen session of the week and could have another one on Monday. “He’s still not ripping it 100 percent, but it was a positive day for Clayton,” manager Dave Roberts said. … Muncy didn’t start for a second straight game with back tightness, but he pinch hit in the ninth.

Dodgers: LH David Price (4-2, 3.82) has thrown over 50 pitches in each of his last four starts. He’s coming off a loss to the Mets in his last start, allowing three runs and three hits in four innings.