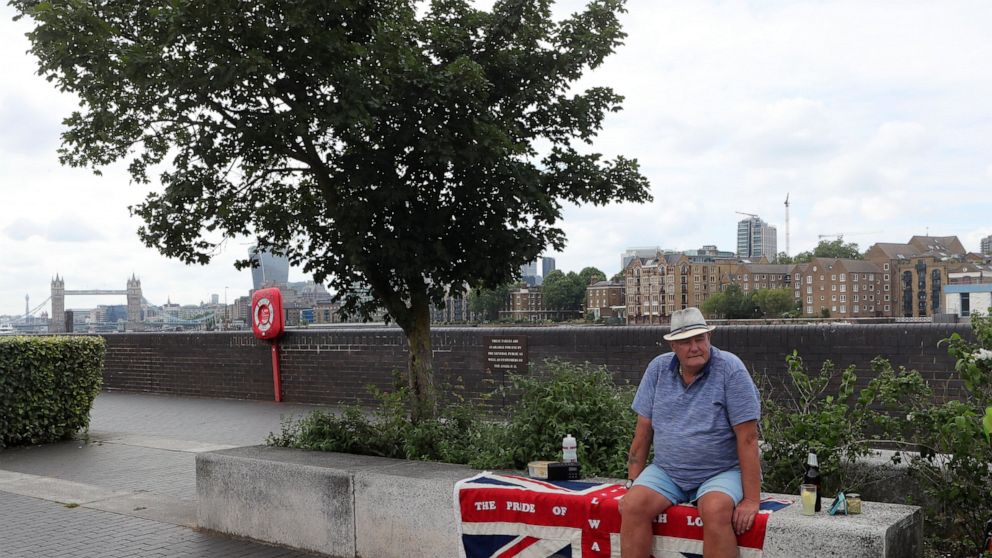 LONDON — There are no doubt a few hangovers across England on Thursday after a night of wild celebrations in the wake of the national soccer team’s victory over Denmark in the European Championship semifinals.

There will likely be many, many more on Monday morning if England manages to beat Italy in the final, its first in a major tournament since winning the 1966 World Cup.

The worry is that beyond the headaches and the grouchiness, the outpouring of joy will worsen rising coronavirus infection rates, particularly among younger men.

“Whilst association does not necessarily mean causation it is difficult to escape the conclusion that celebrations around the Euros have been an important factor in driving up the epidemic in the U.K.,” said Paul Hunter, a professor in medicine at the University of East Anglia.

It’s clearly difficult to rein in the enthusiasm associated with England’s march to Sunday’s final.

There’s a lot of pent-up frustration out there that has been further fueled by the rigors endured during coronavirus restrictions — and a fair bit of booze. The British Beer & Pub Association predicted that fans across the country would consume 6.8 million pints during the match alone.

The scenes inside Wembley Stadium were particularly raucous — more than 60,000 fans were allowed to attend the match. Long-suffering England supporters outnumbered their Danish counterparts by around six to one.

Two England fan favorites — Neil Diamond’s “Sweet Caroline” and the Lightning Seeds’ “Three Lions,” with lyrics by comedians David Baddiel and Frank Skinner — were sung with delirium, even by the England team and staff who joined in the singalong after the final whistle blew.

The partying didn’t end there. On leaving the stadium, fans released red-colored smoke and carried on singing as they swarmed out of the stadium and went home, no doubt to celebrate some more.

“It was a brilliant game, the atmosphere was absolutely amazing,” said 18-year-old Scarlet Devereux.

It wasn’t all positive though. European football’s governing body UEFA charged the English Football Association with three offenses at the stadium — the use of a laser pointer by fans, fireworks being set off and for disturbing the Danish national anthem.

Another 27.6 million people tuned in at one point during the match — the biggest peak football audience ever — and it seemed that most of them took to the streets the moment it ended.

People clambered on top of London buses, while others opted to stand on the roofing of the subway station at Leicester Square.

It was one of those nights.

John Engall, 65, who was a student during England’s only previous major triumph, said he felt “absolutely fantastic” after watching the match from Boxpark entertainment venue in Croydon, just south of London.

As is always the case, there’s always a cleaning up process following the festivities, and teams were out in force to remove litter on Thursday morning. Streets across England were strewn with empty disposable plastic pint glasses and food cartons. Even laughing gas canisters.

London’s Metropolitan Police said 23 arrests were made by officers across the capital following the match for offenses including common assault, public order and assault on police.

Concerns have also been raised that the team’s progress in the tournament is responsible for spreading coronavirus across the U.K., which is seeing a third surge in the pandemic as a result of the more contagious delta variant.

Although infections are less likely in an outdoor environment, public health experts warned that the virus could still find a way to spread, notably as tens of thousands of fans travel to and from Wembley, which after the final will have hosted eight of the matches in the Europe-wide tournament.

On Thursday, a closely-monitored coronavirus infection survey indicated that men gathering to watch England’s progress may be a reason why women were less likely to test positive for the virus.

Interim findings covering June 24 to July 5 from Imperial College London and polling firm Ipsos Mori show infections have quadrupled since the previous so-called React-1 study. According to the survey, one in 170 people in England is infected and there is a recent doubling time of six days.

Professor Paul Elliott, director of the React program from Imperial’s School of Public Health, noted that the prevalence of the virus is higher in men — 0.7% against 0.5% for women.

“We saw the same in Scotland around the Euros and visits to Wembley and matches in Glasgow,” he told Sky News. “Clearly it’s not just going to the match, but it’s going to the pub, being in close proximity.”

The worry must be that if England wins the tournament, many people will be less cautious, especially if they have had a drink or two, giving new impetus to the virus just before July 19 — when all remaining lockdown restrictions in England are set to be lifted.