Congress Awards Medals to Police Who Responded to Jan. 6 Riot 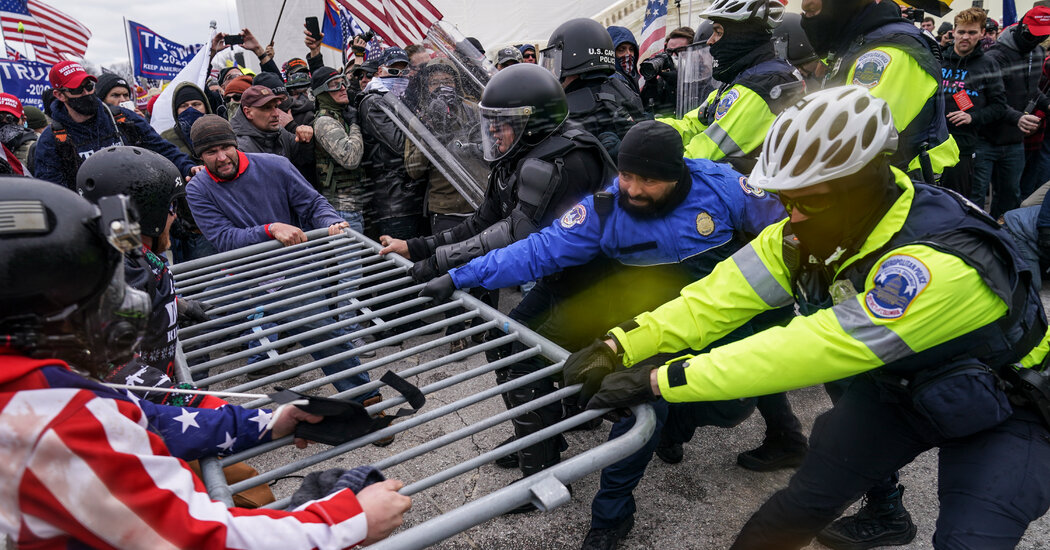 Congress moved on Tuesday to award its highest civilian honor to police officers who responded to the Capitol Jan. 6 riot, clearing a bill to give them the Congressional Gold Medal.

The Senate voted unanimously to approve the legislation during a week when District of Columbia police officials have announced that two more officers who were at the Capitol on Jan. 6 have died by suicide, bringing the total number to four.

“Jan. 6 unleashed many horrors, but it also revealed many heroes,” Senator Chuck Schumer, Democrat of New York and the majority leader, said Tuesday. “A day that many of us remember for its violence, anger and destruction was not without its share of bravery, selflessness and sacrifice.”

The legislation, which was shepherded by Senator Amy Klobuchar, Democrat of Minnesota, and Senator Roy Blunt, Republican of Missouri, now heads to the desk of President Biden, who is expected to sign it.

The Senate voted in February to award a Congressional Gold Medal to Officer Eugene Goodman, who led rioters away from the Senate chamber, and directed Senator Mitt Romney, Republican of Utah, away from the mob.

The House in June expanded the measure to apply to all members of the Capitol Police and Metropolitan Police forces who were involved in the Jan. 6 response, and passed that legislation overwhelmingly, though 21 far-right Republicans voted against the bill.

When Ms. Klobuchar brought that version up on Tuesday, nobody objected, allowing it to pass without a recorded vote, a rarity in the polarized Congress.

“I am still stunned by what happened in the House, where 21 members of the Republican caucus voted against this legislation,” Mr. Schumer said. “The Senate is different.”

The award means four Congressional Gold Medals honoring the officers will be displayed at the headquarters of the Capitol Police, Metropolitan Police, the Smithsonian and the Capitol. The plaque at the Capitol will list all the law enforcement agencies that helped protect the building.

The award comes during a dark week for the law enforcement officers who were on duty during the Capitol attack. The Metropolitan Police Department announced that two more of its officers who responded took their own lives last month.

Officer Gunther Hashida, a member of the Emergency Response Team within the Special Operations Division, was found dead in his residence on Thursday. Officer Hashida joined Metropolitan Police in 2003, the department announced. Officer Kyle DeFreytag, who joined the force in 2016, was found dead on July 10, it said.

Capitol Police Officer Howard S. Liebengood and Metropolitan Police Officer Jeffrey Smith, both of whom defended the Capitol during the attack, also took their own lives shortly afterward. Family members and congressional representatives of both have pressed to classify their suicides as line-of-duty deaths, a move that an aide to Speaker Nancy Pelosi told The New York Times she favors.

Around 140 police officers suffered injuries during the attack and 15 were hospitalized. Capitol Police Officer Brian D. Sicknick died of a stroke after clashing with the mob.

Last week, four officers described in excruciating detail the horrors they suffered at the hands of the rioters, recounting their experiences in sworn testimony to the select committee investigating the attack.

Top Jan. 6 Investigator Fired From Post at the University of Virginia