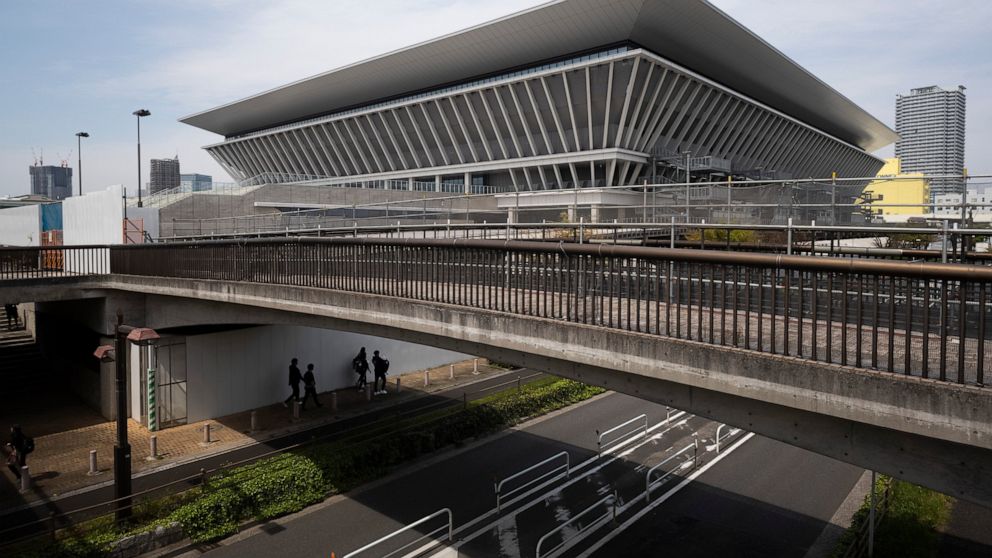 TOKYO — The aquatics arena near Tokyo Bay is an impressive structure indeed, the shimmering blue water of its two pools surrounded on three sides by towering rows of seats that, in a normal Olympic year, would’ve been packed with some 15,000 boisterous fans.

Of course, there is nothing normal about these Summer Games, which means the Tokyo Aquatics Centre is destined to be viewed a symbol of poor planning, gluttonous spending and terribly unfortunate timing.

Because of the coronavirus pandemic, these are the made-for-TV Olympics. No fans allowed. Hardly any of those 15,000 seats will be needed for the swimming competition, which is always one of the showcase sports of the Summer Games.

While it’s natural to feel sympathetic toward Tokyo for being stuck with a games that were delayed a year and are finally carrying on in a world still mired in death, misery and a desperate struggle to defeat COVID-19, the enormous price tag for these Olympics — $15.4 billion officially, maybe twice as much in reality — didn’t have to be nearly so high.

Which brings us back to the Tokyo Aquatics Centre.

For all the bold talk from the International Olympic Committee about shaving costs and making the games more financially viable, the powers-that-be somehow justified in their minds the need to spend more than a half-billion dollars on an aquatics stadium.

That was downright folly in Tokyo, which had plenty of existing arenas that could’ve been fitted with a temporary pool for swimming, while diving and water polo would have worked just fine in the smaller but equally impressive Tokyo Tatsumi International Swimming Center, with arching windows that provide a spectacular view of the bay.

The 3,635-seat natatorium, which has hosted numerous Japanese championships since it opened in 1993, is now dwarfed by the enormous new swimming stadium right next door.

It’s hard to envision how both facilities will be needed after the Olympics conclude on Aug. 8, even though the Tokyo Aquatics Centre will be downsized to a more manageable 5,000-seat capacity.

The new aquatics facility — which will also host diving and artistic swimming, while the older complex is used solely for water polo — is hardly the only example of Olympic spending run amok in Tokyo, despite oft-trumpeted efforts by Japanese organizers and IOC head man Thomas Bach to rein in costs.

In a region that already boasted enormous sports infrastructure, including most of the facilities that were used for the 1964 Tokyo Olympics, planners still pressed forward with a $1.4 billion rebuild of the national stadium, as well as exorbitant new facilities for gymnastics, volleyball and badminton.

For some reason, they decided not to use the 45,000-seat Tokyo Dome, home of baseball’s Yomiuri Giants, which surely could have been modified to host an indoor sport such as gymnastics or basketball. In nearby Yokohama, a 17,000-seat arena also was passed over as an Olympic venue.

All around the city and its sprawling metropolitan area, existing facilities were jilted by the Olympics because, as always, those in charge opted for more grandiose plans that they clearly thought would cast their city in a more favorable light.

This sort of hubris always leads to a financial boondoggle. Just ask Athens, or Sochi, or Rio de Janeiro, or Pyeongchang — host cities that were stuck with expensive, unnecessary venues once the Olympics headed off to claim their next financial victim.

Tokyo’s overspending was only compounded by the misfortune of being the Pandemic Games, which has cast a pall over a city that was so looking forward to showing off for the world.

Those sparkling new arenas are now nothing more than the most expensive television studios ever constructed. Those fans that would’ve been cheering from the stands are now forced to watch from home.

Sure, there will still be plenty of drama, plenty of world records, plenty of improbable upsets.

“I think the athletes are very adept at adjusting to the environment they are in,” said John Atkinson, the high performance director of Canada’s swimming team. “Walking into this phenomenal stadium is a lift for everyone. You can see that people are excited to be in here. Whether it’s one fan or 15,000, it’s the Olympic Games and it matters.”

It’s true, those who will enjoy the sparkling new venues are downright thrilled by the prospect of competing in such an architectural marvel.

“The main feeling I had was excitement,” New Zealand swimmer Zac Reid said. “Just walking into the complex made me feel fast.”

But no crowds are no comparison to the real thing.

“I think when you stand next to your competitors, you’re going to get the adrenaline anyway, but 100% it’s more exciting when you go up on the blocks with the crowd,” Swedish star Sarah Sjöström conceded. “You can’t compare anything with that. It’s amazing.”

And there’s a inevitable sense of pity for the Japanese people, who will pay an enormous financial price for their government’s glaring mistakes and a worldwide calamity they had no control over.

Paul Newberry is a sports columnist for The Associated Press. Write to him at pnewberry(at)ap.org or at https://twitter.com/pnewberry196, and his work can be found at https://apnews.com/search/paulnewberry.