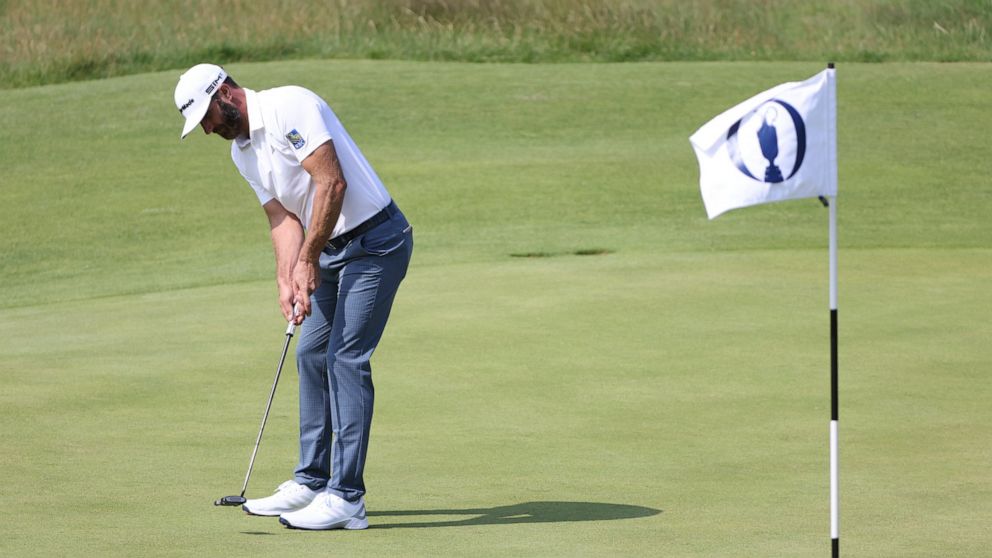 The Masters green jacket had been in his possession for just over three weeks and Dustin Johnson already was looking ahead at more major titles.

“Masters champion. It’s got a nice ring to it,” Johnson said, and the easy smile revealed as much. “And just because the ‘two-time major champion,’ that’s going to increase.”

That’s what they all say.

Doing it is different, not that Johnson or Rory McIlroy or Jordan Spieth — or even six-time major champion Phil Mickelson — needs a reminder.

Ten players have won the last 10 majors going into the British Open, not the longest such streak but an example of how much depth and parity make it even more difficult to win the championships that define careers.

And the world ranking doesn’t matter.

Johnson at the Masters last November was the first No. 1 player to win a major since McIlroy won the PGA Championship at Valhalla. That was seven years ago, and McIlroy hasn’t won another major since.

Gone are the days when winning majors was difficult for another reason: Tiger Woods.

No one summed it up better than Colin Montgomerie, as good as any player who never won the big one, heading into the majors in 2006.

“This major business is difficult because Tiger takes two of them,” Montgomerie said a month before the Masters. “So that only leaves two for everyone else. If you give one to Phil, Ernie and Vijay and Retief, that only leaves one, doesn’t it? So there’s only one left every year.

“And so it’s got to be your day, your time, you’ve got to be at the right place and the right time,” he said. “And then get fortunate.”

Johnson is only eight months removed from his greatest victory, and it seems even longer. He missed the cut in his next two majors, at Augusta National and Kiawah Island. He at least made it to the weekend in the U.S. Open (with two shots to spare) and worked his way into the fringe of contention, four shots back going into the final round.

He closed with a 74 and tied for 19th. That cost him the No. 1 ranking to Jon Rahm, who won his first major at Torrey Pines.

Why the pedestrian play?

Golf isn’t nice to everyone all the time. Johnson’s soundtrack for the last four months has included “I feel like the game is starting to come around” and “I feel like it’s close,” along with finally sharing he was having some nagging issues with his knee.

Due to the two-year rolling formula for the world ranking, Johnson didn’t play last week and still managed to arrive at Royal St. George’s as the No. 1 player.

This is the seventh consecutive major he has been at No. 1, and his 15th major overall. That’s three times as many as anyone else from his generation. It only goes so far.

McIlroy was at No. 1 in five straight majors, the first one the PGA Championship title he won in 2014. He didn’t play the British Open at St. Andrews that year because of a knee surgery from playing soccer.

The record since the world ranking began in 1986 belongs to Woods, of course. He held the No. 1 ranking 55 times at the majors and won 11 of those, the last one in 2008 at Torrey Pines with what doctors described as a double stress fracture in his left leg.

Greg Norman is next on the list. He was at No. 1 in the world for 24 majors and didn’t win on any of those occasions. He ended his career with two British Open titles. More was expected.

Johnson turned 37 last month, and while he has plenty of time on his side, he has not always been graced with good fortune that everyone — even Woods, at times — needs at a major.

It beats not having won at all. Lee Westwood is the best active player without a major, and no one has had more cracks at it. The British Open will be his 88th attempt. Yes, he could tell you they are not easy to win, with or without Woods.

Rahm made his professional debut five years ago and it wasn’t long before he was getting questions on when he was going to win a major.

“As if it was easy to win a major championship,” Rahm said Tuesday. He won the U.S. Open by finishing with two birdies putts from inside 20 feet that he would be hard-pressed to make again. They were tough putts.

Even at 26, Rahm has been around long enough to appreciate what it takes to win a major.

“The fact that you are expected to win one,” he said, “means nothing.”