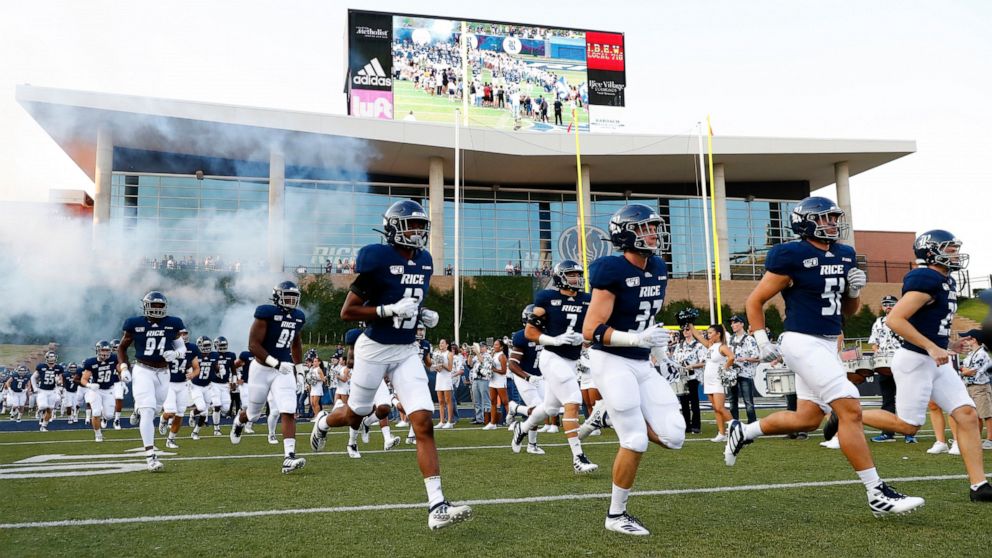 The Wild West nature of the upcoming, pandemic-challenged college football season can be illustrated in part by 160 miles of Texas highway that connects the trendy college city of Austin with the bustling metropolis of Houston.

At one end lies the University of Texas, where more than 100,000 fans will pack Darrell K Royal–Texas Memorial Stadium to cheer the Longhorns this fall. Many, along with some players and coaches, are likely to be unvaccinated after Gov. Greg Abbott’s executive order prohibiting vaccine requirements for any organization that receives state funding.

At the other of that highway is Rice University, where 40,000-plus hope to see their Owls turn things around this fall. And because it is a private research university, Abbott’s executive order does not apply, and vaccine requirements put in place by the school mean just about everybody that shows up will get in only if they have received their COVID-19 shots.

That’s just two of the 130 schools that will be playing Division I football this fall.

Each will have vaccination plans shaped by governors and legislatures, medical officials and university leaders, and they are likely to change from week to week. Politics and policy are certain to collide as red states and blue states, often with schools playing in the very same conference, attempt to make it through an entire season without an outbreak.

There are more than 2,500 schools across the country with varying COVID-19 mitigation policies, according to the College Crisis Initiative at Davidson College, which has been tracking higher education responses to the pandemic. Nearly a quarter of them — hundreds of schools such as Michigan and Notre Dame — required students arriving this fall to be vaccinated, a number is certain to increase after the FDA’s approval of the Pfizer vaccine this week.

Now, one of the biggest roadblocks to requiring the vaccine — its emergency authorization — has become a moot point.

“I think six or seven states, by gubernatorial degree or state legislative decrees, could not do it,” explained Chris Marsicano, a Davidson professor who specializes in education policy, “and Ohio, Arizona and Texas are among the most high-profile of them.”

At places where the vaccine is not required, such as Kansas State, players who have not received the shot are subject to rigorous COVID-19 control plans. They include regular testing, the wearing of masks in all public areas and, quite often, the inability to join teammates for meals and other out-of-practice activities.

“I know we’re over 80% now,” Wildcats coach Chris Klieman said midway through fall camp. “We had a handful the last week of July, the first week of August, that were able to get their first shot. So we’re not out of the woods. But nobody is. I wish we could say we’re done with this but we’re not.”

In Mississippi, where vaccination rates are among the lowest in the nation, Rebels coach Lane Kiffin raised eyebrows last month with the news that his entire team had been vaccinated. That wasn’t the case at the start of the summer program, Kiffin said, but players took it upon themselves to encourage each other to get their shots.

“You’re coming in, you’re near these guys, you’re impacting people’s ability to play the games on certain weekends and getting shut down,” he said. “This is not a normal job where you can just stay at home and zoom in on Saturday.”

Alabama coach Nick Saban said his team was closing in on 90% vaccination rates, the byproduct of a robust education effort and natural peer pressure. The same at SEC-rival Georgia, where coach Kirby Smart said “we feel really comfortable where we are” at the start of fall practice.

The NCAA doesn’t require its 1,100 member schools with some 450,000 athletes in dozens of sports to follow a one-size-fits-all COVID-19 policy. Instead, the beleaguered governing body issued a set of recommendations for testing, quarantining and isolation that were designed to fit within a framework of widely varying state mandates.

Texas and New Hampshire are among those that barred requiring the vaccine; Hawaii demands athletes be vaccinated.

It’s not just on the field, either. LSU announced that fans must show proof of vaccination or a recent COVID-19 test just to enter Tiger Stadium this fall. Oregon and Oregon State have similar policies in place.

Not surprisingly, there have been legal challenges. In one, U.S. Supreme Court Justice Amy Coney Barrett denied an emergency application to bar Indiana University from requiring faculty, staff and students be vaccinated against COVID-19 — a ruling that suggests athletes and students that challenge other vaccine requirements would likely fail.

There are exemptions, of course, but getting approval isn’t as easy as it might seem.

Duke requires students who obtain an exemption to be subject to daily symptom monitoring, regular testing, masking while indoors and other protocols. Hofstra requires students requesting medical or religious exemptions to have a document signed by a physician or religious leader that must then be reviewed by a university panel.

Often, students that decline the vaccine are forced to pay for regular testing out of their own pockets.

All of which raises serious ethical considerations, too.

“On one hand, decisions one makes about one’s health are at the core of one’s autonomy. Such decisions involve one’s deepest values and concerns,” said Shawn Klein, a professor specializing in the philosophy of sport at Arizona State. “On the other hand, the decision to get or not get the vaccine might impact others in potentially serious ways.

“I disagree with most of the reasons given for not getting the vaccine,” Klein added, “but for those making the decision, it is often important to their values.”

More than 100 games were canceled or postponed in major college football last season, even though most schools played truncated or conference-only schedules. Some were often made up with just a few days’ notice, others bounced around the schedule like a ping-pong ball. Coaches were often left wondering who they would play — not to mention when or if at all — as they dealt with the ebb and flow of outbreaks across the country.

At least that won’t be a problem this season. Every Power Five conference has indicated any team unable to play due to COVID-19 issues will be forced to forfeit their game. The SEC has even considered financial penalties for teams that have issues, pointing out that a massive amount of television money would be jeopardized by canceled games.

“Frankly, anyone not getting vaccinated is taking unnecessary and unwarranted risks,” Big 12 Commissioner Bob Bowlsby said. “It’s shortsighted to not get vaccinated.”

Indeed, the stakes couldn’t be higher.

Clemson, which has played in four of the past six national title games, estimated a university-wide loss of between $70 million and $135 million due to COVID-19 in the last fiscal year. About a third came from lost athletics revenue, and the vast majority of that came from reduced football ticket sales to ensure proper social distancing.

“It had a significant impact,” Clemson vice president of finance and facilities Tony Wagner said.

That impact extends to TV networks paying millions for the right to air games, along with sponsors, boosters and donors and a myriad other stakeholders that will demand to see returns on their investments this season.

Even players have a financial stake in staying on the field, now that they can profit from their name, image and likeness.

“The vaccine gives us hope,” new Kansas coach Lance Leipold said, “and we know there’s not going to be postponements; there’s going to be forfeitures. Do you want to be the one responsible for not playing for a championship? So we have to find ways to put ourselves in positions to play.”