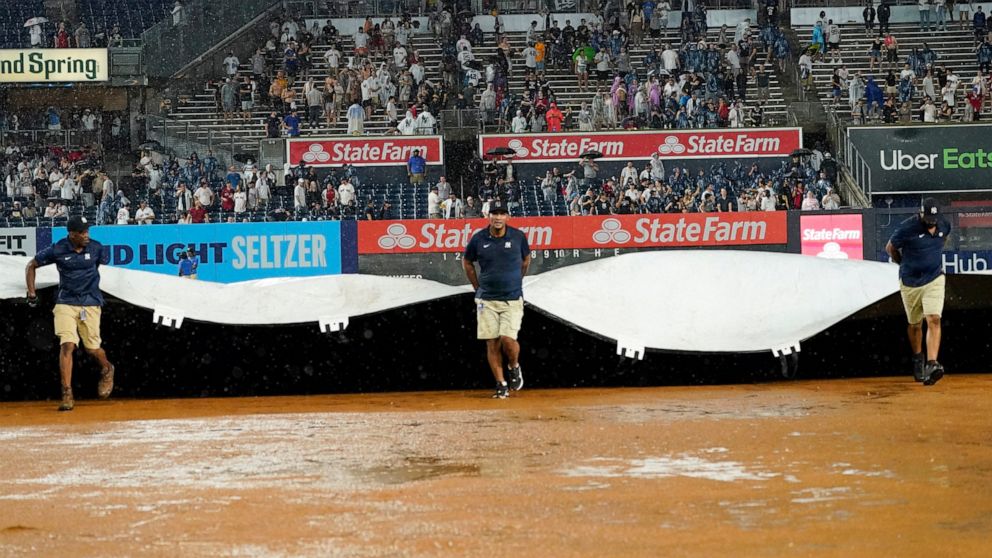 NEW YORK — After a long night and a shortened game that was interrupted several times, the New York Yankees finally have a win over Boston this season.

Gerrit Cole struck out 11 and the Yankees beat the Red Sox 3-1 in a contest called after six innings because of heavy rain Saturday.

Gary Sánchez and Gleyber Torres hit back-to-back homers in the sixth off Hirokazu Sawamura (4-1) as the Yankees topped their longtime rivals for the first time in eight meetings this year. It was their first victory over Boston in nine tries since Sept. 19.

“I thought it was a big win,” Cole said. “I thought out of the seven losses to this point, there were a few games that we were in, maybe even could have finished off with a W.”

Cole (10-4) followed up last Saturday’s 129-pitch shutout in Houston by allowing one run and five hits in a six-inning complete game. His seventh double-digit strikeout game this season came nearly three weeks after he allowed three homers to the Red Sox at Fenway Park.

“He leaned on a little bit of everything,” Boone said. “I thought his fastball got really, really strong as the outing went on.”

The game began 52 minutes late due to a weather delay even though it wasn’t raining and the tarp was not placed on the field.

“We started the game knowing that there was rain in the area,” plate umpire Jeff Nelson told a pool reporter. “There was not a 100% forecast either way of what was going to happen.”

Play also was halted before the Yankees took a 3-1 lead when a fan threw a ball at Boston left fielder Alex Verdugo and hit him in the back.

“It felt like it was targeted towards me and it don’t sit well with me,” Verdugo said.

Verdugo began yelling at fans and was restrained by first base coach Tom Goodwin. Red Sox manager Alex Cora briefly pulled his players off the field, and the game resumed after a discussion with umpires near Boston’s dugout.

“This is just a game,” Cora said. “It’s a game. It’s not life and death and it’s not this drama, and the fact that people come to the ballpark and they decided to throw a baseball (at) one of the players, I was in shock that that happened.”

Verdugo said he threw the ball into the stands to a young Red Sox fan, but a Yankees fan intercepted it and threw it back onto the field and hit Verdugo.

There also were four delays for replay reviews and another stoppage when Nelson took a 96 mph fastball from Cole off his mask in the sixth. Nelson was attended to by a Yankees trainer and stayed in the game after a few minutes.

As Nelson was getting checked, the rain significantly intensified and Cole paced the mound.

The game was delayed by rain for a second time moments after Cole took the mound for the seventh, and called following a 54-minute delay that included lightning and heavy showers.

“It got pretty bad there at the end,” Boone said. “I actually ended up walking out with Gerrit and just looked at the umpires like, what are we doing? And actually being out there, it was not good.”

Sánchez snapped a 1-all tie with his 16th homer, and the call was upheld via replay review after a fan in the right field seats appeared to reach over the wall. Torres made it 3-1 with his first homer since June 5.

DJ LeMahieu hit an RBI single for the Yankees, who were blanked in the first 13 innings of the series.

The rain began as Rougned Odor batted in the first inning and was hit by a pitch when Nathan Eovaldi appeared to struggle gripping the ball.

Eovaldi allowed one run and two hits in five innings. He struck out seven and walked one.

Eovaldi lost his no-hit bid on his 80th pitch when Greg Allen roped an elevated 98 mph fastball into the right-center gap for a double in the fifth. Allen scored when LeMahieu singled to left, but Eovaldi escaped by retiring Giancarlo Stanton for a third time.

Christian Arroyo hit an RBI single in the second for the Red Sox.

Red Sox: LHP Chris Sale threw a bullpen two days after pitching in a game for the first time since Tommy John surgery on March 30, 2020. Sale threw 39 pitches in three scoreless innings for the FCL Red Sox and will make his next rehab start Tuesday for Double-A Portland. … SS Xander Bogaerts (sore left wrist) was held out of the lineup but is expected to play Sunday night.

Yankees: RHP Luis Severino was scheduled to face hitters but it was postponed due to rain. Severino will face hitters Sunday and could start a rehab assignment shortly. He has not pitched in the majors since 2019 after having Tommy John surgery, and his return was slowed because of a groin injured sustained June 12 in a rehab appearance. … RHP Corey Kluber (right shoulder strain), who has been throwing from 120 feet, could throw a bullpen by the end of next week. … OF Clint Frazier (vertigo) will see an eye specialist Monday. … LF Tim Locastro exited after the first inning and an MRI showed a torn ACL. He injured his knee crashing into the wall in foul territory to catch a fly ball by Verdugo.