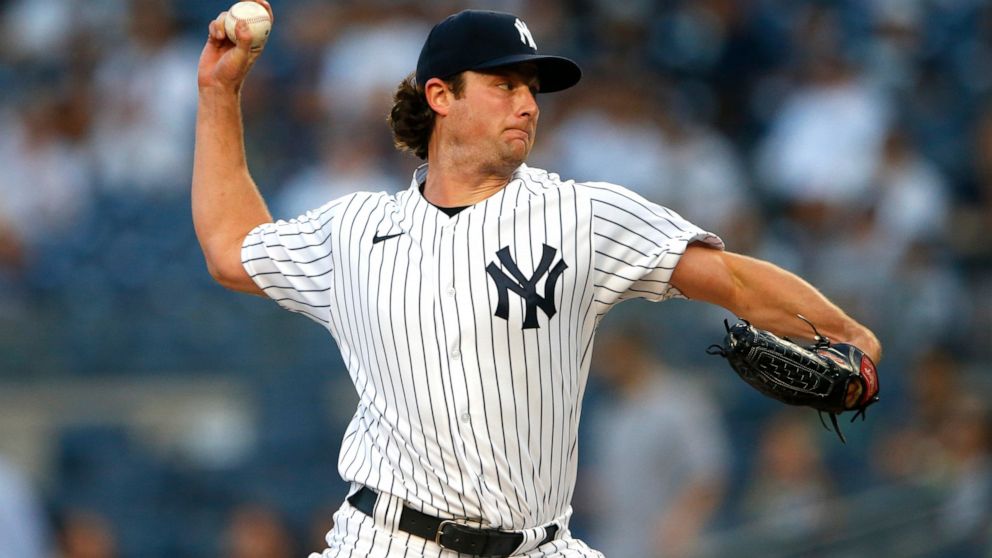 NEW YORK — Ten or so days ago, Gerrit Cole was playing catch with his wife, Amy, hoping his body would bounce back from COVID-19 quickly enough for him to help the Yankees soon.

Unsure how much he had in the tank, Cole’s first pitch Monday night to Shohei Ohtani was 99 mph. The rest were plenty good, too.

Cole pitched two-hit ball into the sixth inning and struck out nine in his return from the COVID-19 injured list, and Joey Gallo hit a two-run homer as New York beat the Los Angeles Angels 2-1.

New York has won 10 of 13 and pulled within two games of Boston for an AL wild-card spot. The Yankees open a three-game series against the rival Red Sox with a day-night doubleheader Tuesday.

Cole (11-6) went 5 2/3 innings, the only damage against him coming on Justin Upton’s homer in the first. The Yankees’ ace walked just one batter and threw 90 pitches, reaching 100 mph in his first appearance since allowing eight runs to Tampa Bay on July 29.

“I was a bit prepared for if I didn’t know where the balls were going to go,” Cole said. “The plan was just to attack the strike zone in the first and go from there.”

The right-hander tested positive for COVID-19 on Aug. 3 and had mild symptoms, but showed no ill effects Monday. He said he felt good while on the mound, though fatigue was catching up to him after the game.

“He’s an ace and he’s great at what he does,” Yankees manager Aaron Boone said. “He did a great job of managing himself.”

Gallo hit his 29th homer in the first inning against José Suarez (5-6), a drive into the second deck in right field. Gallo has four homers with New York since being acquired July 29 from Texas and has quickly become a favorite at Yankee Stadium, where fans chanted his name throughout the game.

“Here is, every day in the clubhouse, every day on the field, there’s a certain energy, where every pitch counts and you never know which run can be the winning run,” Gallo said. “It’s very exciting.”

Zack Britton, Albert Abreu and Joely Rodriguez got the ball to Chad Green, who closed out the ninth for his fourth save. The bullpen had blown at least one lead in three of New York’s past six games.

Ohtani was 0 for 4 after homering three times in three games at Yankee Stadium during the Angels’ previous visit. His outs included a towering fly ball against Cole that left the bat at 109 mph and was caught on the warning track in the sixth.

“He makes you nervous every time he’s in the box,” Cole said.

The Angels were forced into an unusual travel schedule for this makeup game from a July 1 rainout. Los Angeles beat Houston at home Sunday afternoon, landed in New York early Monday morning and planned to leave straight for Detroit on Monday night to start a three-game set Tuesday.

The July 1 rainout came a day after the low point of New York’s season, when All-Star closer Aroldis Chapman gave up a tying grand slam to Los Angeles’ Jared Walsh in the ninth inning of a stunning 11-8 Angels win. The Yankees are 25-13 since.

Suarez was effective until he walked DJ LeMahieu, Aaron Judge and Gallo in succession to start the sixth inning.

“He’s got great makeup,” Angels manager Joe Maddon said. “He doesn’t get upset, he doesn’t normally let things go too quickly on him, so kind of surprised me he went through that moment.”

Suarez was charged with two runs, four hits and three walks in five-plus innings. He struck out six and threw 82 pitches.

“He really got into a nice groove with the curveball tonight,” Maddon said. “And I’d like to see that continue with him.”

Upton’s homer was his 16th of the season but just his second since June 9, a span of 30 games for the slugger.

Angels: OF Mike Trout (calf) is traveling with the team but did not do any on-field work Monday. The Angels hope he can return this season.

Yankees: RHP Brooks Kriske was sent down to Triple-A Scranton/Wilkes-Barre. … RHP Luis Severino (right shoulder tightness) had an MRI as planned, but the team didn’t provide an update. … C Gary Sánchez (COVID-19 IL) could be activated Tuesday. C Rob Brantly and RHP Stephen Ridings were returned to Triple-A after Monday’s game, presumably to make room on the roster for Sánchez and LHP Jordan Montgomery, also on the COVID-19 IL.