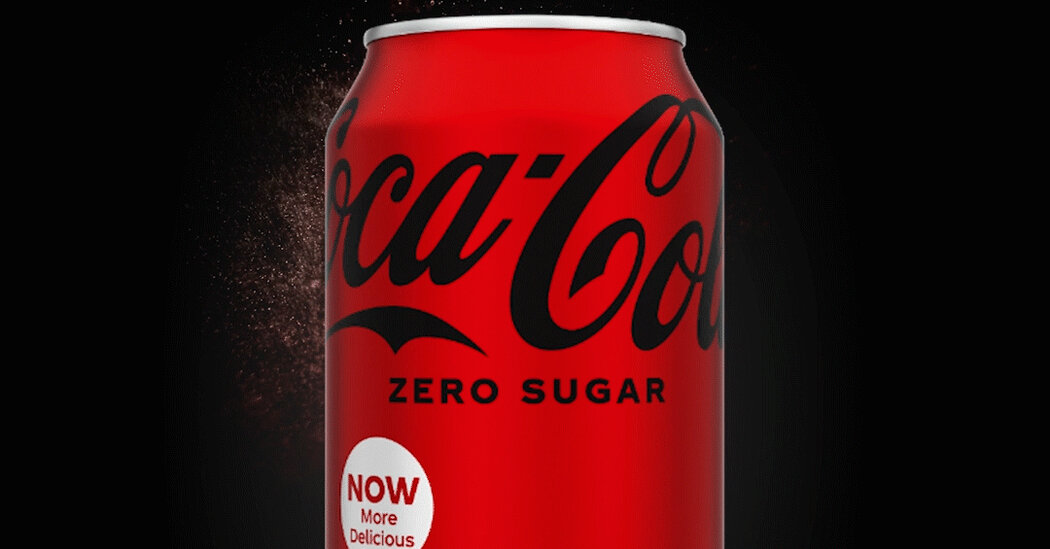 Coca-Cola changed the flavor of its soda in 1985 and enraged a nation.

Now, the company is doing it again, risking another outcry. This time, it is changing the taste and look of one of its most popular soft drinks: Coca-Cola Zero Sugar, better known as Coke Zero, the diet spinoff that is supposed to closely resemble the sugary version of “classic” Coke.

Company officials said on Tuesday that the plan was to change the drink in such a way that it would “deliver an even more iconic Coke taste.”

Anxious Americans, or at least the ones who regularly quaff Coke Zero, will be the judge.

Already, on social media, worry and apprehension greeted the impending change. Some consumers vowed to switch to other drinks, like Diet Dr Pepper, or threatened to turn to the drink of Coca-Cola’s archrival, Pepsi.

Others recalled the marketing debacle of 1985, when Coca-Cola unveiled “New Coke,” a sweeter version of the original soft drink that was rejected by many consumers.

A Detroit waitress told The New York Times that year that the soda was “flat and too sweet.” A writer in Florida called it “a taste tragedy.” A spokesman for Pepsi-Cola declared it “a tremendous opportunity for us.”

That change was an attempt to beat back the growing success of Pepsi, which was beginning to cut into Coca-Cola’s market share.

But consumers hated New Coke. In June 1985, the company was getting 1,500 calls a day on its consumer hotline.

“People seemed to hold any Coca-Cola employee — from security officers at our headquarters building to their neighbors who worked for Coke — personally responsible for the change,” according to a detailed account of the fiasco on the company’s website, which describes the episode as one of the “most memorable marketing blunders ever.”

The flavor change so angered people that an episode of the sitcom “The Golden Girls” referred to the fury in a joke, consumers stockpiled cans of the original, and at least one lawsuit tried to make Coca-Cola return to its original formula. (A federal judge rejected the suit, mentioning that he preferred Pepsi.)

In July 1985, after only three months, the company announced that it would restore the original Coca-Cola, now rebranded as “Coca-Cola Classic,” to store shelves. “If that is what the consumer wants, that is what we will give him,” Charles Millard, chairman of the Coca-Cola Bottling Company of New York, said after the about-face.

This time around, the change is not likely to cause the same sort of backlash, despite some of the early grumbling, said Doug Bowman, professor of marketing at Emory University’s Goizueta Business School.

“This is a strategy where Coke is trying to stay ahead of the market,” he said.

In general, consumers have grown used to beverage companies changing and adapting popular drinks. Professor Bowman noted that in the nearly 40 years since the New Coke kerfuffle, vodka companies have introduced vanilla, lime and peach flavors; popular beer brands have experimented with myriad tastes; and both Coke and Pepsi have dabbled in fruit varieties.

Coca-Cola even made a limited supply of “New Coke” available in 2019 as part of a promotion related to “Stranger Things,” the supernatural thriller set in the 1980s.

The advertised changes in the new Coke Zero are subtle by comparison, he said.

“It is hard to see anyone except the most die-hard Coke Zero Sugar people noticing the difference,” said Professor Bowman, who from 2002 to 2004 taught courses at Emory to Coca-Cola employees through a program paid for by the company.

Natalia Suarez, a senior brand manager at Coca-Cola, said in a statement that the company had tinkered with the soda recipe because, to keep growing, “we must keep challenging ourselves to innovate and differentiate just as other iconic brands have done.”

“The consumer landscape is always changing,” she added, “which means we must evolve to stay ahead.”

Coca-Cola Zero Sugar, which the company released in 2005, has had its flavor changed before. In 2017, the company said the product was “reformulated” so that it would taste more like standard Coca-Cola.

Though the company did not say what that process would look like, it promised on social media that it would not change the ingredients, which include carbonated water, caramel color, phosphoric acid, aspartame, caffeine and potassium benzoate.