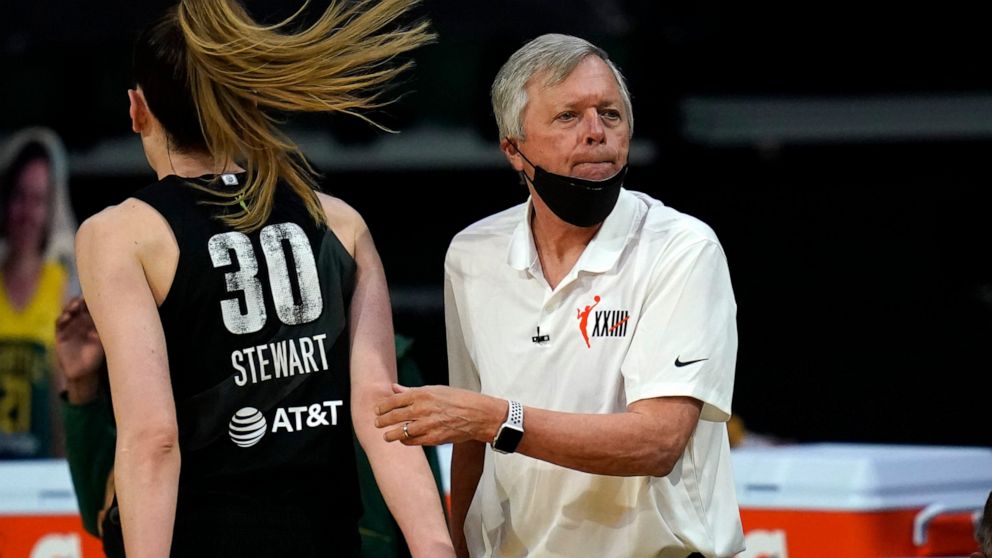 U.S. assistant Dan Hughes is not the face of the Olympic women’s basketball team and he couldn’t be happier in his role

SAITAMA, Japan — U.S. assistant Dan Hughes is not the face of the Olympic women’s basketball team and he couldn’t be happier in his supporting role.

The 66-year-old has had more than his share of success but believes his biggest reward is having played a role in the careers of so many coaches, including the American staff. National team head coach Dawn Staley played for Hughes in the WNBA.

“Look around at the staff I’m with,” said Hughes. “Dawn was my first point guard when I was an interim coach in Charlotte. Jen (Rizzotti) played for me in Cleveland, Cheryl (Reeve) was my assistant in Cleveland. I’ve had a role as a mentor in some cases, a teacher in others. This Olympics just ties it together in a way that makes a lot of sense.”

Hughes was a member of the U.S. Olympic selection committee for years before being named an assistant for the Tokyo Games.

It’s not just this Olympic staff where Hughes has made his impact after spending 20 years coaching in the WNBA before abruptly retiring at the end of May. Five of the current coaches in the league were former assistants of his — four of whom are female — including his replacement in Seattle Noelle Quinn.

“The championships, I’m glad I got them, don’t get me wrong,’ he said. “If I had to choose a legacy, that’s the one I’d choose. I’m proud that former players in our league are part of that pool of players that have done this. There are others that have been in and out of the league. As you get older, and look over a career, those relationships are special.”

With the league in its 25th season and more former players getting into coaching, Hughes believes its a great trend for the league.

“I understand the evolution and I’m glad I’m part of it,” said Hughes, a two-time WNBA coach of the year. “There should be an opportunity for former players in this league. Sandy Brondello came to me right after playing. Vickie (Johnson) did and Noe as well.

“I enjoyed being a part of their progression to be a head coach. I’ve enjoyed it. It was something that was important to me just as much as winning basketball games.”

Hughes, who also stepped away from coaching in 2016, said he’s done being a head coach in the WNBA after stops in Charlotte, Cleveland, San Antonio and Seattle. He has coached the second-most games in league history (598) and is tied for fourth in victories with 286.

“Dan has been just a huge player in the game of women’s basketball. He’s been somebody that has obviously coached and with that, you’re going to develop players, you’re going to help players develop themselves and figure out what they’re going to do post-playing,” said U.S. point guard Sue Bird, who helped Hughes win titles in 2018 and 2020. “I know that’s something he takes a lot of pride in, just empowering us, allowing us to find ourselves and figure things out like I said post playing.”

Hughes said he has always had strong women in his life, starting with his mother. He’s excited to share his first Olympic experience with her — albeit from afar. Hughes, who talks with her every day on the phone, said she is in hospice and can’t see very well. But she will listen to the games to keep tabs on how her son and the team are doing.

“This is an escape for her mind. Half of the conversation is about the basketball team I’m associated with,” Hughes said. “If I take the conversation another way she brings it back. … This last run, she wants to hear about it.”

Hughes said his mother would like him to be more like former U.S. coach Geno Auriemma. Not because she wants to emulate his coaching style, but because of his fashion sense.

“She thought he dressed well and had the brightest white shirts and always wanted me to dress more like Geno,” Hughes explained laughing. “She thought he was really sharply dressed.”

Hughes might get a pass on his attire if he can help the U.S. win its seventh consecutive gold medal.