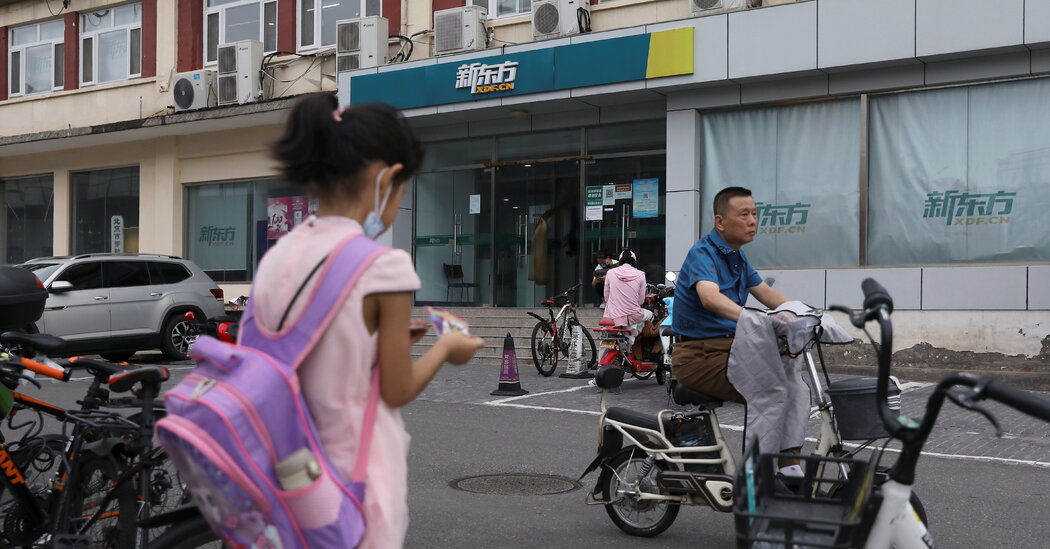 Chinese regulators on Monday banned tutoring companies from making profits, a move that sent their shares plummeting, erasing tens of billions of dollars from the value of the country’s once blistering education sector, as Beijing turns its focus to the growing financial burden that students — and their parents — face.

Some of China’s biggest publicly listed education companies lost significant chunks of their value as investors ditched them following the announcement of rules that require all companies that offer curriculum tutoring to register as nonprofit institutions.

The rules will also restrict new foreign investment, once a key avenue for those companies to raise money. They are the latest in a series of moves by China to rein in its technology sector that has hit stocks of its biggest companies, in sectors as diverse as ride hailing and music licensing. Regulators say that they are tackling privacy, cybersecurity and antitrust concerns, directing their crackdown at the country’s thriving internet industry.

Koolearn Technology, which provides online classes and test-preparation courses, said that it expected the rules to “have material adverse impact” on its business. Its stock lost 33 percent on Monday. A handful of other Hong Kong-listed education companies, including New Oriental Education & Technology and Scholar Education Group, along with the U.S.-listed companies Gaotu Techedu and TAL, issued similar statements. TAL lost 71 percent of its value on Friday, while Gaotu lost 63 percent.

For years, China’s private education sector was one of the most enticing for global investors, who threw billions of dollars at publicly listed companies that promised to capitalize on the hundreds of thousands of families striving for better opportunities through education. By Monday evening in Asia, much of that money had vanished.

Many middle-class families in China pay for after-school tutoring to help their children gain an edge in national tests that determine their futures. Last week, the country’s top administrative body published an opinion that took aim at the sector and outlined its plans to “reduce the burden of students’ homework and off-campus training.”

Analysts swiftly recalibrated their assessment of the prospects for the industry, which was once valued at more than $100 billion by Wall Street banks like Goldman Sachs. On Monday, the bank’s analysts estimated it would be worth $24 billion in the coming years.

Separately, regulators over the weekend ordered Tencent, the Chinese tech conglomerate, to end all exclusive music licensing deals with record labels and fined it around $78,000 for what it said were unfair practices. Shares in Tencent Music, which trades in the United States, were down more than 13 percent in premarket trading on Monday.

Credit Suisse has settled with a former high-ranking executive who had accused the Swiss bank of spying on him, claims that eventually led to the ouster of the firm’s chief executive.

What began in 2019 with a public argument between Iqbal Khan, a wealth-management banker who had recently defected to UBS, and a corporate spy exploded into a rapidly escalating scandal. Credit Suisse’s then-chief operating officer, Pierre-Olivier Bouée, resigned after he was accused of ordering the surveillance of former colleagues.

The scandal culminated in early 2020 with the resignation of the bank’s chief executive, Tidjane Thiam, who had pledged to overhaul the controversy-prone Swiss bank. Mr. Thiam denied knowledge of the espionage operation.

“All involved parties have agreed to settle,” Ms. Meier said. “This matter is now closed.”

An investigation into the matter by the Swiss financial regulator, known as Finma, is continuing, a spokesman for the agency said.

The settlement was first reported by NZZ am Sontag, a Swiss news outlet.

The slew of controversies has clouded the future of Credit Suisse, which has suffered a number of further defections within its investment bank in recent months.

Tesla earnings: How has the electric carmaker fared, with a hot car market but also a global shortage of computer chips that has hampered auto production?

Economic outlook: The International Monetary Fund is set to publish its global growth forecast for the year in its World Economic Outlook report. The fund’s managing director, Kristalina Georgieva, has said the global growth estimate for 2021 will be about 6 percent, which was the forecast in April.

Boeing earnings: The aircraft maker has had to slow production of its 787 Dreamliner model amid quality concerns and lost a record amount of money in 2020. Can the airline recovery help it return to profitability?

Starbucks earnings: The chain has been hit by shortages of several ingredients, including juices and breakfast foods, and even supplies like cups, lids and straws.

The Fed meets: The Federal Open Market Committee will decide, after talks on Tuesday and Wednesday, whether to raise interest rates. The chair of the Federal Reserve, Jerome H. Powell, has acknowledged that inflation has increased “notably.”

U.S. economy: The gross domestic product for the second quarter is expected to show a strong gain. Some analysts expect double-digit growth, but the Federal Reserve Bank of Atlanta, which has been lowering its forecast over the past month, expects 7.6 percent.

Robinhood I.P.O.: The stock trading app is set to begin trading on Nasdaq by the end of the week. Robinhood’s unusual plan is set to sell up to a third of its shares directly to its customers through its app, but that could cause volatility.

Eviction ban: The Centers for Disease Control and Prevention’s nationwide ban on evictions will expire. Many renters are behind on payments, and the time to apply for emergency rental assistance is running out. Additionally, the rollout of federal aid for landlords and tenants has been slow.

Even as 609,000 Americans have died from the coronavirus and the Delta variant surges, as restaurants and other businesses shut down and as millions of workers found themselves unemployed, the tech industry flourished in the pandemic.

The combined stock market valuation of Apple, Alphabet, Nvidia, Tesla, Microsoft, Amazon and Facebook increased by about 70 percent to more than $10 trillion. That is roughly the size of the entire U.S. stock market in 2002. Apple alone has enough cash in its coffers to give $600 to every person in the United States. And in the next week, the big tech companies are expected to report earnings that will eclipse all previous windfalls.

Silicon Valley, the world headquarters for tech start-ups, has never seen so much loot, reports The New York Times’s David Streitfeld. More Valley companies went public in 2020 than in 2019, and they raised twice as much money when they did. Forbes calculates there are now 365 billionaires whose fortunes derive from tech, up from 241 before the virus.

Tech is triumphant in a way that even its most evangelical leaders couldn’t have predicted. No single industry has ever had such power over American life, dominating how we communicate, shop, learn about the world and seek distraction and joy.

“Call it half luck — being in the right place at the right time — and half strategic tactics by companies recognizing this was going to be a once in a lifetime opportunity,” said Dan Ives, a managing director at Wedbush Securities. “What for most industries were hurricane-like headwinds was a pot of gold for tech.”

But any measures restricting tech will need public sentiment behind them to succeed. Even some of tech’s biggest supporters see the potential for worry here.

“We went from being pirates to being the Navy,” Marc Andreessen, a central figure in Silicon Valley for a quarter-century, told the Substack writer Noah Smith in a recent interview. “People may love pirates when they’re young and small and scrappy, but nobody likes a Navy that acts like a pirate. And today’s technology industry can come across a lot like a Navy that acts like a pirate.”

The Federal Trade Commission on Friday asked a federal judge to give it more time to refile an antitrust suit against Facebook that is the agency’s biggest test in reining in the power of big tech.

In a filing with the U.S. District Court for the District of Columbia, the agency asked for a three-week extension, or until Aug. 19, to amend a lawsuit that the court dismissed last month. The F.T.C. said in its request that it had reached an agreement with Facebook over the proposed extension.

Last month, Judge James E. Boasberg of the federal court knocked down a core argument made by the F.T.C., saying prosecutors had failed to provide enough persuasive facts to back up the claim — that Facebook holds a monopoly over social networking. But the judge gave the F.T.C. a 30-day window to refile its lawsuit.

The new lawsuit will be the first major action by Lina Khan, the new chair of the F.T.C. and a critic of Facebook, Google and Amazon who has advocated for the breakup of the digital platforms.