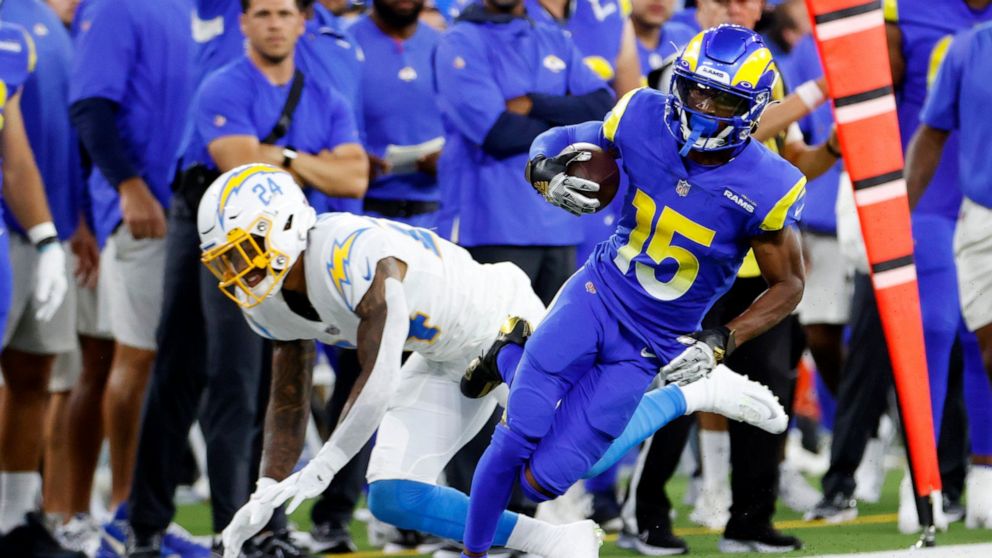 INGLEWOOD, Calif. — Darius Bradwell rushed for a touchdown in the third quarter and the Los Angeles Chargers beat the Los Angeles Rams 13-6 Saturday night in the first NFL game with fans at SoFi Stadium.

Rams owner Stan Kroenke’s palatial football arena welcomed his team and its co-tenants for a well-attended preseason opener with 68,791 tickets distributed. Although neither team played any of its stars, the crowd still filled up the terraces, concourses and party areas for the first time throughout SoFi, which will host the Super Bowl in one day less than six months.

The Chargers shut out the Rams in the second half to win the head coaching debut of Brandon Staley, who took charge less than five years after he was the defensive coordinator at Division III John Carroll. The 38-year-old Staley spent last season with the Rams, where he led the league’s No. 1 defense in his only year as an NFL coordinator.

Chase Daniel went 15 of 24 for 104 yards in the first half for the Chargers. Easton Stick quarterbacked the Bolts’ only touchdown drive, finding Jason Moore Jr. for an 18-yard gain before Bradwell’s scoring run.

Perkins, a second-year pro from Virginia who didn’t get a snap as a rookie last season, led the Rams’ only touchdown drive in the first half, going 5 of 6 with a scoring throw to Trishton Jackson.

Perkins also made the individual play of the night in the fourth quarter when he scrambled from the pocket, stiff-armed Damon Lloyd and hurdled Kemon Hall to pick up a first down on third and 9.

Larry Rountree III rushed for 63 yards for the Chargers, and Joshua Palmer had six receptions.

“I know that we’re not the home team, but I feel like being here in the stadium and being around the guys for the first time in a game setting was amazing,” Slater said.

The Rams, who didn’t have a first-round pick for the fifth consecutive year, also played their draft choices. Their highest pick, second-round receiver Tutu Atwell, flashed his speed as a receiver and a kick returner, while linebacker Ernest Jones was the defensive signal-caller when on the field.

SoFi Stadium opened last year amid the coronavirus pandemic, but fans hadn’t been allowed inside before several events this year culminating in this prelude to the NFL season. Traffic and parking were a mess in the areas around the stadium as fans and authorities figure out what works, but there were few obvious issues inside the stadium, which has ample amenities to handle even larger crowds. The Rams and Chargers host back-to-back preseason games next weekend.

The Chargers’ opening drive was 21 plays long, making it the franchise’s longest in a preseason game during the 21st century. It ended in a short field goal by Tristan Vizcaino, however.

Rams kicker Matt Gay missed an extra point after a penalty. Austin MacGinnis then missed a 40-yard field goal attempt off the left upright. Gay is widely expected to hang onto his job after stabilizing the position last season.