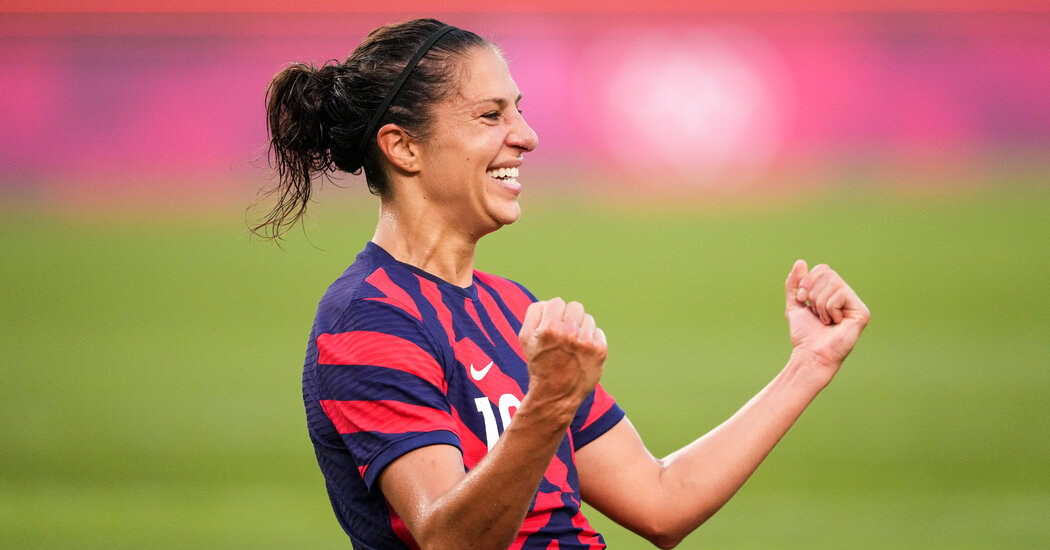 Carli Lloyd, a former world player of the year who was one of the United States women’s national team’s career leaders in goals, games and honors, announced her retirement from soccer at age 39 on Monday.

Lloyd will finish the season with her National Women’s Soccer League team, Gotham F.C., and play in four exhibition games for the U.S. team in September and October before calling it a career.

Lloyd scored 128 goals for the U.S. team, ranking her fourth behind Abby Wambach, Mia Hamm and Kristine Lilly, all retired. Her 312 international appearances rank her second behind Lilly.

She had two goals in the bronze medal game at the Olympics earlier this month, her ninth and 10th Olympics goals, the most by an American player. She also played for five different N.W.S.L. franchises.

“Through all the goals, the trophies, the medals and the championships won, what I am most proud of is that I’ve been able to stay unapologetically me,” Lloyd said in a statement.

Lloyd grew up in South Jersey and played at Rutgers. She made her national team debut at 23 and was seldom out of the team since.

Other members of the women’s soccer team are weighing retirement. Midfielder Megan Rapinoe and defender Becky Sauerbrunn, who are both 36 and like Lloyd longtime fixtures of the United States team, both said in Japan that they would consider their soccer futures after the Games.

Unlike some national teams in other sports, the women’s team operates in multiyear cycles rather than on a year-to-year basis, meaning players like Lloyd, Rapinoe and Sauerbrunn — and any others considering stepping away for any reason — faced the decision of most likely committing to the team through the 2023 Women’s World Cup and the 2024 Paris Olympics.

For a few, that might be a bit too far. Rapinoe said she would discuss retirement with her partner, the basketball star Sue Bird, who is considering stepping away from her sport after winning her fifth gold medal at age 40. Sauerbrunn said she would go home and talk to the people closest to her before making a call about continuing her career, “to see if I still have it.”

Lloyd, though, had done little to hide the fact that she was leaning toward walking away. One of the most driven and dedicated players in the team’s history, she talked freely — and with rare candor — about what might come next.

After the Americans lost to Canada in the semifinals, she lingered on the field long after her teammates, seemingly unwilling to leave, and she spent the drive to the stadium for the bronze medal game staring out the window, she said, and reminiscing about the long arc of her career.

“Obviously I’m at the tail end of my career,” she said after the United States won the bronze. “Physically I feel really good, but at some point you have to hang up the boots and live life. And I know my husband is eagerly waiting for me to switch off because it’s been 17 years of just grinding away.”

She declined, then, to be more specific. She was more eager, she admitted, than she had ever been to get home from a tournament, to step back and clear her head. “First I’m going to take two or three days and sit by my pool and not move,” she said of her retirement decision. “Maybe four.”

In the end, she needed only a little more than a week to make it official.

“It’s always been in the back of mind at some point,” Lloyd said in her final public comments in Japan. “But I’ve always wanted to be the one to dictate that.”