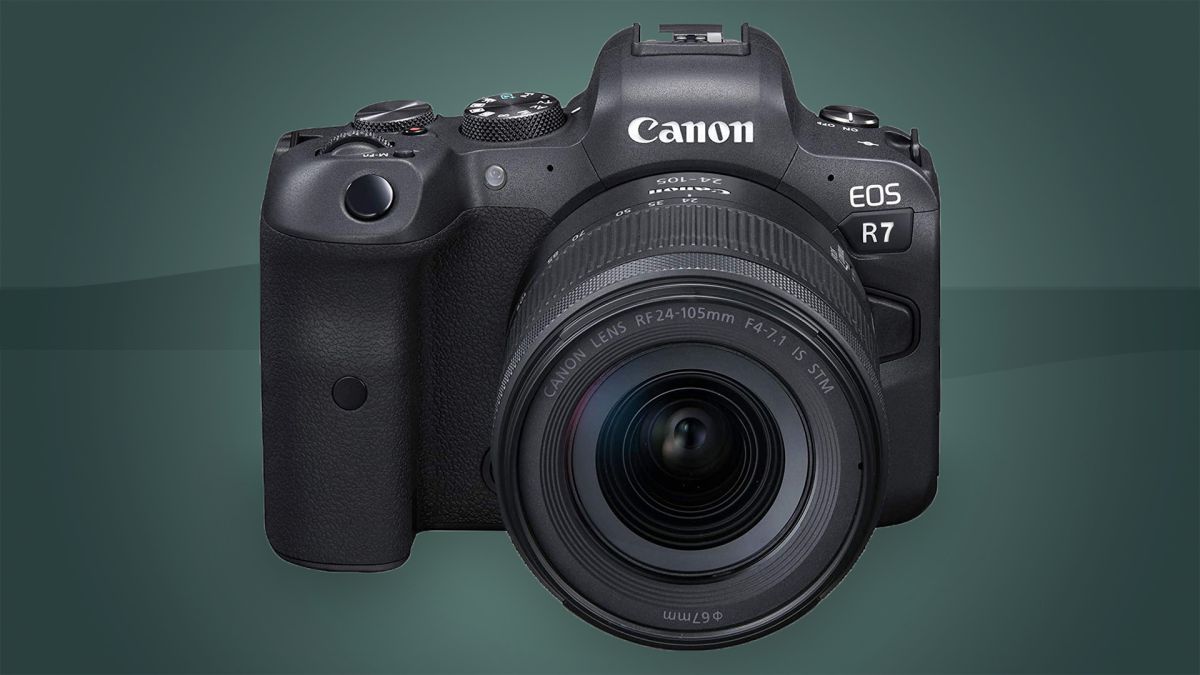 The Canon EOS R7 is expected to be an important camera. It’s rumored to be the first, or among the first, of a new wave of RF-mount mirrorless cameras with APS-C sensors. If the speculation is correct, this could make it an affordable, but powerful, way to get into Canon’s mirrorless camera system, with skills that are primed for wildlife, sports and video shooting.

A word of warning: it’s still very early days for Canon EOS R7 rumors. So far, there haven’t been any major leaks, and it appears that the knock-on effects of the pandemic on supply chains and chip shortages has potentially pushed Canon’s 2021 launch schedule back a little. But rumors of Canon’s first APS-C camera have persisted, and reliable sources suggest it’s at least in the pipeline.

So what can expect from the rumored EOS R7? Right now, all of Canon’s EOS R cameras – including the Canon EOS R5 and Canon EOS R6 – have full-frame sensors. But like the Canon EOS 7D Mark II DSLR, is expected to combine pro features with an APS-C sensor. This means it’d be able to use the same lenses as full-frame models, without a mount adapter. And it’d almost certainly spell the end for Canon’s EOS M series, at least in the form we currently know it.

The EOS R7 means Canon’s ongoing mirrorless camera line-up might ultimately be arranged a more like Sony’s. Full-frame and APS-C mirrorless cameras would share the same mount, but there may be separate lens series designed for APS-C and full-frame models.

We would not be surprised to see existing M-mount lenses altered to suit this change, and a (hopefully low-cost and low profile) adapter to let EOS M camera owners upgrade without too many headaches. But what about the camera itself? Here’s what we know so far, based on the latest leaks and rumors.

In December 2020, there were rumors that Canon EOS R7 prototypes were being tested in the wild by photographers. The speculation from apparently reliable Canon Rumors sources hinted that the camera looked “nearly identical to the Canon EOS R6.”

Since then, though, expectations have been tempered a little by suggestions that the pandemic-related manufacturing challenges and ongoing semiconductor shortages have now pushed Canon’s 2021 plans back a little.

In January 2021, another solid Canon Rumors source hinted that Canon’s most exciting release of the year might end up being the Canon EOS R1 (or perhaps, given subsequent news, the Canon EOS R3). As the latter is now only expected to be given a full launch in September, that wouldn’t leave a huge amount of room for another big launch in 2021. So a 2022 launch for the Canon EOS R7 seems the most likely.

We don’t have any pricing details yet, but the camera may be aimed at the sort of crowd that would once have bought a Canon EOS 7D Mark II. That camera cost $1,799/ £1,599 at release in 2014, though that was so long ago we should not assume the Canon EOS R7 will arrive at a similar cost.

A more recent rumor in June suggested that the Canon EOS R7 could be part of a trio of new mirrorless Canon APS-C cameras, sitting above the Canon EOS R8 and entry-level EOS R9. If true, we this may push the Canon EOS R7 towards the higher-end, $2,000-mark, in order to leave room for the EOS R9, but this is pure speculation at this stage.

While Canon is yet to announce any of the Canon EOS R7’s features officially, we do have a few credible leaks that tell us a few of the most important characteristics.

This new camera will likely come with several notable improvements that’ll see it rise a league or so above the EOS M6 Mark II, mind. The one that’s most in the balance is five-axis image stabilization (IBIS). Over in Sony land, you only get this in the top-end Alpha A6600, but the rumors so far are mixed on whether or not it’ll be included on the EOS R7.

If IBIS did make the cut, it’d likely to increase the EOS R7’s weight (and cost) compared to the lower-end EOS R8 and R9, making it a similar size and shape to the Canon EOS R6. That said, the EOS R8 it rumored to be a “vlogger” camera, so that too would certainly benefit from IBIS.

The Canon EOS R7 is also expected to be able to capture 10-bit color video internally, to match the excellent Fujifilm X-T4. Canon has real work to do here, as the Canon EOS M6 II is not in the same league as its Sony or Fuji rivals for 4K video detail.

We also hope to see Canon leapfrog over Sony’s IBIS for effectiveness in video, and the use of two-system stabilization — digital plus IBIS — would be a good idea.

However, these leaks also suggest the Fujifilm X-T4 may retain a lead for slo-mo, as it can shoot 1080p at up to 240fps, where the EOS R7 is expected to stick to 120fps. Canon may be relying on its higher-resolution sensor appealing to stills shooters who want extra detail. And it no doubt will.

We don’t yet know how much this reasonably high resolution will affect burst shooting speeds. But, as ever, we can look for clues in previous cameras.

The Canon EOS M6 Mark II has the same resolution but manages a fairly impressive 14fps with autofocus, or 30fps using a cropped 17.9MP Raw Burst mode. This is a little slower than the 20fps of the lower-res Fujifilm X-T4 (which can also shoot crops at 30fps).

We do have a reason to expect an improvement. The EOS R7 is reported to use a version of the Digic X processor, which would be an upgrade from the DIGIC 8 of the Canon EOS M6 Mark II. This is not a two-generation gap, suggested by those figures, just a single generational leap. The number nine is considered unlucky in Japan, and it’s not unusual for Japanese companies like Canon to gracefully skip over ‘9’ generation names.

This means burst shooting it likely to sit somewhere between 14fps and 20fps, and a higher-speed crop mode will probably feature.

The Canon EOS R7 will be “directly aimed at sports, wildlife and videography” according to a source cited by Canon Rumors, and so far it seems to fit the bill. A new processor should also help the speed of subject-detection autofocus, whether the focus ‘subject’ is an eye, a face or an animal. The actual focus system will depend on the sensor, and we don’t yet know if we’ll see a major upgrade from the 143 phase detect points of the EOS M6 Mark II.

Canon EOS R7: what we want to see

Aside from variations in IBIS across the new rumored three-model range — EOS R7, EOS R8 and EOS R9 —  we don’t really know what else will separate the models. They are likely to share the same sensor, leaving aspects like rear screen style and resolution, control layout and EVF quality to supply the rest.

We hope to see a 3.69-million dot EVF, minimum, on the Canon EOS R7. We also think that to expect the step-up resolution, 5.76 million dots, is probably unrealistic.

If this is to be a reasonably serious videographer’s camera we’d like to see a fully articulated screen.  And the step-down Canon EOS R8 could use a 180-degree flip-up screen instead, although this would have knock-on effects on the contours of the camera’s top. A flip-up screen isn’t much use if there’s a big EVF mound up there.

Canon’s approach to EOS R7 lenses is one of the most important factors here, though. The camera will be able to use lenses made for Canon’s full-frame mirrorless cameras, but will there be dedicated lighter lenses designed for these smaller APS-C cameras?

There should be. While you won’t get the cropping and vignetting you’d see when using an APS-C lens on a full-frame camera, because you’re using all of the sensor but part of the lens, dedicated EOS R7 lenses could use smaller lens elements. And this means they could be smaller, lighter, and often cheaper, as a result.

If Canon does indeed go down this route, let’s hope these lenses have quiet focusing, as it could be one way for Canon to appeal to videographers and YouTubers over Fujifilm’s system.

This isn’t something that Canon necessarily needs to tackle at full speed, though. You can already get hold of the reasonably-priced RF 50mm f1.8 and RF 24-105mm, and the whole appeal of the APS-C Canon EOS R7 is likely to be avoiding spending full frame-style money on your camera equipment.

The Canon EOS R7 should, in theory, mark a sort of rebirth for Canon’s APS-C cameras. It’s a chance for the company to leap ahead of Fujifilm and Sony, potentially for both stills and video shooters.

However, it’s still very much a rumor at this stage and one that’s been slightly clouded by recent speculation that Canon is developing its cheapest-ever full-frame camera. If those credible rumors are true, and a $799 full-frame successor to the Canon EOS RP does arrive in 2022, then it would slightly weaken the case for APS-C models for the Canon RF-mount.

That said, the Canon 7D Mark II was always more of a specialist camera than an all-rounder like the EOS RP, and it’s likely that an EOS R7 would follow in that spirit, offering a compelling blend of speed, build quality and features that a $799 full-frame is unlikely to match.

With a 2021 launch for the EOS R7 looking increasingly unlikely, it’s certainly not a reason to put off buying something like the Fujifilm X-T4 today. But we will, as ever, keep an eye out for further Canon EOS R7 rumors and reports, so look out for updates to this page for the latest news.