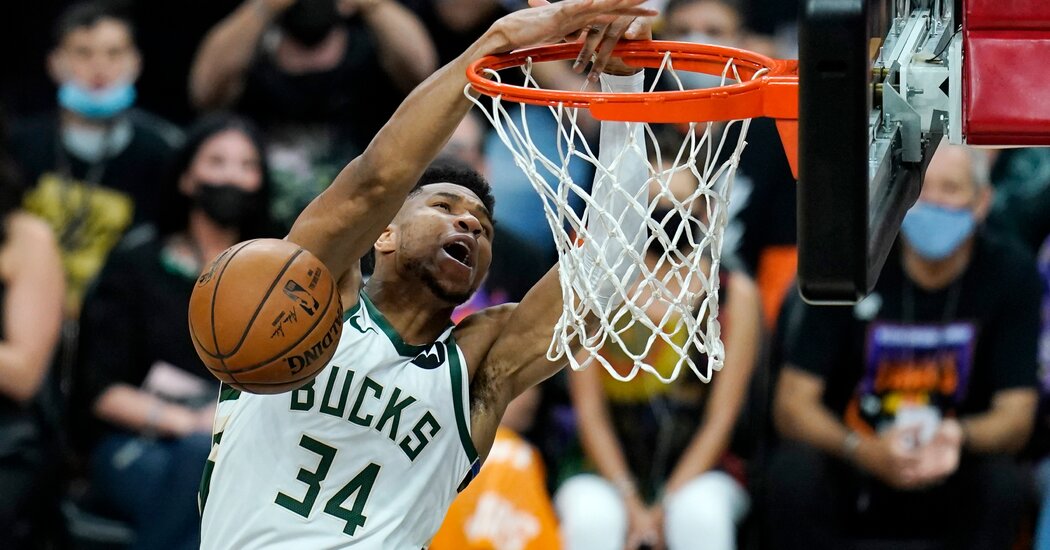 PHOENIX — Giannis Antetokounmpo writhed on the court, eyes clenched, dreams ostensibly dashed in Game 4 of the Eastern Conference finals against the Atlanta Hawks.

He had landed awkwardly while defending a pass, his knee expanding and curving like a rubber band. The pain continued into the next day when he could not walk with his swollen knee doubled in size. In those immediate tense moments, he figured he was facing surgery and sidelined for a year.

Instead, just a week after being unable to walk, Antetokounmpo performed for the Milwaukee Bucks in Tuesday’s loss to the Phoenix Suns, 118-105, in Game 1 of the N.B.A. finals. The Bucks opened their offensive possessions with an alley-oop attempt to Antetokounmpo rolling to the rim.

The lead-up to the finals had revolved around the availability of Antetokounmpo, one of the league’s brightest stars and a two-​time Most Valuable Player Award winner. It was fitting in a postseason defined and derailed by some of the game’s marquee stars having been felled by injuries — Anthony Davis, Kyrie Irving and Kawhi Leonard among them.

Without Antetokounmpo, the Bucks had beaten Atlanta, who played without a healthy Trae Young, but Antetokounmpo’s absence in the finals would have seriously hindered Milwaukee’s first championship bid in 50 years.

Bucks Coach Mike Budenholzer mostly deflected news media questions about Antetokounmpo’s status, while Antetokounmpo himself did not field any before Game 1. Wearing a large, protective sleeve on his leg, he tested himself a couple hours before the opener, deemed himself able to play and received clearance from the team’s medical staff.

Count the Suns as unsurprised.

“This is the time of the year where you sacrifice everything, and that’s what we expected,” Suns Coach Monty Williams said, adding: “So, it wasn’t like we were going to be caught off guard, but we were planning for their best and Giannis is their best.”

Last season’s finals between the Los Angeles Lakers and Miami Heat played out in the isolation of a restricted-access quarantine zone at Walt Disney World. On Tuesday, the N.B.A. opened its finals in front of 16,557 fans, most ready to eagerly cheer the Phoenix Suns on to their first N.B.A. championship.

They watched a sampler of Antetokounmpo’s 2021 playoff journey.

He scored his first basket off a short turnaround jumper over Deandre Ayton. He blew past Jae Crowder and Ayton for dunks and chased down Mikal Bridges for a LeBron James-esque block.

He circled home a 3-pointer while on an island and endured deafening 10-second counts from the crowd during each of his 12 free-throw shots for his extended routine.

“From my treatment to lifting and getting on the court, pool sessions, keeping my foot elevated, like 24 hours a day,” Antetokounmpo said of the rehabilitation required for him to play. “And obviously it wasn’t easy, but I was willing to do it, and the medical staff had a great program for me that I was able to do what I had to do to stay in shape and at the same time recover and not have a lot of swelling in my knee.”

He scored 20 points and grabbed 17 rebounds. Antetokounmpo said he experienced no pain, but at times appeared to lack his usual burst that distinguishes him in the open court.

“And talking to him, he did say it hurt, it hurt a lot,” said his teammate, Khris Middleton. “But he still found a way to get over it, play through a little bit of pain and fight for it. It’s great. That’s all you want from your teammate is to give it his all. I don’t think he’s fully 100 percent but he’s close to it to go out and play and give it his all.”

Antetokounmpo, at his best, may not have made the difference in Tuesday’s outcome.

Chris Paul, playing in the first N.B.A. finals of his long and memorable career, finished with 32 points and nine assists. He assumed control of the game from the second quarter on, probing the court to find his favorite midrange shots or setting up others in exploiting Milwaukee’s frequent defensive switches.

The genius of Paul, a point guard who possesses a counter to every defensive counter, presents Milwaukee with a dilemma entering Game 2.

Throughout the postseason, Bucks center Brook Lopez served as a viable offensive source for Milwaukee. In Antetokounmpo’s absence, Lopez had erupted for 33 points in Game 5 of the Eastern Conference finals.

Lopez, a veteran in his 13th season, deserves credit for remodeling his traditional post game and becoming a marksman from the perimeter. He lacks the nimbleness necessitated to dance on defense with crafty guards like Paul and Devin Booker. They targeted him on switches, relegating Lopez to the bench for most of Game 1’s second half, while Antetokounmpo played center.

The Bucks missed Lopez’s offensive output on a night when Middleton scored 29 points on 26 shots, but did not attempt a free throw and Jrue Holliday missed 10 of his 14 shot attempts. The Bucks will need to find a way to protect Lopez on defense and ensure that he gives more than he allows.

“We learned a lot of stuff,” Lopez said. “We have a lot we can look at now and review and go forward after that.”

Ayton continued shining as he has throughout the postseason. He is a center agile enough to switch onto smaller guards. On offense, Ayton hunted for picks to set and roll partners to pair with while amassing 22 points and 19 rebounds.

The finals began how much of the playoffs have unraveled for these two teams. Phoenix has claimed every opener. Milwaukee has dropped the first game of every postseason matchup with the exception of its first-round series against Miami.

The Suns faced injury issues to one of their star players earlier in the playoffs when Paul injured his shoulder against the Lakers in the opening round.

Before Game 1, N.B.A. Commissioner Adam Silver addressed the league’s rash of injuries. Silver said the quick turnaround between seasons, among other factors, had undoubtedly played a role, but that teams played 10 fewer regular-season games and the league has witnessed injuries trending upward the past several years.

“None of it is an exact science,” Silver said. “It’s something that even pre-Covid, as you all know, we were very focused on at the league. We put people in place to focus exclusively on injury prevention. Precisely why we have the injuries we do is still unclear to us. It’s something that we’ll continue to study in the off-season.”

He has responded and rallied since, playing some of his best basketball at the age of 36.

Now, Milwaukee and Antetokounmpo will look to blunt his impact and respond in Game 2.

Every team this postseason has fallen through some type of injury or adversity. The winners of the Larry O’Brien Trophy may just be the first team to rise back up.