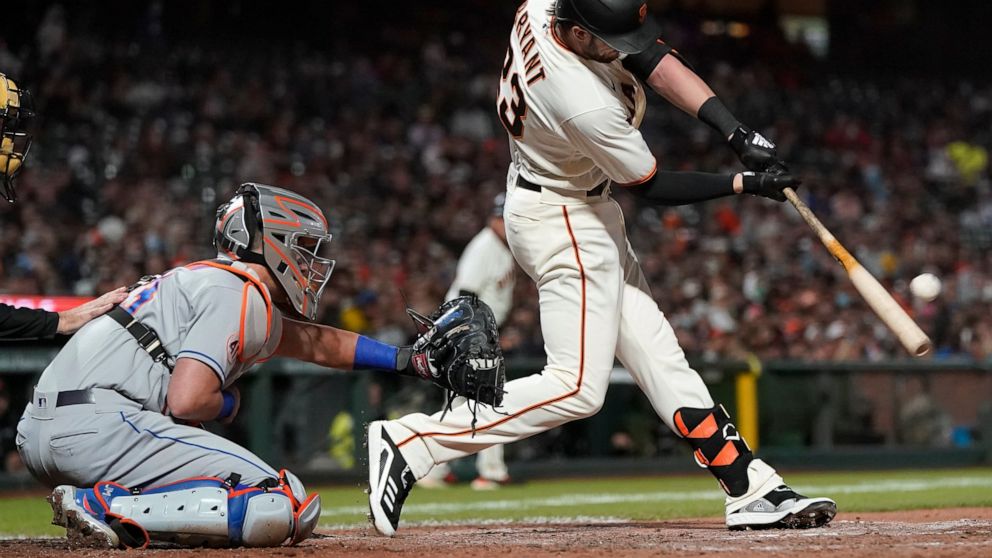 Brandon Crawford had four hits to continue his surge at the plate over the past month. San Francisco’s All-Star shortstop, who signed a $32 million, two-year contract last week, is hitting .427 over his last 28 games.

Brandon Belt also homered and Wilmer Flores added two hits and an RBI. The Giants have won 16 of 21.

Bryant’s two-run homer off Miguel Castro (3-4) in the fifth inning was his first since Aug. 1 — his first game with the Giants after being acquired from the Cubs at the trade deadline — and gave San Francisco a 4-3 lead.

Bryant connected again in the seventh as part of back-to-back home runs off Trevor May. Pinch-hitter Brandon Belt led off the inning with his 16th of the season.

The Mets took a 3-2 lead in the fifth on Pete Alonso’s two-run triple and Dominic Smith’s sacrifice fly off Gausman (12-5).

The right-hander looked shaky for a second straight outing but had seven strikeouts in five innings to beat the Mets for the first time in four career starts. He allowed five hits and three runs.

Jake McGee pitched the ninth for his 26th save.

With the Mets trailing 7-3, Villar homered in the eighth after J.D. Davis reached on an infield single against Tyler Rogers.

The Giants chased starter Rich Hill with five consecutive hits in the fourth. The left-hander, who allowed six hits and two runs in 3 2/3 innings, is winless in five outings with the Mets.

After playing late Sunday night in New York, the Mets flew across the country and arrived at their San Francisco hotel at 4:30 a.m. Monday. Manager Luis Rojas said scheduling later buses allowed for more rest, and players were urged to pay extra attention to their hydration and sleep. The team still took batting practice because some players hadn’t been to Oracle Park and needed to get a feel for the field ahead of first pitch.

FAN ON THE FIELD

A fan ran onto the field in the ninth inning and jogged over near the Mets bench before heading to the mound where he pretended to go into a windup before being taken down by several security guards.

The Mets called up catcher Patrick Mazeika and RHP Trevor Williams from Triple-A Syracuse. RHP Geoff Hartlieb was optioned down.

Mets: SS Javier Báez (back spasms) fielded grounders before the game and the team sounds confident he will be ready to return soon. Báez is eligible to come off the injured list Sunday. … Jacob deGrom’s elbow inflammation is improving but the Mets plan on sticking to a two-week shutdown for the right-hander. … C Tomas Nido was placed on the 10-day IL with a sprained left thumb.

Giants RHP Logan Webb (6-3, 2.96 ERA) has won five consecutive decisions dating to May 11. Mets RHP Marcus Stroman (8-11, 2.79) faces San Francisco for the first time since 2016. Stroman ended a three-start skid in his previous outing when he beat the Nationals.