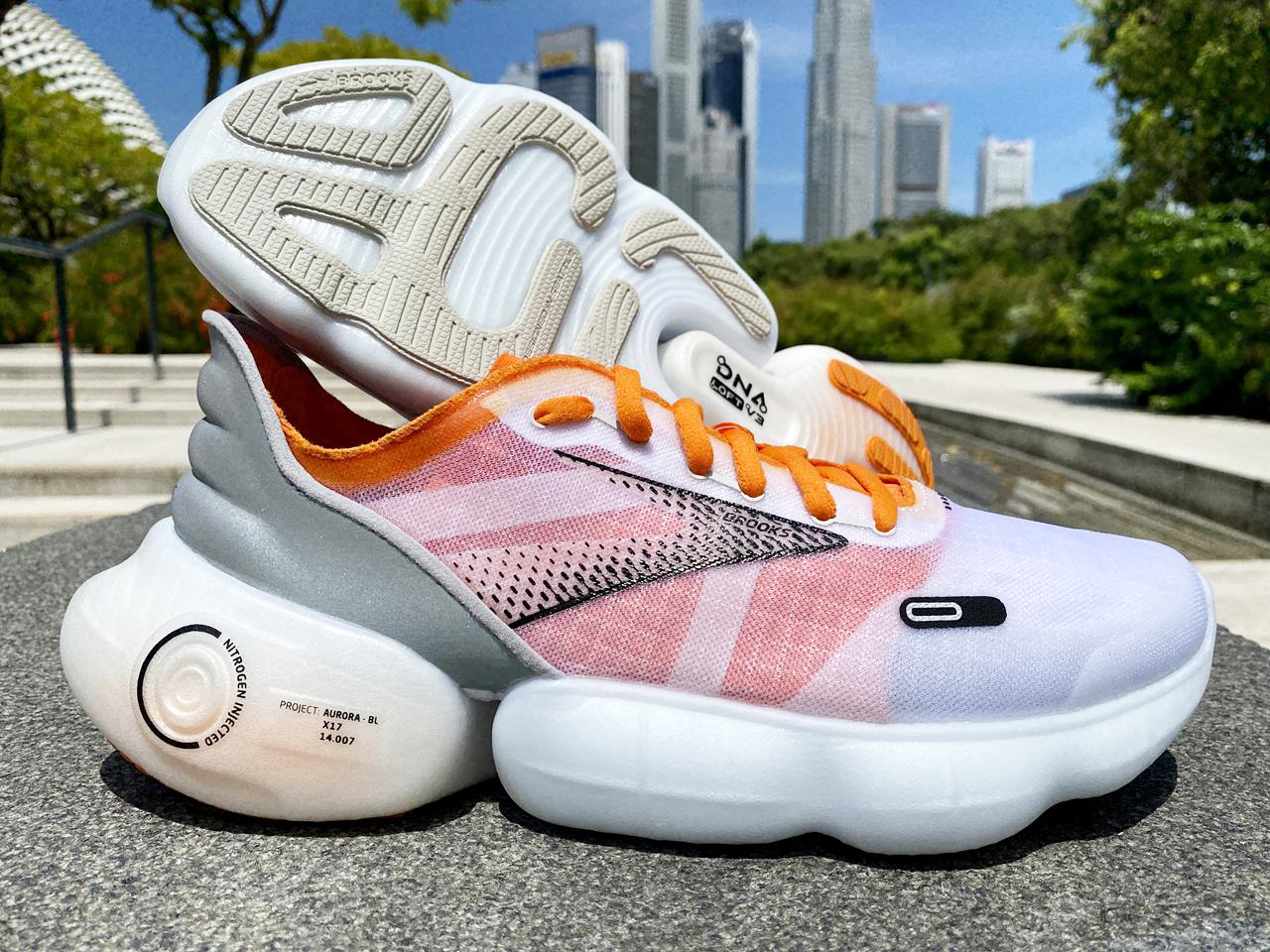 Brooks is not usually a brand that you associate with cutting-edge technologies or pushing the boundaries of innovation. When I think of Brooks, I think of safe running shoes like the Ghost and Glycerin.

However, there is one unique department at Brooks called the Blue Line Lab which is responsible for creating new technologies to ensure that Brooks doesn’t get left in the dust.

The BL in the Aurora’s name stands for Blue Line, in case you were wondering.

The Aurora-BL is a concept shoe. A wild-looking shoe, manufactured in limited quantities, packed to the brim with new technologies. It’s the complete opposite of the bland shoes that Brooks normally puts out.

The Aurora-BL is advertised on the Brooks website as possessing supreme softness, provided by the new midsole foam, DNA Loft v3 which is a Nitrogen infected, supercritical foam.

It’s a super max-cushioned trainer, in the same category as the Nike Invincible Run, the New Balance More and the Hoka Bondi.

The main purpose of the Aurora-BL is to showcase this brand new DNA Loft v3 foam which will be used in their other staple trainers in the future and to also prove that Brooks is an innovative brand.

The Aurora-BL costs a whopping $200 which is a crazy amount to pay for a training shoe, especially one that doesn’t have a carbon plate.

It has a featherlight weight of only 8.5 oz which is lighter than most daily trainers and unheard of for a max-cushioned trainer.

So how good is DNA Loft v3 and is the Aurora-BL a proper performance running shoe or an overpriced gimmick? 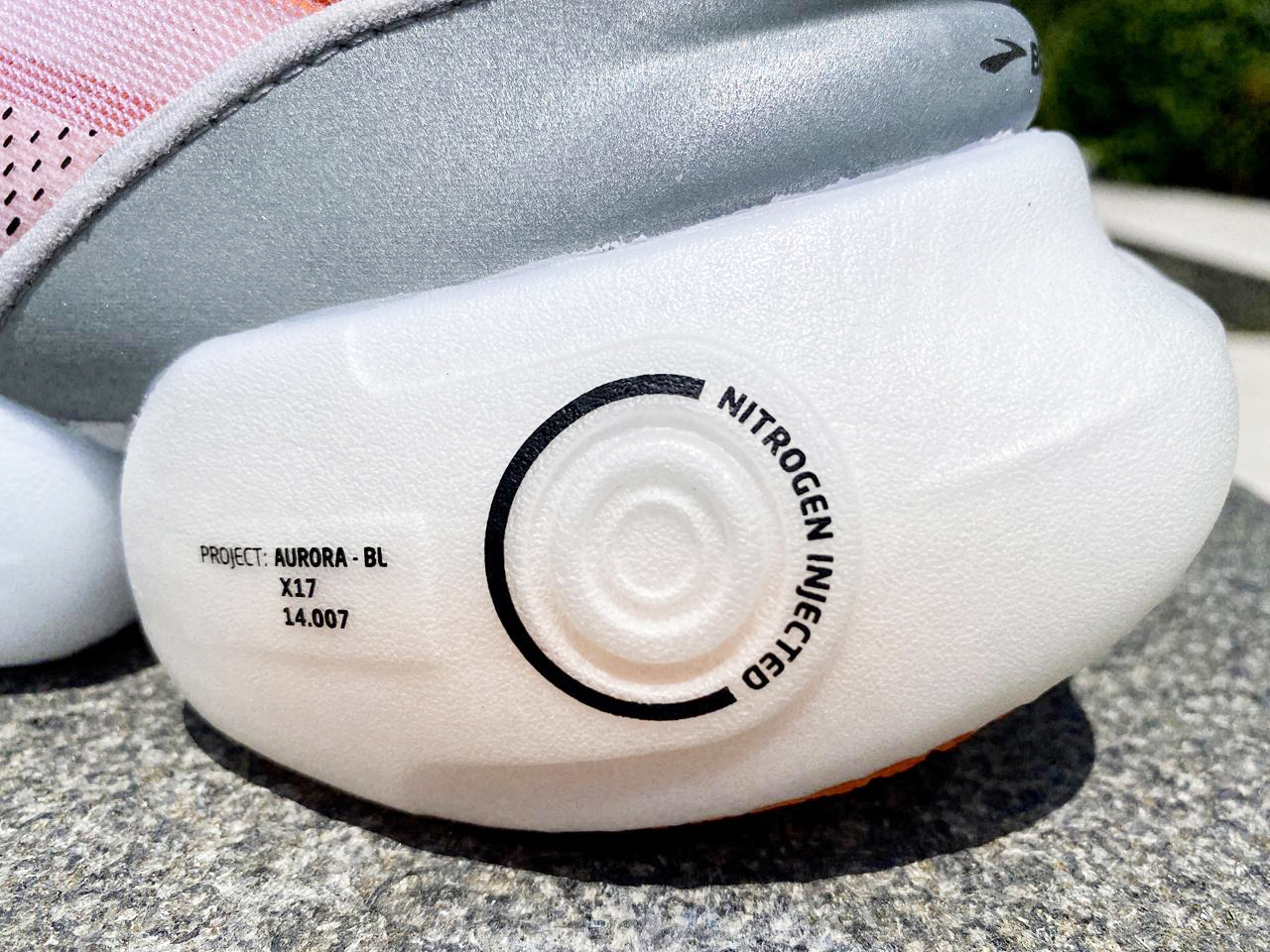 When I saw images of the Aurora-BL for the first time, it reminded me of gimmick running shoes like the VaporMax and the Joyride: two overpriced shoes which are more suited to casual wear than running.

Holding the Aurora-BL in my hands was an experience in itself. Its unique construction is like a toy shoe, with its separate heel that integrates into its midfoot like a jigsaw puzzle piece. 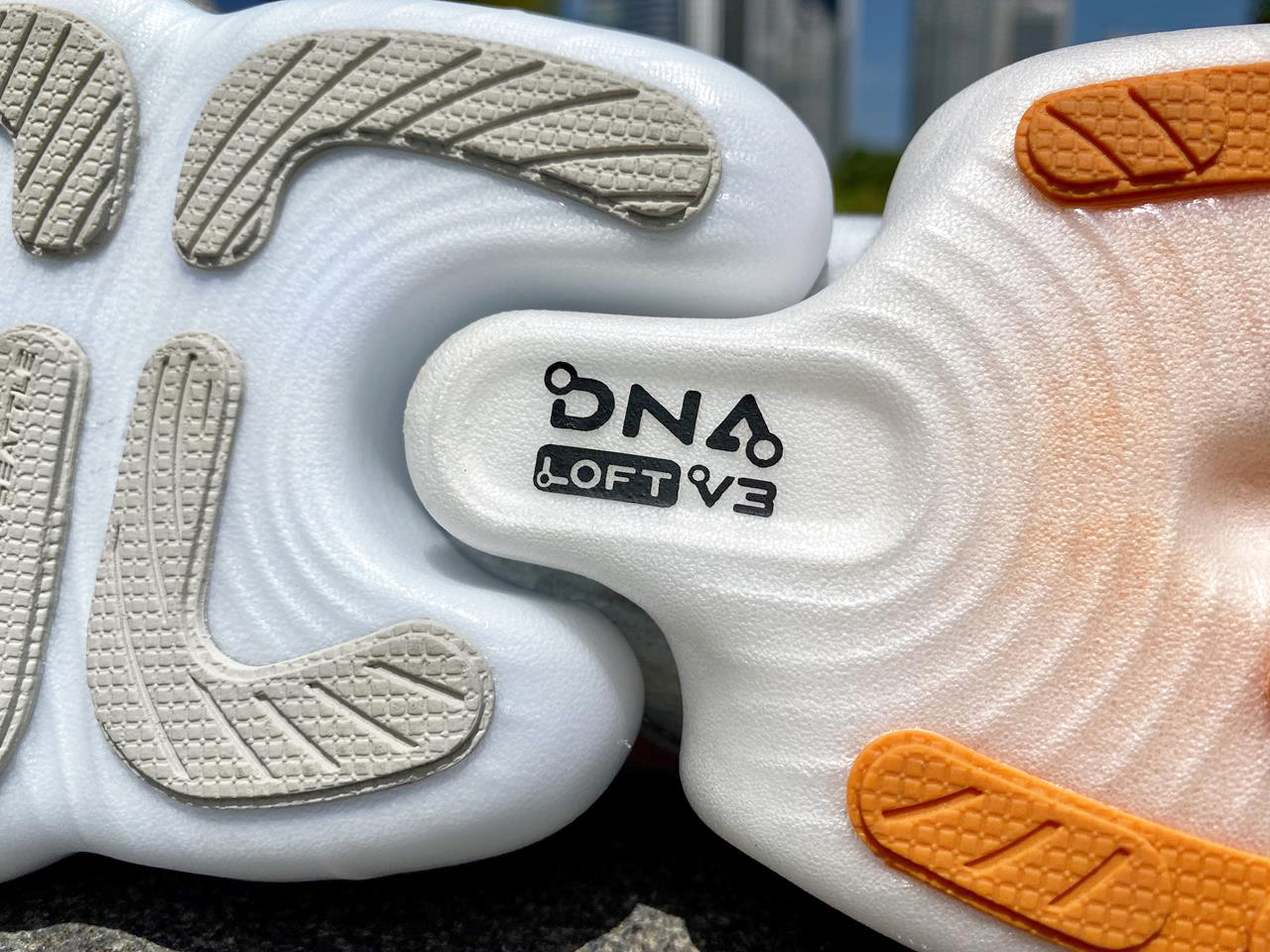 When I walked around in the shoe, I could hear a popping sound emanating from the area where the heel is decoupled from the midfoot.

It was as if a suction cup was attaching to the floor and detaching with every step I took. The popping sound disappeared when I started running.

My first run was supposed to be an 18-kilometer easy run but it turned into a steady run because of how springy the shoe felt.

With such an oversized, jumbo midsole, you’d expect the Aurora-BL’s ride to feel like you’re stepping on fluffy marshmallows but the ride actually feels much firmer and it kept wanting me to increase the pace during my run.

The most surprising thing was how fast the Aurora-BL felt. I genuinely wanted to take it out on a tempo run or an interval workout because of the high level of energy return I felt.

That first run was a lot more fun, engaging and energetic than I thought it was going to be. 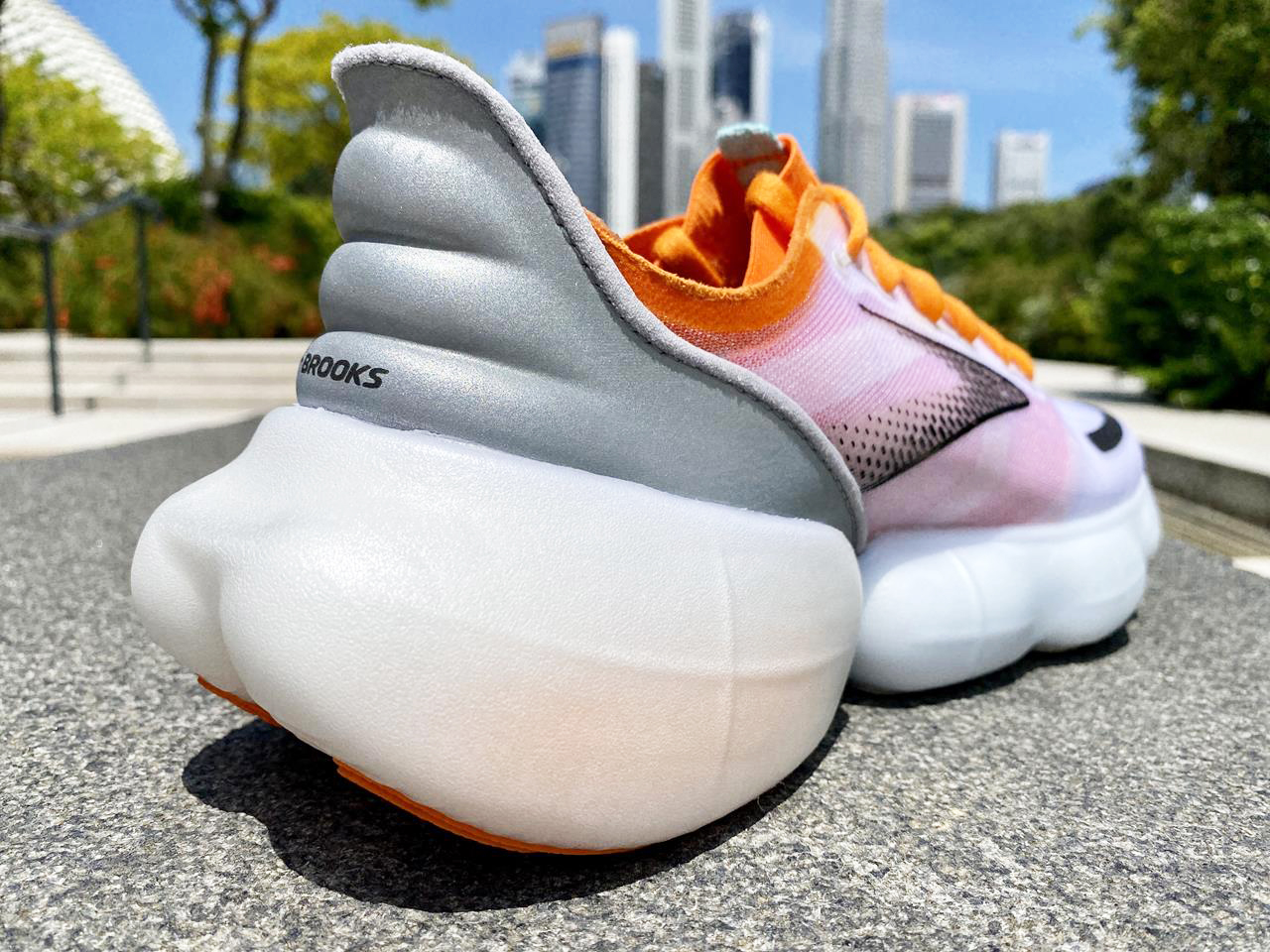 Contrary to Brooks’ marketing claims, the Aurora-BL doesn’t have a super-soft ride. You don’t have the same sinking-in feeling that you get in the Invincible Run or the Rebel v2.

It’s not a very firm ride either. It feels like a finely-tuned ride which returns a high amount of energy during your foot strikes. It feels very energy efficient.

What I like about the midsole is that it has a much more stable ride than other super soft trainers which have a lot of lean bias.

What makes it so stable is its oversized midsole that bulges out at the sides and cups your feet so that your feet feel centered during transitions.

Brooks has a very confusing naming system when it comes to their midsole foams.

DNA Loft v3 bears a striking resemblance to DNA Flash which is found in the Hyperion Tempo and the Hyperion Elite v2- both foams have tiny bubbles and are slightly translucent.

DNA Loft v3 looks and feels nothing like DNA Loft that’s found in the Ghost 14 and the Glycerin 19. Surely it would have made more sense to have named DNA Loft v3, DNA Flash v2 instead? And what happened to DNA Loft v2?

Where the Aurora-BL is a cut above the rest of the max-cushioned trainers is its versatility.

Whether you’re doing recovery paces slower than 6 minutes per kilometer, or tempo paces faster than 4.30 per kilometer, the Aurora-BL feels comfortable and up to the task at hand.

Its lightweight build also makes it suitable for short distances while it’s also enjoyable on middle and long distance runs because of its deep cushioning.

On longer distance runs, the Glide Roll technology makes transitions feel smooth and natural thanks to the sculpted heel and forefoot. There’s also some snappiness to its forefoot which helps increase the pace.

There’s very little rubber on the outsole of the Aurora-BL because the exposed midsole foam can handle daily wear and tear.

Unlike other soft, supercritical foams like FuelCell that get chewed up by rough surfaces, DNA Loft v3 has a high resiliency that reminds me of Puma’s Nitro Foam.

I’ve been very impressed with outsole durability. On my pair, there are only minor abrasions on the outer heel areas after 80 kilometers.

Traction on wet surfaces is below average because of how smooth the exposed midsole foam is.

The Aurora-BL’s upper is also one-of-a-kind. It’s unique and impressive because it’s a half bootie construction but it still allows you to do heel lock lacing to get a more secure fit.

The midfoot and forefoot are made from a thin, transparent monomesh. It has a rough texture and is very porous so breathability is good.

The giant heel cup is a separate piece which is integrated into the rest of the upper well without any annoying seams to irritate your ankle. It has built-in padding and provides excellent heel support without any slippage.

The entire heel cup is reflective so there is plenty of low light visibility from the rear.

When it comes to fit, you can either go true to size if you prefer a snug fit or you can go a half size up for a more relaxed fit. I went a half size up and it fits perfectly with thick socks. 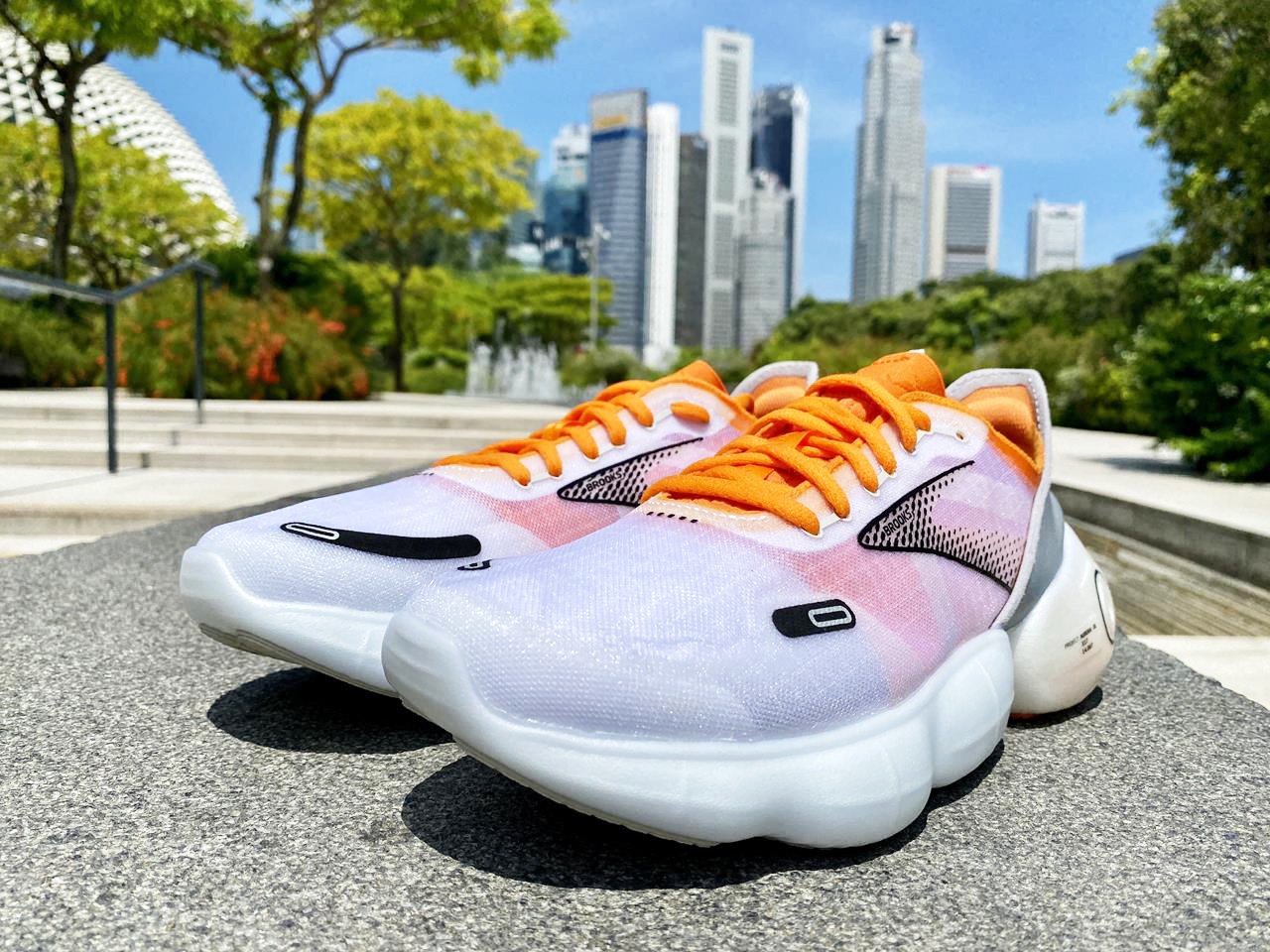 The Aurora-BL is my favourite Brooks running shoe of all time. From the outside, it looks like a pure max-cushioned trainer but it’s actually a really versatile, fun, do-it-all shoe.

The $200 price tag is a tough pill to swallow but the multi-purpose Aurora-BL can be used as your recovery shoe, daily trainer, long run shoe, or even for faster-paced efforts.

Unlike other concept shoes which are gimmicks, the Aurora-BL is not only a proper performance running shoe but one of the best trainers I’ve tested this year.

It has everything that I want in a trainer: an energetic ride, tons of cushioning, good stability and light in weight.

DNA Loft v3 is hands down the best midsole foam that Brooks has in its arsenal and I can’t wait until they start rolling it out in their classics.

It has a high level of energy return in a durable, lightweight package so it can definitely compete with the other leading super foams.

I really hope we see DNA Loft v3 in future versions of the Ghost and Glycerin because this super foam is the real deal.

We purchased a pair of Brooks Aurora from runningwarehouse using our own money. This did not influence the outcome of this review, written after running more than 50 miles in them.