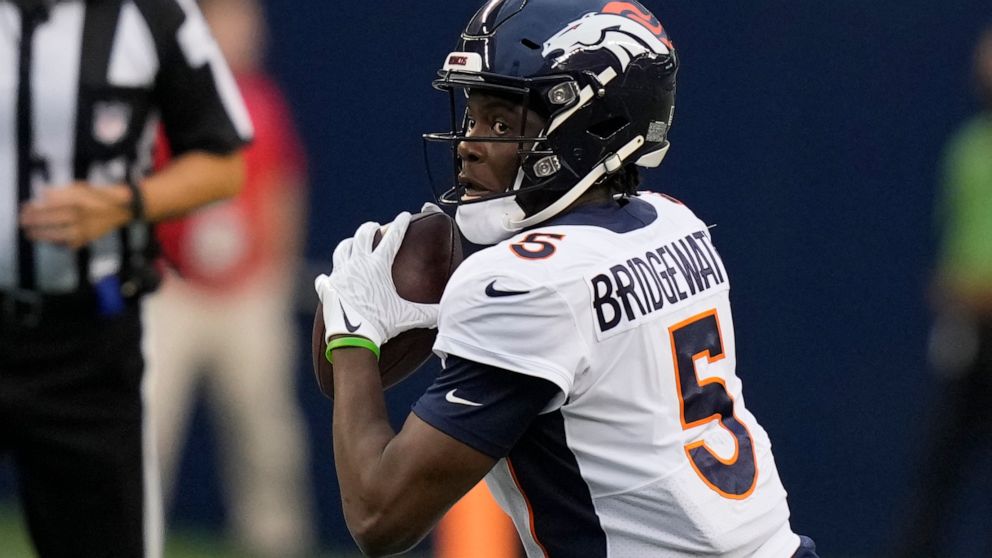 ENGLEWOOD, Colo. — The Denver Broncos are going with the steady over the spectacular.

For much of training camp, the QB clash was a drudging one in which neither passer strung together stellar performances from one day to the next, and sometimes not even from one drill to another. But they elevated their play in the exhibition blowouts at Minnesota and Seattle.

Lock’s preseason included an 80-yard touchdown throw to K.J. Hamler and just Tuesday he began practice with a 60-yard dime to Jerry Jeudy. But he continued to scuffle in three-wide formations and didn’t show as much huddle command, pre-snap management, pocket awareness or precision with his passes as Bridgewater did.

Fangio said Tuesday that there wasn’t a clear-cut leader in the competition, adding, “and it’s close for a good reason: they both have played well. The good news of this competition is we’ve got two quarterbacks that we feel we can go win with.”

Fangio is 12-20 in two seasons, including 0-7 in September, and he cannot afford another slow start with the Giants, Jaguars and Jets on tap next month.

That’s why Bridgewater, with his quick reads and throws that are on-time and on-target if not jaw-dropping, seems a safer bet than the more athletic Lock, a daredevil who may have a higher ceiling but also a lower floor.

Lock’s 15 interceptions last season tied for the league lead. He threw 16 TD passes and went 4-9, missing time with a right shoulder injury and for violating COVID-19 protocols as the Broncos stumbled through their fourth consecutive losing season.

Bridgewater is coming off a bad season himself. He acknowledged this summer he shouldn’t have kept playing after a knee injury in Week 10, and he was also handcuffed in Carolina by an inexperienced coaching staff and the loss of star receiver Christian McCaffrey as the Panthers went 5-11.

Despite showing more maturity both physically and psychologically this summer, Lock faced long odds to keep his starting job once John Elway, who had selected him in the second round out of Missouri in 2019, stepped down as general manager after last season.

Elway’s replacement, George Paton, quickly got in on the Matthew Stafford sweepstakes before the Broncos came to be widely viewed as an ideal landing spot for upper echelon QBs Deshaun Watson (before his legal troubles) and Aaron Rodgers (before he returned to Green Bay).

On the eve of the draft, Paton acquired Bridgewater from the Panthers for a sixth-round pick. The next day, he bypassed Ohio State QB Justin Fields at No. 11 to select Alabama cornerback Patrick Surtain II in the first round.

Afterward, Fangio declared a 50-50 quarterback competition for training camp and said Bridgewater and Lock would each get a start in the preseason before he picked his starter.

And it’s the kind of roster Bridgewater had in Minnesota that same season when he threw just 14 touchdown passes in an 11-5 breakout year that had Minnesotans abuzz. He blew out a knee at practice the following season, however, and only played one more game for Minnesota, in 2017.

After a short stint with the Jets, he served as Drew Brees’ backup for two years in New Orleans and parlayed a 5-0 stint in 2019 into a three-year, $63 million deal with the Panthers last year.

Despite completing 69.1% of his passes, Bridgewater struggled to complete drives and deliver in clutch situations and that led the Panthers to move on to Sam Darnold this offseason.

Bridgewater’s revised contract with the Broncos is for one year and $11.5 million. The Broncos will pay his $4,437,500 salary and the Panthers took on his $7,062,500 signing bonus. The 2022 season was deleted, so Bridgewater can be a free agent in March.

Bridgewater will become the 11th quarterback to start for Denver since Peyton Manning retired following Denver’s Super Bowl triumph five years ago. The Broncos are 32-48 since their 24-10 win over Carolina in Super Bowl 50.