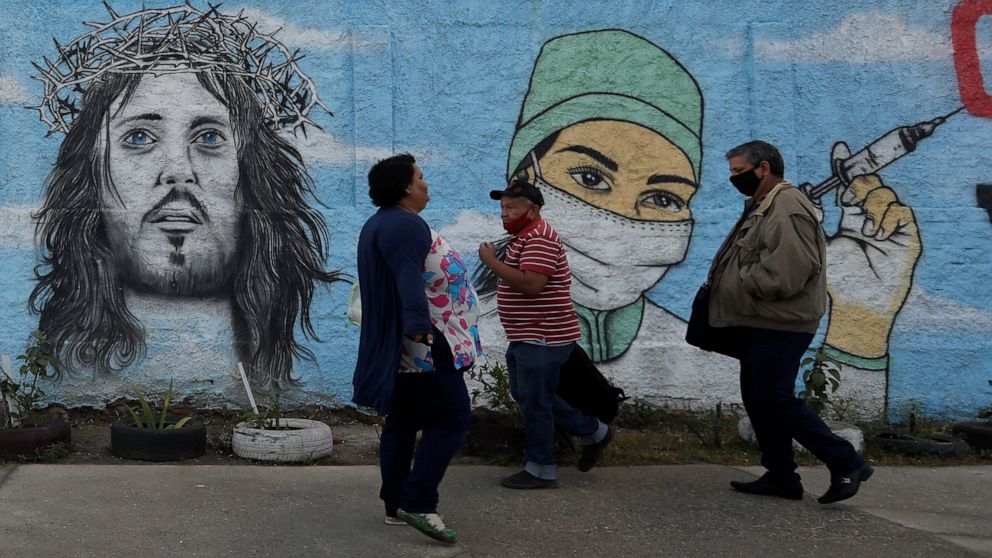 RIO DE JANEIRO — Brazilian health authorities on Thursday began the mass immunization of Rio de Janeiro’s Mare neighborhood in a novel bid to control COVID-19 in a poor community while studying vaccine effectiveness and the prevalence of worrisome variants.

The bayside Mare complex is comprised of more than a dozen so-called favelas and home to some 130,000 people, and the study is Brazil’s first to target a low-income area. The Brazilian researchers leading the effort aren’t aware of another elsewhere in the world that has specifically focused on slums.

Rio is currently providing first vaccine doses to 34-year-olds. As such, the Brazilian government’s Fiocruz Institute aims to inoculate more than 30,000 Mare residents aged 18 to 33, and bring vaccine coverage of the adult population to near 100%, according to Dr. Fernando Bozza, the study’s coordinator. First doses of the AstraZeneca vaccine will be administered over the course of three days at 30 locations across Mare.

“This is important for Mare and for Brazil as a whole. Here in Rio de Janeiro, more than 1.5 million people live in favelas. Research is usually done in hospitals and health units,” Dr. Valcler Rangel, Fiocruz’s adviser for institutional relations, told reporters.

Before one station opened its doors in the early morning, already 100 people were lined up outside.

Those who choose to can also participate in Fiocruz’s study, for which the institute intends to recruit 2,000 families.

After her shot, Jennifer Cardoso Nunes, 27, signed a consent form and answered survey questions about her medical history, recent experience with anxiety, whether she works from home and the number of people with whom she lives. She shares her home with her grandmother and five aunts and uncles, all of whom will receive blood tests at the study’s 3-month and 6-month marks.

“I think it’s important we participate in this research precisely so they can monitor this pandemic,” said Cardoso.

Any positive COVID-19 tests in Mare over coming months will be genomically sequenced, which at present is scarcely done in Brazil. That will allow for observation of worrisome variants, like the highly contagious delta strain that has begun circulating in Rio and other Brazilian cities after ravaging majority unvaccinated populations in other nations.

Evaluating the vaccine’s effectiveness against new variants like delta is one of the study’s focuses, said Bozza.

“The intensification of vaccination is necessary to control the spread of the new variant,” he added.

Less than half of Brazilians have received a first shot and less than one-fifth are fully vaccinated, according to Health Ministry data.

Brenda Ferreira da Silva, a law student who received her first shot, criticized Brazil’s “vaccine sommeliers” — a moniker for those who refuse AstraZeneca or Sinovac that comprise the vast majority of available vaccines and instead seek out Pfizer or Jannsen shots.

“If we keep trying to get X or Y vaccine, it delays the collective vaccination and herd immunity from having everyone vaccinated. So I think it’s very sad, and people need to stop with that,” said da Silva, 20. Based on Rio’s vaccination schedule, she wouldn’t have received her first shot until Aug. 16.

Fiocruz has already carried out a mass vaccination program with AstraZeneca on the Paqueta island in Rio’s Guanabara Bay, as well as in Botucatu, a city in Sao Paulo state. Sao Paulo’s state-run Butantan Institute conducted a mass vaccination study in another city of its interior, Serrana, using the Sinovac vaccine.