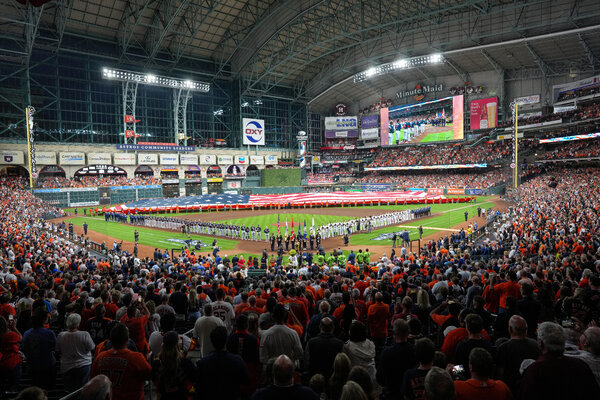 Jorge Soler started the World Series with a home run for Atlanta. But he’s had an odd month: He tested positive for the coronavirus during the division series against Milwaukee and only returned to the Atlanta lineup during the National League Championship Series against the Dodgers.

Game 1 of the 2021 World Series is underway, with Houston’s Framber Valdez delivering a first pitch ball to Atlanta’s Jorge Soler. This should be a fun one.

Step into the visitors’ dugout at Minute Maid Park tonight and you will find Brian Snitker, Atlanta’s manager since 2016. Across the park, in the home dugout, is Troy Snitker, a hitting coach for the Astros and Brian Snitker’s son.

“I don’t think it’s anything we ever even dreamed of,” Troy Snitker said this week. “To be in the big leagues at the same time while he’s a major league manager and I’m in the big leagues here, just that alone would be very special — past our wildest dreams to get to this point to both win the pennant and get the face-off, it’s something that we never could have dreamed of as a family.”

Troy Snitker joined the Houston coaching staff in 2019. That was just a few years after his father, after decades of toiling in the Atlanta organization, finally got his shot at managing the team.

“We talked about this last night at dinner, how we needed to just enjoy this,” said Brian Snitker, who paid the check. “You’re never guaranteed this. Who knows when you’re going to get back? Enjoy it and relish in it.”

Their methods, some of which they said they had learned from each other, have been working so far: Houston led the majors in batting average, hits and runs during this regular season, and Atlanta managed enough victories to reach the playoffs for a fourth straight year.

So it was hardly surprising when both men said that business would overtake the sentimental as soon as Game 1 started.

“Once this thing is tipped off and the first pitches are thrown, we have jobs to do,” Brian Snitker said. “It’s all about winning games. All this is great and everything, but like I say, we’ve got a job to do.”

Minute Maid Park is getting very loud as fans settle into their seats and first pitch approaches. Both starting pitchers warmed up in their distinct ways before they head to their respective bullpens. Charlie Morton of Atlanta played a little long toss and then started an energetic knees-up, high step exercise before he resumed some short catch that stretched out to about 200 feet. Framber Valdez, the Houston starter, started off with a short game of catch with a heavy ball to loosen up his shoulder joint, and his long toss is something to behold. It looks as if he is firing little white missiles about 250 feet on a line.

HOUSTON — Eddie Rosario may be the hottest hitter on the planet, but after batting leadoff in five of the six N.L. Championship Series games against Los Angeles, knocking out 14 hits and being named as series M.V.P., Jorge Soler’s return to the lineup has dropped Rosario down to fifth in Atlanta’s lineup for Game 1 of the World Series.

The reason? Left-hander Framber Valdez is starting for Houston. The only time Rosario did not lead off in the N.L.C.S., the Dodgers had started lefty Julio Urias. Soler, who was activated from the Covid-19 list before Game 5 of the N.L.C.S., bats right-handed. Tonight is his first start since being cleared.

“Last time we did that, we scored the most runs we’d scored in the postseason,” Atlanta Manager Brian Snitker said, referring to his team’s 9-2 Game 4 win over the Dodgers, during which Rosario had four hits and four R.B.I.

Snitker continued: “Right now, I plan on going back to him leading off tomorrow. I weighed both things all night, and then just looking at how actually we could balance the lineup. Because this is the postseason. You never know what they’re going to do. Guys do stuff different than they have. And I find myself doing that. So you just try and structure the lineup for the game, for this one game.”

Atlanta also added outfielder Terrance Gore and right-hander Kyle Wright to its World Series roster in place of infielder Johan Camargo and right-hander Jacob Webb. Gore’s only major-league experience this season came as a pinch-runner in a division series against Milwaukee, and he was not on Atlanta’s N.L.C.S. roster.

The cloak of mystery that sometimes shrouds the beginning of a series was weighing on each manager’s mind.

The Astros added utilityman Marwin Gonzalez to their World Series roster in place of outfielder Jake Meyers, who hurt his shoulder when he ran into the outfield wall attempting to make a play in the division series against the Chicago White Sox.

“Marwin is a switch hitter,” Baker said. “He gives me a lot of flexibility in positions, and he has World Series experience so you know he’s not going to be, like, in awe of the game of the situation.”

But if you ask Brent Strom, the Astros’ pitching coach, who his team’s M.V.P. is, he’d say Martín Maldonado, the catcher who was the second worst regular batter in the majors this season, and has been even worse in the postseason.

How does that work? Well, as James Wagner found out, Houston values Maldonado’s defense and his handling of the pitching staff so much that it is just fine going into every game knowing that his spot in the batting order will mostly likely result in three to four outs (he is 2 for 29 in the postseason thus far).

But with Houston back in the World Series, even as nearly all of the team’s star pitchers have fallen away, Strom may have a point.

I’m very proud (OK, irrationally proud) of an extremely odd skill: I can name the starting pitchers for every World Series game since 1979, and every final play since 1960. Charlie Morton appears on both lists: He started Game 4 for Houston in 2017, got the last out in Game 7 of that World Series, and started Game 3 for Tampa Bay in 2020.

Morton starts for Atlanta in Game 1, making him the first pitcher ever to get the last out of the World Series for one team, then face that team in a later World Series. But there’s more, with a hat tip to Michael Medvin of the YES Network: Tonight, Morton will become the sixth pitcher since 1980 to start for three different teams in the World Series. How many of the others can you name?

With Houston hosting Game 1 and enjoying home-field advantage, Atlanta will bat first tonight. But it’s a wonder Atlanta is even in the game; in fact, it’s somewhat amazing Atlanta made the postseason at all.

Injuries. Off-field turmoil. Early losses. They all fed a sense of disarray and disappointment around a team, seen before opening day as a contender, that did not have a winning record until Aug. 6.

“You know, even teams that don’t have great years get on a run, even the bad teams,” Brian Snitker, Atlanta’s manager, observed over the weekend after his team won the National League pennant.

“We hadn’t got on a run yet and we weren’t a bad team,” he added. “We just had a hard time putting everything together for an extended period of the season. But we were a good team, and I just kept thinking, man, our best baseball’s ahead of us.”

We looked at the ups and downs of Atlanta’s season — one with few rivals in history for such a wild path to the World Series.

The experience gap in Game 1’s pitching matchup is wide. Atlanta’s Charlie Morton, a 37-year-old right-hander, is in his 14th season and has 16 career postseason appearances (15 starts). This is his third World Series, and in his most memorable postseason moment — which was his lone relief appearance — he threw four solid innings to close out Game 7 of the 2017 World Series, securing the Astros their first championship.

Framber Valdez, 27, is in his fourth season but had never started more than 10 games in a year until 2021. He caught on quickly, with a 3.14 E.R.A. in 22 starts. Like Morton, though, Valdez is no stranger to the postseason: This will be his eighth appearance (seventh start) over the last two Octobers; he won three games in Houston’s playoff run last year. While he got off to a slow start in the 2021 playoffs, his last start was an eight-inning masterpiece that was the longest appearance by any starter this postseason.

Who: The Atlanta Braves vs. the Houston Astros

What: The 117th World Series

Watch: The games will be broadcast on Fox and can be streamed on various services like FuboTV, Hulu Live and YouTube TV.