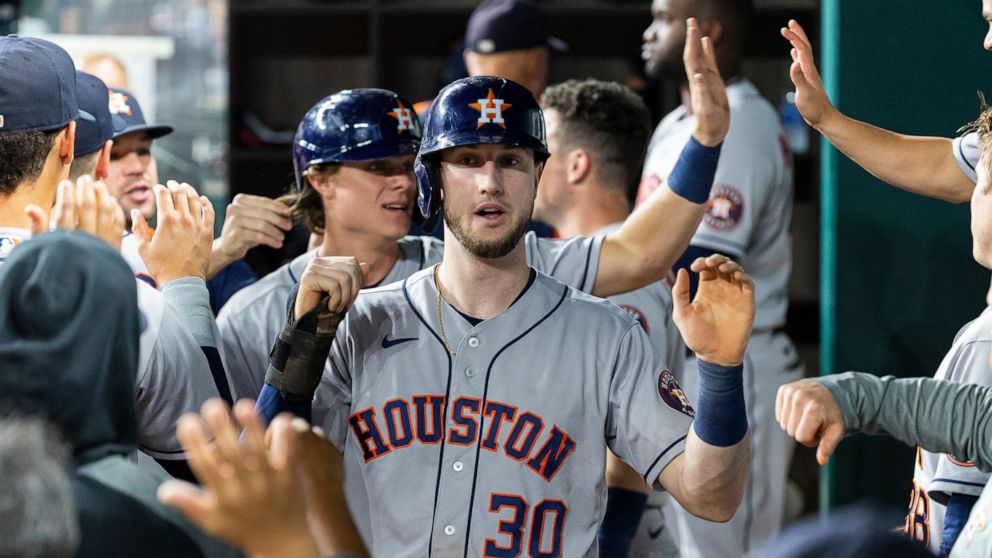 ARLINGTON, Texas — Michael Brantley hit a tying, two-run single when he was the sixth consecutive Houston batter to reach starting the seventh inning, and the AL West-leading Astros rallied past the last-place Texas Rangers 5-4 on Friday night.

Before that big outburst against two relievers, the Astros managed only two hits and struck out seven times against Rangers starter Glenn Otto as he went five scoreless innings in his big league debut.

Phil Maton (3-0), the second of five Astros pitchers, got the win despite allowing two runs in his only inning of work. Ryan Pressly worked the ninth for his 20th save in 22 chances.

Houston finally scored when Jake Meyers had a two-run double off Brett Martin (3-4), the second Texas reliever in the seventh. Brantley, the leadoff hitter who finished with three hits and leads the AL with a .320 batting average, singled up the middle to make it 4-4.

The Astros took the lead when Martin Maldonado, who had walked before Brantley’s big hit, came home on a grounder by Yuli Gurriel, who beat out the relay throw to avoid an inning-ending double play.

Maldonado had gone from second to third on a flyball into the left-center gap, avoiding the tag by reaching to the base with one hand on his headfirst slide.

Andy Ibañez homered as part of his seventh consecutive game with multiple hits for the Rangers. He had a single in the third to extend his overall hitting streak to 11 games, matching the longest for a Texas player this season. His solo homer in the fifth off Astros starter Jake Odorizzi matched the longest streak of multiple-hit games in the majors this season.

The Rangers, an MLB-worst 9-29 since the All-Star break, led 4-0 after Yohel Pozo and Jose Trevino had back-to-back RBI doubles with two outs in the sixth.

Otto threw 57 of his 73 pitches for strikes and didn’t walk a batter. The 25-year-old right-hander, who was born and grew up in the Houston area, was one of four prospects acquired from the Yankees in the trade last month that sent All-Star slugger Joey Gallo to New York. Otto was added to the big league roster after right-hander Spencer Howard became the seventh Texas player added to the COVID-19 related injured list.

He was the 12th Rangers player to make his MLB debut this season, and the club-record 25th rooked used by Texas.

Astros: Manager Dusty Baker said OF Chas McCormick, who was put on the injured list earlier this week with a hand issue, is on the trip and working out with the team.

Rangers: RHP Kohei Arihara, out since May 9 because of right shoulder surgery to repair an aneurysm, allowed one unearned run over two innings in a rehab start for Triple-A Round Rock. He could be back with the Rangers to start Wednesday, the first day MLB rosters can expand from 26 to 28 players.

Astros left-hander Framber Valdez (8-4, 2.94 ERA), who beat the Rangers with six scoreless innings last month, starts the middle game of the weekend series. Texas lefty Kolby Allard (3-10, 4.86) has recorded four consecutive quality starts this month, though has only one win to show for that stretch.