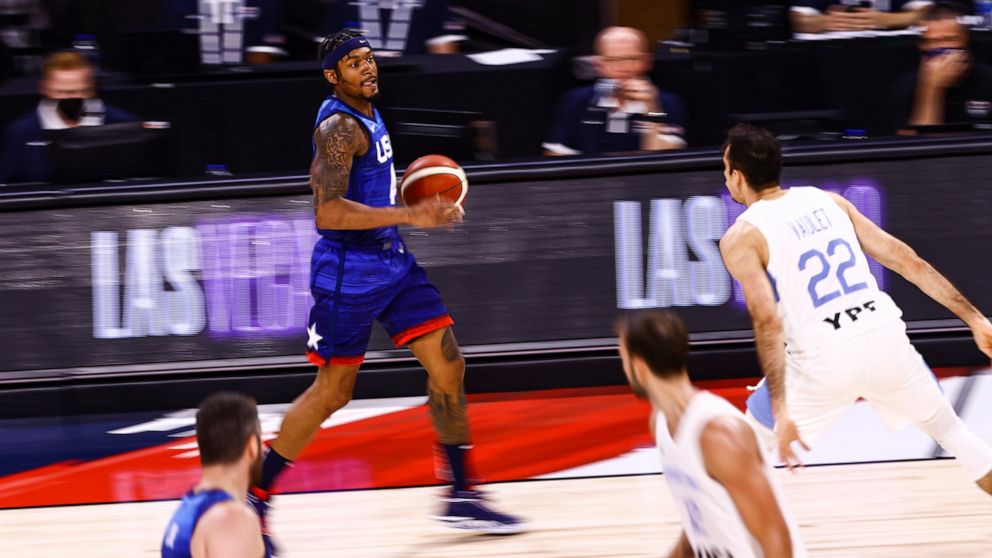 Bradley Beal will miss the Olympics after being placed into health and safety protocols and the U.S. men’s basketball team said it will replace him on its roster at a later date

On a U.S. basketball team filled with stars, nobody scored more than Bradley Beal during the season.

At the top of his NBA game, he was finally set to take on the international one.

The coronavirus has wrecked his Olympic dreams.

Beal will miss the Olympics after being placed into health and safety protocols and USA Basketball said Thursday it will replace him on its roster at a later date.

“I’m dying for him,” coach Gregg Popovich said. “We all are.”

The Americans also announced that forward Jerami Grant has also been played in health and safety protocols “out of an abundance of caution.” Popovich said the Americans didn’t expect that his Olympics would be in jeopardy.

It is unclear if Beal has been vaccinated. He had started all three exhibition games for the U.S. so far in Las Vegas, averaging 10.3 points on 10-for-21 shooting.

The Washington Wizards guard was second in the NBA this season with 31.3 points per game. Only Stephen Curry, who passed on the Olympics, averaged more.

U.S. forward Bam Adebayo said he checked on Beal, who told him that he had no symptoms. Still, his news was a tough blow to the players who said they have been following safety recommendations and hoped for good health.

“It still definitely gives you PTSD, somebody catching COVID,” Adebayo said. “I remember when I had it, just one of those things I wouldn’t wish on anybody.”

Beal was expected to play for the Americans two years ago in the Basketball World Cup in China, but had to withdraw from consideration before training camp for family reasons.

He finally had his chance to suit up for the senior national team now and he seemed ready for it.

After scoring just two points in the Americans’ loss to Nigeria in their opener, he followed with 12 points against Australia and then had 17 on Tuesday against Argentina in the first U.S. victory.

“Bradley, there’s no doubt, he’s a huge loss. He was playing every well, understanding everything and fit in well with the group,” Popovich said. “So there’s no next Bradley Beal.”

Beal’s NBA team was hit hard by a coronavirus outbreak early in the season and every club had to navigate players going in and out of the lineup because of the strict protocols in place.

Golden State’s Draymond Green said it’s difficult to see the impact the virus still has after 17 or 18 months and that it’s “still costing people the opportunities of a lifetime.”

“The experience, the opportunity to represent your country is one that we all dream about growing up,” Green said. “So to see that opportunity taken away, you can only sympathize with Brad.”

Green added that he hoped Beal would be given a gold medal if the Americans are able to win the tournament for the fourth straight time, because he had made the commitment.

The Americans have already been playing short-handed during their exhibition games, with Khris Middleton and Jrue Holiday of Milwaukee and Devin Booker of Phoenix playing in the NBA Finals.

Popovich said the challenge for the Americans will be finding a player who is in good shape, after the NBA regular season ended in May.

He said they are going through names who are available and trying to see who would be a fit. He added that the Americans wouldn’t be able to replace Beal as a scorer and might end up with someone like a utility player in baseball.

The Americans are still scheduled to play Spain on Sunday before heading to Tokyo, with their opening game against France set for July 25.