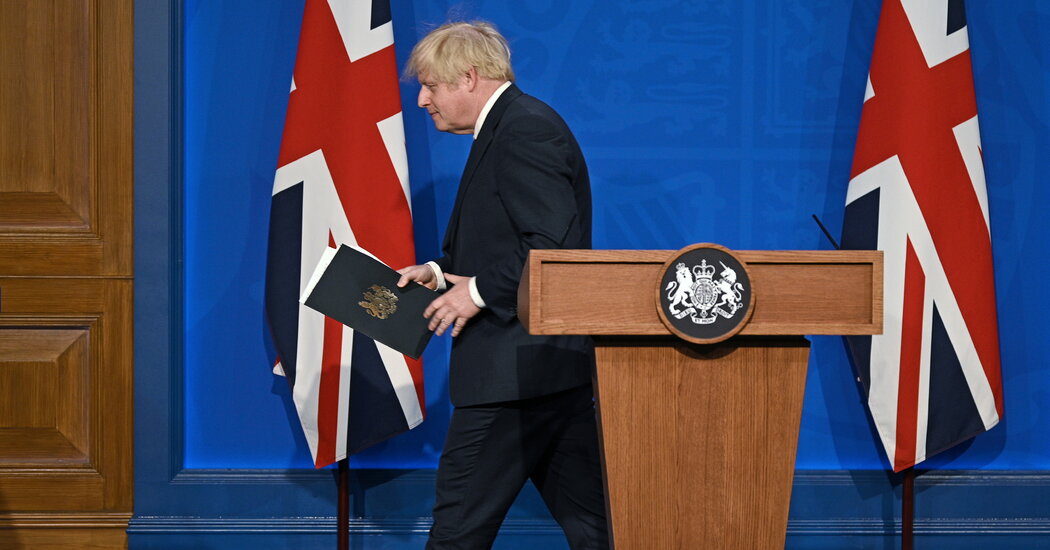 LONDON — Prime Minister Boris Johnson of Britain has labored to distance himself from Donald J. Trump since the change of power in Washington, and not without success. His first face-to-face meeting with President Biden last month went smoothly: The two found common ground on climate change and Mr. Johnson labeled Mr. Trump’s successor a “big breath of fresh air.”

But now Mr. Johnson finds himself back in crosswinds of the kind Mr. Trump used to stir up. His refusal to condemn crowds who booed England’s national soccer team for kneeling to protest racial injustice carries a distinct echo of Mr. Trump’s targeting of N.F.L. players who knelt for the same cause in the United States.

One of his cabinet ministers criticized the players for engaging in “gesture politics,” while his spokesman said of the jeering spectators that the prime minister “fully respects the right of those who choose to peacefully protest and make their feelings known.”

In Mr. Johnson’s case, it was less what he said than what he failed to say. But in England, as in the United States, the mix of sports, politics and racial justice has proved volatile, boomeranging on a prime minister whose populist instincts on cultural issues have often served him well.

England’s inspiring run in the European soccer championship captivated the nation. When three of its Black players were subjected to racist abuse after their crushing loss last weekend in the final, it put Mr. Johnson’s silence, and the gibes of other Conservative politicians, under a harsh spotlight. Suddenly, they were on the wrong side of a team that symbolized England’s racial diversity.

“This was the Trump playbook, and it worked for Trump until George Floyd,” said Frank Luntz, an American pollster, referring to the killing of an unarmed man by the police last year in Minneapolis. That crime ignited enormous protests against racism and police violence, overwhelming Mr. Trump’s campaign to fire football players who refused to stand during the national anthem.

Mr. Luntz, who has advised many Republican candidates, is now working with the Center for Policy Studies, a London research institute with historic ties to the Conservative Party, to survey voter attitudes in Britain. A classmate of Mr. Johnson’s at Oxford University, Mr. Luntz rejects the comparisons of the prime minister to Mr. Trump. (The better analog, he says, is Ronald Reagan.)

But Mr. Luntz said there were other alarming parallels between Britain and the United States. The deep polarization of voters, he said, has led to an exploitation of some issues — whether the populist appeals of Mr. Johnson’s Conservatives or the political correctness of the left — that threaten to corrode British politics as badly as they have American politics.

“We’ve crossed the Rubicon in the United States,” he said. “They’re getting perilously close to crossing it here.”

While Mr. Trump eventually dropped the N.F.L. campaign, Mr. Johnson is in full-fledged retreat. Under questioning by the Labour Party leader, Keir Starmer, this week in Parliament, a rattled prime minister insisted he wholeheartedly supported the England team. “I support them in the way they show support with their friends who face racism,” Mr. Johnson added.

That did not mollify Mr. Starmer, who declared: “The government has been trying to stoke a culture war, and they have realized they are on the wrong side. And now they hope that nobody has noticed.”

The bigger threat to Mr. Johnson comes not from politicians but the players, some of whom have struck back at the eruption of racist gibes on social media after the team lost to Italy in a penalty shootout. Bukayo Saka, one of three young Black players who missed their kicks, posted on Twitter that “there is no place for racism or hate of any kind in football or in any area of society.”

Tyrone Mings, a defender who is Black, drew a direct link between the abuse and the government, tweeting, “You don’t get to stoke the fire at the beginning of the tournament by labelling our anti-racism message as ‘Gesture Politics’ & then pretend to be disgusted when the very thing we’re campaigning against, happens.”

His reference was to Mr. Johnson’s home secretary, Priti Patel, who said the team’s practice of kneeling was “gesture politics” and refused to condemn fans for jeering it. Lee Anderson, a Conservative member of Parliament who was elected in 2019 in a surge of pro-Brexit support for Mr. Johnson’s party, vowed not to watch England games as long as the players knelt.

Ms. Patel, who is one of the most hard-line cabinet ministers on immigration issues, played a supporting role in this drama not unlike that of Vice President Mike Pence in Mr. Trump’s N.F.L. crusade. In October 2017, under orders from the president, Mr. Pence conspicuously walked out of a game in Indianapolis.

Mr. Johnson has been more subtle than was Mr. Trump, who once described a protesting player as a “son of a bitch.” The prime minister never openly criticized the team, leaving it to a spokesman to respond to questions about booing fans.

There are several reasons for Mr. Johnson to tread carefully. England’s team represents the nation, not the interests of wealthy private owners, like a typical N.F.L. franchise. England’s players sing “God Save the Queen” and kneel for only a few moments before kickoff. That makes them less vulnerable to charges of being unpatriotic than players sitting out the “The Star-Spangled Banner.”

Most important, under its manager, Gareth Southgate, the England team has found rare success on and off the field. It reached the first final of a major tournament in 55 years, vanquishing Germany and Denmark. And its players have used their fame effectively in pursuit of social justice — completing a decades-long transformation in the team’s image from the days in which some viewed it uncomfortably, as symbolizing a strain of English nationalism linked to the right.

Another of its Black players, Marcus Rashford, led a campaign that forced Mr. Johnson to reverse plans to end a free-lunch program for poor families during the pandemic. After Mr. Rashford also missed his penalty kick in the final, vandals defaced a mural of him in his native Manchester with racist graffiti. Within hours, the slurs had been covered with hearts, letters and English flags.

Mr. Southgate, in an eloquent “Dear England” letter, steadfastly supported his players’ rights to get involved in political issues. He said it was natural they would have different views of being English than people of his generation — a distinct contrast to the messages that were delivered by the N.F.L. and its owners. The league’s commissioner, Roger Goodell, first required players to stand for the anthem before reversing himself amid the Black Lives Matter protests.

All of this left Mr. Johnson wrong-footed. Only a few months ago, he stridently opposed plans to form an elite European superleague, presenting himself as a champion of soccer’s working-class fans. Now, though, Mr. Johnson’s gestures — wearing an England “Three Lions” jersey or flying an English flag outside 10 Downing Street — struck many as belated and inauthentic.

“It’s confused the Tories; they don’t know how to run with this,” said John M. Williams, a sports sociologist at the University of Leicester. “They have their own right-wing constituency, so they feel they have to go after the taking of the knee. But they’re afraid that the England team is doing politics better than they are.”

As in the United States, Mr. Williams said, social issues in Britain are part of a deeper debate — between a liberal, inclusive, multiracial society and its opposite. “Weirdly,” he said, “the England national team is at the heart of this debate.”