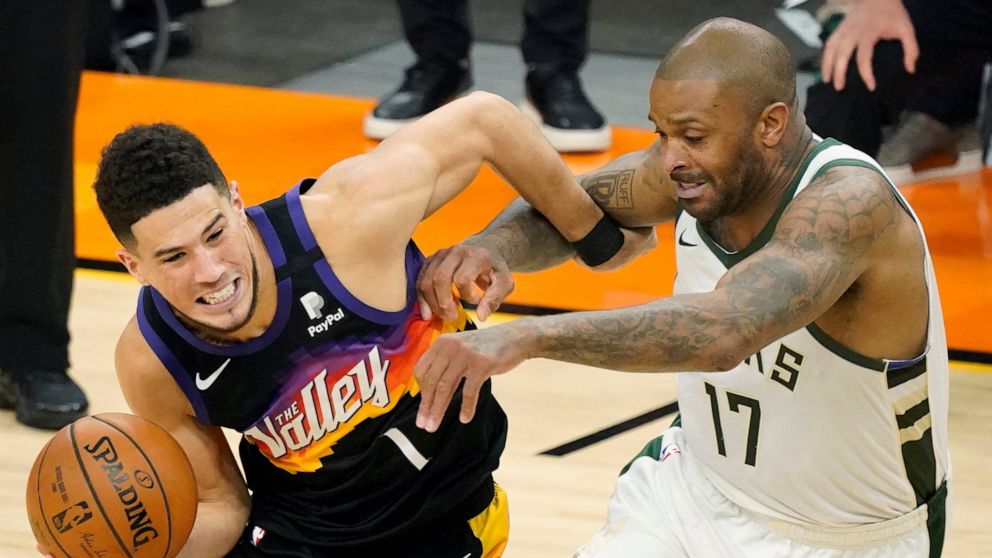 When Devin Booker took his usual seat on the bench at the beginning of the second quarter, the Phoenix Suns lost their stranglehold on Game 5 of the NBA Finals

PHOENIX — When Devin Booker took his usual seat on the bench at the beginning of the second quarter, the Phoenix Suns lost their stranglehold on Game 5 of the NBA Finals.

Booker had scored 11 points and the Suns built a 16-point lead on Saturday night against the Milwaukee Bucks. The Footprint Center was in a frenzy and Phoenix couldn’t miss a shot.

Then things changed. Over the next 5 minutes and 46 seconds, the Bucks began their comeback.

By the time Booker returned with 6:14 left in the second, the Suns’ lead had nearly disappeared. The Bucks had taken all the momentum and never let it go on the way to a 123-119 win to take a 3-2 series lead as the scene shifts back to Milwaukee for Game 6 on Tuesday night.

“We came out and did what we intended to do, get off to a great start and we let it go,” Booker said. “They stayed resilient and they kept playing through. So, tough loss for us.”

Booker was impressive for the second straight game, scoring 40 points on 17 of 33 shooting after his 42-point performance in a Game 4 loss.

But the rest of the Suns were either inconsistent or non-existent.

Phoenix looked stagnant on offense, relying on Booker to generate offense by himself. That was readily apparent on a crucial possession in the final minute when Booker drove to the basket, the Bucks’ defense collapsed, and Milwaukee point guard Jrue Holiday ripped the ball away for a steal to seal the win.

“We’ve got to move it around,” Suns coach Monty Williams said. “We know what Book can do with the ball, but the one thing we talked about was getting to the paint, finding guys on the back side. We feel like that’s a formula. There were some times tonight where it just stuck a little bit.”

Holiday outplayed Phoenix’s Chris Paul for a third straight game. Deandre Ayton scored 20 points but wasn’t his usual rim-protecting self on defense. Jae Crowder was quiet after a few early 3-pointers and a dunk. Mikal Bridges had a few good moments but the Suns needed more.

Booker’s teammates were able to step up during a fourth quarter push, but it proved to be too late.

The Suns have always depended on Booker’s production, particularly when it comes to scoring. Even when Paul — an 11-time All-Star and future Hall of Famer — was added to the roster during the offseason, it was the 24-year-old Booker who remained the cornerstone, having grown up over six years while the franchise built into a championship contender.

The difference this season was that Booker usually had plenty of help.

The Suns employed a high-octane offense that put on a premium on quick passes and sharing the ball. Coach Monty Williams likes to call it a 0.5 second offense because he wanted a pass, shot or drive within a half second.

The offense was clicking early in the finals and the Suns took a 2-0 series lead. It was the Bucks who were struggling to find enough help for two-time MVP Giannis Antetokounmpo. But Milwaukee has flipped the script, winning the last three games — partly because Booker can’t do it all by himself.

Phoenix is out of mulligans. If the Suns don’t want to watch the Bucks celebrate in Milwaukee, they need to figure it out by the time the NBA Finals return to Wisconsin.