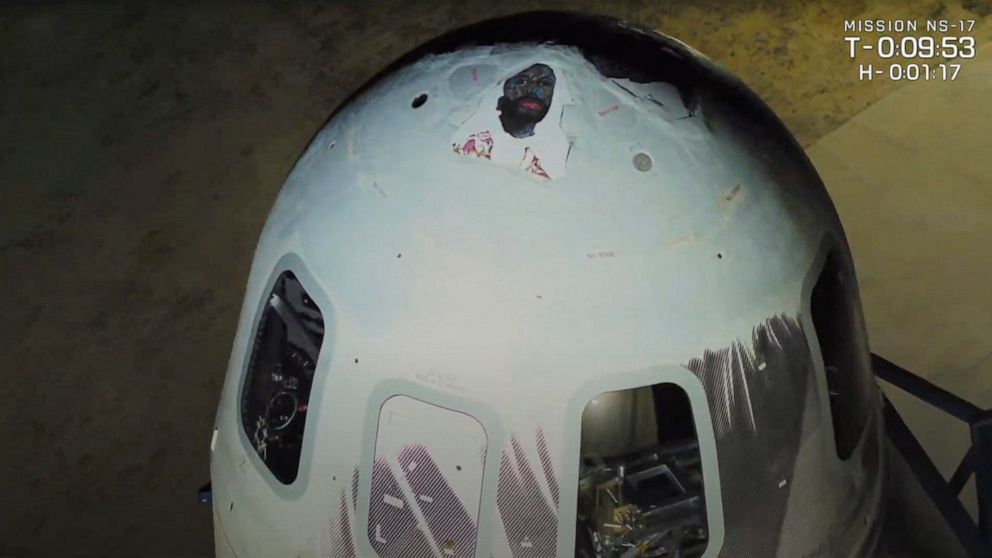 No one was aboard for Thursday’s 10-minute flight, which included other experiments from NASA and others.

The paintings by Ghana artist Amoako Boafo were on three parachute panels on the outside of the capsule at the very top. Boafo painted a self-portrait as well as portraits of his mother and a friend’s mother, explaining “a mother’s love comes from a place that is out of this world,” said Blue Origin launch commentator Kiah Erlich, a company official.

Schoolchildren from Ghana tuned into the launch webcast, according to Blue Origin. The Utah-based Uplift Aerospace Inc. commissioned Boafo’s work, “Suborbital Triptych”, as part of its new art-in-space program.

The New Shepard rocket blasted off from West Texas on Blue Origin’s 17th trip to space. The booster landed upright several minutes after liftoff. The fully automated capsule continued to an altitude of 66 miles (105 kilometers) before parachuting down nearby.

The paintings were on triangular-shaped panels a few feet in size and detached from the capsule when the parachutes were deployed. A company spokeswoman said they would be recovered from the desert floor.

On July 20, Blue Origin used another rocket and capsule to launch Amazon founder Bezos, his brother and two others who, at ages 82 and 18, set records for the oldest and youngest in space.

Blue Origin offered no specific date Thursday for the next passenger flight, but reported nearly $100 million in ticket sales to date. The company — which is not divulging ticket prices — plans to alternate between tourist and research flights, sometimes with the scientists aboard.

It was the second New Shepard flight for the lunar-landing experiment, which was mounted near the top of the booster and tested lasers and other sensors meant to ensure a pinpoint moon landing for astronauts. Also flying was equipment for turning astronauts’ space trash into gas for recycling into fuel or dumping overboard.