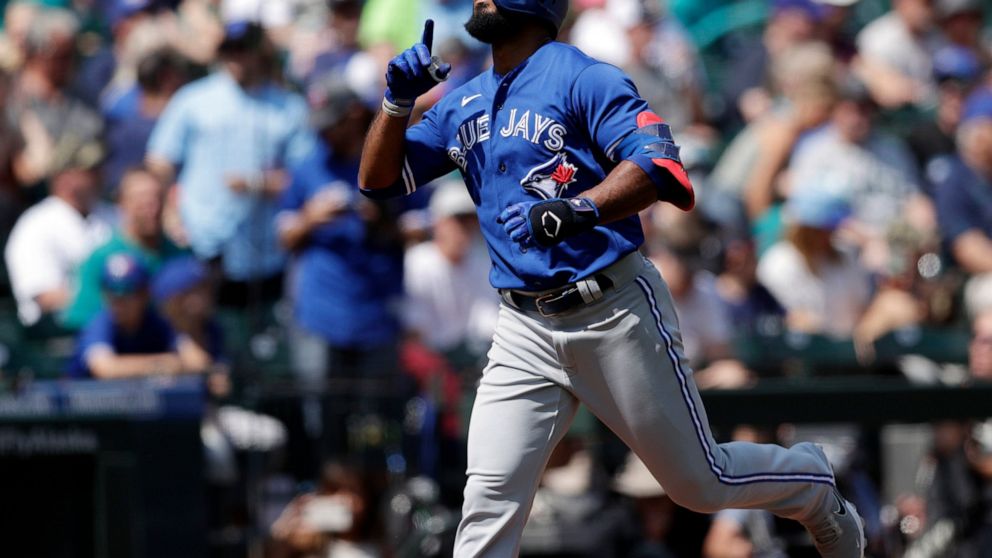 SEATTLE — After three straight losses on the West Coast and watching George Springer go down with another injury, Toronto manager Charlie Montoyo felt the need to get out of Seattle with at least one victory.

Once again the Blue Jays leaned on the long ball, and hot-hitting Teoscar Hernández was the instigator.

“That’s why I’m so happy with how the team came today and didn’t die. They came to fight and win a game and they did,” Montoyo said. “Pitching was good. Offense was good. It was great.”

Hernández and Randal Grichuk both connected in the second inning, and the Blue Jays used four homers to avoid a sweep with an 8-3 win over the Seattle Mariners on Sunday.

Hernández and Grichuk each hit their 20th homers of the season as part of Toronto’s three-run second inning against Seattle rookie Logan Gilbert, and the Blue Jays escaped Seattle without losing more ground in the American League wild-card race.

Alejandro Kirk added a two-out, two-run double in the third inning and the offensive surge, along with a solid start from Steven Matz, snapped a three-game losing streak for the Blue Jays.

“What is in the past, it’s in the past,” Hernández said. “We’re going to get concentrated on the last two games that we have in Washington, and try to win both, and try to go home in a good spot.”

Seattle missed a chance to jump ahead of Toronto in the wild-card race. After moments of offensive bursts in the first two games of the series, Seattle was mostly punchless against Matz. The Mariners’ lone run off the left-hander came in the first inning and without the ball leaving the infield as an infield single, two wild pitches and a passed ball allowed J.P. Crawford to score.

Seattle’s only other runs came on Kyle Seager’s 26th homer in the eighth inning.

“Couple chances there, needed a big hit to kind of get us back in it and just weren’t able to get it done,” Seattle manager Scott Servais said. “But overall we continue to play good baseball. It’s tough to sweep really good teams, and they got a heck of an offensive club.”

Hernández homered for the second straight game and the Blue Jays took advantage of times Gilbert (5-4) fell behind in the count and missed location with his fastball. Both Hernández and Grichuk homered on fastballs from Gilbert that failed to get far enough inside and stayed over the plate.

Hernández added a single in the third inning and added a bloop double in the fifth. Hernández missed his chance at the cycle striking out in the seventh.

Hernández is hitting .571 with three homers and 12 RBIs over the past eight games.

“There’s nothing different. When I get a good pitch to hit, I’m just putting the ball in play with hard contact and it’s getting through with base hits,” Hernández said.

Corey Dickerson and Marcus Semien both added solo homers late off Seattle reliever Yohan Ramirez. Semien’s was his 27th of the season.

Matz (10-7) lasted just five innings due to a high pitch count, but he held Seattle to three hits and the one run. He struck out four and has allowed three earned runs or fewer in six of his past seven starts.

Seattle started the day with the best ERA in the AL in August at 2.41. It was on the strength of its starting rotation that had gone 14 straight games dating to July 31 without allowing more than three earned runs.

Gilbert lasted four innings — his shortest start since July 24 vs. Oakland — and his five earned runs allowed were a season-high.

“I was going to come right after them,” Gilbert said. “Obviously they were hunting the fastball and trying to just looking for something out over the plate, especially if I didn’t get the slider in zone.”

Toronto’s Bo Bichette struck out a career-high five times. He’s the eighth player in the majors this season to strike out five times in a game.

Blue Jays: CF George Springer was out of the lineup after leaving Saturday night’s game in the seventh inning with a sprained left ankle. Montoyo said Springer was feeling much better on Sunday and there is a chance he could return to the lineup in Washington.

“We’re off tomorrow so he’ll get more treatment tomorrow and we’ll see how he is by Tuesday or Wednesday. But good improvement from last night,” Montoyo said.

Blue Jays: Following a day off, the Blue Jays close out their road trip in Washington. RHP Alek Manoah (5-1, 2.59) will make his 12th career start and first against the Nationals.

Mariners: Following a day off, the Mariners open a road trip in Texas on Tuesday. LHP Tyler Anderson (5-8, 4.24) will make his fourth start since being acquired by Seattle. Two of the previous three came against the Rangers.