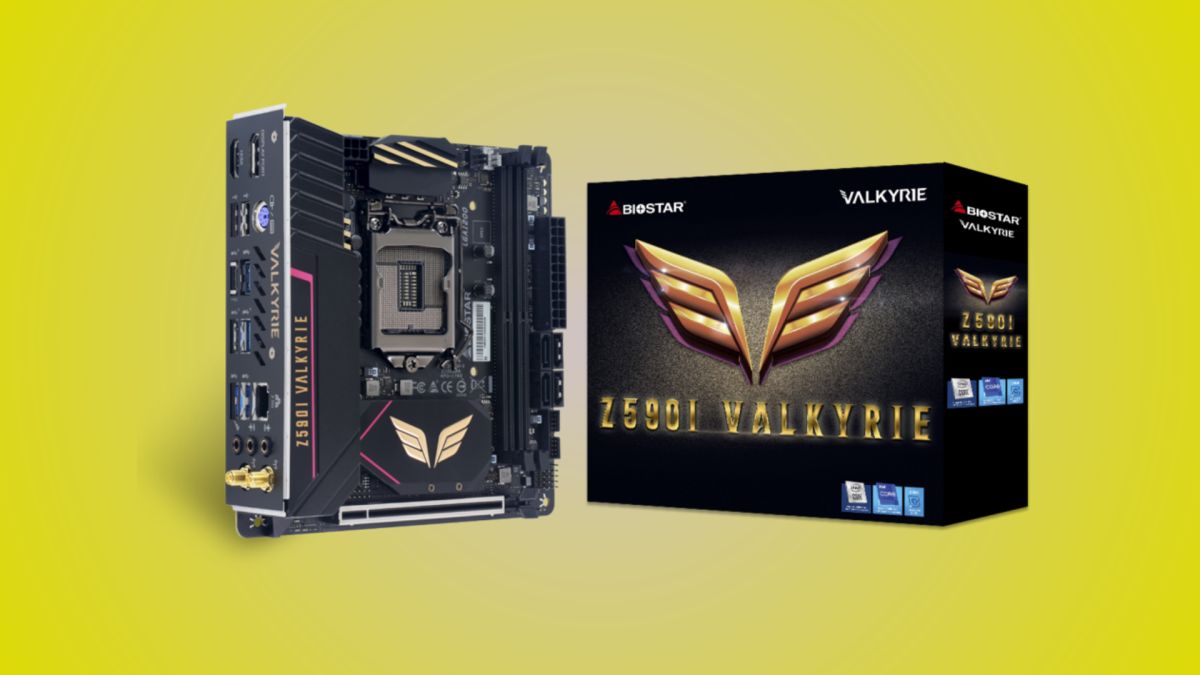 While Biostar may not be the most popular gaming motherboard brand, it’s certainly one that demands your attention, and the Z590I Valkyrie motherboard is an excellent example of this. Geared towards compact PC builds, the Z590I Valkyrie offers everything you need for a good motherboard, including support for the latest Intel processors as well as comfortable amount of storage options.

The single PCIe slot will of course most likely be taken up by your GPU, but when it comes to expansion there’s a healthy amount of ports at the back as well as two M.2 ports for SSDs and SATA ports for regular hard drives. The 64GB of RAM is almost overkill, but still a welcome addition for this board. Though we would have liked to see supported RAM speeds around 5000Hz for more enthusiast builds, everyday users will most likely be satisfied.

There’s very little to complain about with the Z590I Valkyrie, as performance was overall very good for this tiny board. Both games and regular applications ran flawlessly, and depending on what components you plug in, you can have a truly powerful yet compact PC on your hands.

The Biostar Z590I Valkyrie motherboard is available now, though official pricing is a bit of a mystery. We’ve seen this board on Amazon priced at anywhere between $180 to $230, given that the full-sized Z590 Valkyrie board comes in at around $250. We’ll update this review with official pricing once it’s been confirmed to us.

If you do happen to see this board for sale anywhere, we highly recommend picking it up as a budget-friendly yet effective board to power your next compact build.

The Z590I Valkyrie has a very understated look compared to other gaming motherboards. Large portions of the board and the IO panel are covered by heatsinks, which sport a mostly black color with accents of gold and red.

Towards the top you’ll find the 10-phase power implementation, which should easily support the latest Intel CPUs. A lot of times on boards that support 11th Gen CPUs we see underequipped power phases, which results in poor performance and limits CPU overclocking. Thankfully this isn’t the case here, so Biostar gets it right with this setup. Right next to that are the two DDR4 memory slots, which support up to 64GB of RAM.

At the bottom of the board you’ll find a single cooling block that covers the chipset as well as a M.2 SSD slot. This slot is PCIe 4.0 compliant, which makes it great for a super-fast OS bootup drive. Cleverly, Biostar has also equipped a second PCIe 3.0 slot at the back of the motherboard, which you can use for secondary drive storage. There’s also four SATA connectors available as well, should you choose to opt to use those instead.

The rear I/O panel contains all the connectivity you need – there’s seven USB ports which are a mix of USB 2.0, USB 3.0 Gen 1, and USB 3.0 Gen 2. There’s also a USB 3.2 Type-C port for compatible devices such as external hard drives. You also get a DisplayPort and HDMI output if necessary, as well as a 2.5GbE port for network connectivity. There’s no WiFi/Bluetooth included on this board which is a bit of a disappointment. While there is space on the motherboard to slot one in (along with the necessary hardware included in the box), we really wish that this board came with a wireless module already, given its price point.

The board itself has clearly marked headers for where everything needs to plug in, including a single 5V LED header and a 12V one as well. There are three fan connectors that can be used for CPU fan, water cooling, or for cooling the case. There’s also a Thunderbolt 3 header on the board, if your case has the necessary cabling. We also like that there are troubleshooting LEDs on the board as well, to indicate if there are problems with the GPU, RAM, or CPU.

Here’s how the Biostar Z590I Valkyrie did in our suite of benchmarks:

Performance on the Z590I Valkyrie was very good, with the motherboard holding up well during our synthetic benchmarks. For gaming tests, scores were also consistent, with Shadow of Tomb Raider hitting a comfortable 149fps during our 1080p tests with all effects turned on. We saw similar results in games like Overwatch and Assassin’s Creed: Odyssey, with frame rates never dipping below 130fps. For 1440p gaming and above, this would rely mostly on your GPU’s capabilities, so depending on what card you’re slotting into this motherboard, you’ll get some pretty great results.

The Z590I Valkyrie’s BIOS is fairly straightforward to navigate through, and you can dive down deeper to gradually overclock your CPU settings if you need to. Even if you just want to run this board with stock CPU and memory settings, you’ll be more than happy with the performance you’re getting. There are of course practical limits when it comes to CPU temperatures, but it is entirely possible to approach the 5GHz CPU clock speeds while keeping temperatures close to 78-81C.

One thing that we didn’t like on the Z590I Valkyrie was the small fan that sits under the I/O shield. At bootup it’s far too loud despite its small size, so we highly recommend adjusting its speed manually in the BIOS so that it’s less annoying to hear.

For those looking to upgrade to Windows 11, the Z590I Valkyrie is compatible with Microsoft’s upcoming OS, as tested through the company’s compatibility app.

Should I buy the Biostar Z590I Valkyrie Motherboard?

You’re building a compact PCThe Z590I Valkyrie packs a ton of performance and connectivity in a tiny frame, making it an easy choice for small form factor builds.

You want the latest and greatestAlong with the latest 11th Gen Intel processors, the Z590I Valkyrie is more than capable of handling powerful GPUs as well as fast RAM, which is great news if you’re building a powerful gaming PC.

You’re tinkering with overclockingThe Z590I Valkyrie is able to support CPU overclocking with more than capable power delivery and a very straightforward BIOS.

You want to expandGiven its tiny size, this isn’t the motherboard to buy if you’re looking to add in additional components at a later date – the full-sized Z590 Valkyrie is what you’d want instead.

You need WiFi out of the boxThe Z590I Valkyrie doesn’t feature WiFi or Bluetooth out of the box, so you’ll have to spend a bit extra to have this added in.