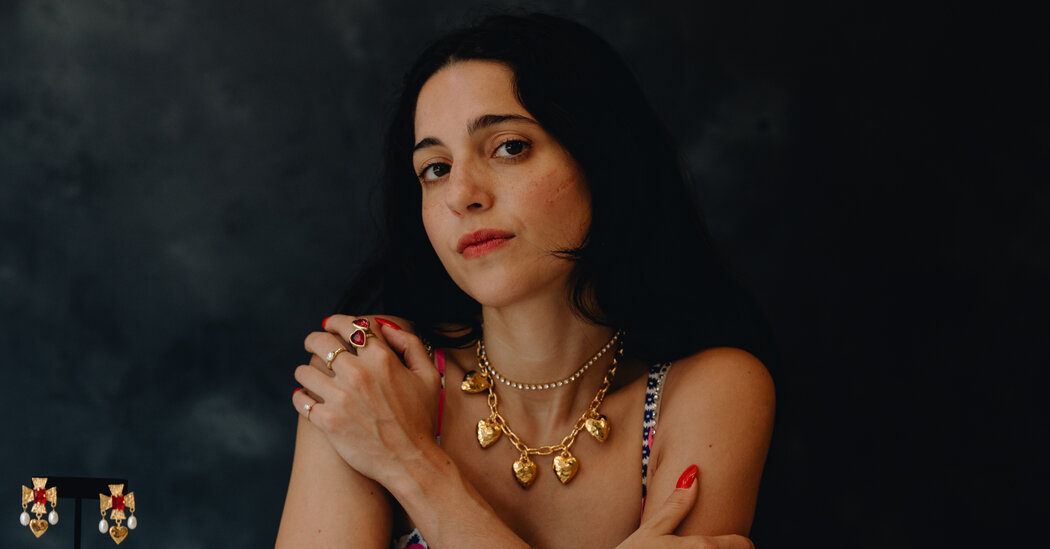 “I just like the sound of it,” Natasha Ghosn said about naming her jewelry and fragrance brand Mondo Mondo. “I was thinking of Mondo films, Italian, kitschiness and campiness.”

Ms. Ghosn, 34, began her line in 2008, when she was living in New York making digitally printed T-shirts that she painted by hand. Now the brand has come to exemplify the bold, 1980s-influenced jewelry of the moment. After years when subtle jewelry — delicate bands, thin chains, little studs — dominated trends, Mondo Mondo stands apart. It’s jewelry for extroverts, or at least those who want to look like one.

The extravagant, gilded shapes wink at the 1980s designs by Christian Lacroix, Moschino, Verducci and Chanel. But rather than being collected by socialites to be worn at luncheons, the necklaces and earrings and rings and cuffs are embraced by people who were born long after the Reagan administration.

One such fan is the model Bella Hadid, 24, who has posted several photos of herself on Instagram wearing Mondo Mondo’s 18-karat gold-plated Tropicana necklace ($225). Its heart shape is intentionally imprecise and studded with chunky glass and crystal stones that make it look at once crafty, primordial and glamorous.

“I like when something kind of goes through a filter, and that is the aesthetic of Mondo,” Ms. Ghosn said. “When I wear jewelry, I want to draw something out of my personality that might be struggling to come out.”

Ms. Ghosn studied at the Art Institute of Chicago and then at a small jewelry school in San Miguel de Allende, Mexico. “It was very rugged, at your own risk, but you learn really fast,” she said. “You will cry in class.” All of her designs, which are manufactured in Los Angeles, are sculpted out of wax.

“What I love about sculpted jewelry is it’s so free and so big and ridiculous,” she said. “And it’s just really liberating to work on that scale with the body because jewelry tends to be, like, tiny, tiny, tiny.”

Her grandfather was an artist in Mexico City, and her mother owned women’s boutiques in Houston. “She had these really amazing small designers in the ’90s that many people don’t even know about anymore, like a line called J Morgan Puett,” Ms. Ghosn said over tea at Café Grumpy on the Lower East Side on a recent Saturday. In the early aughts, her mother’s store carried Miss Sixty, Fornarina, Fiorucci — all clothing lines with the low rises and shrunken silhouettes that have recently made a comeback.

One of Ms. Ghosn’s favorite Mondo Mondo designs is a pair of two-inch-long oval-shaped blue and crystal earrings called Tinseltown ($150). They have post backs but were originally sold as clip-ons. “I love it when you take an earring off before you answer the phone, and when you drag the whole phone across the room and throw the cord over a chair,” she said, free-associating on jewelry’s inherent chic.

“Jewelry is visual storytelling in a way,” she said. So too, she would say, is perfume.

For the holiday season, Mondo Mondo will introduce three new scents: Rosa Milagrosa (“a really soapy rose”), Lounge Lizard (“a fresh orange blossomy cologne”) and Tobacciana (“an amber-y tobacco”). “So, in my head, Lounge Lizard is a very Gen X, swinger kind of vibe,” she said. “And then Tobacciana, it’s an antique mall vibe, even though it will actually present as very fab. Rosa Milagrosa is a Jane’s Addiction botanica kind of vibe.”

Even though Ms. Ghosn is part of the millennial generation, her references often skew to the previous generation. Perry Farrell, the Jane’s Addiction singer, is a major influence, as are “Route 66, comedy, romanticism, drama, jazz, fantasy, ancient mythology,” she said. “I identify with Gen X, but I think like a millennial.”

“I think the brand has really grown with me,” she said. “I’d say it’s probably people in their mid-20s to mid-30s mostly, but we have such a range. More men are getting interested in it now, which is really exciting.”

Hearts are selling well, and the coming collections will have star motifs. “A little more sassiness, less emotional or performative … showbiz,” she said.

Ms. Ghosn maintains a shop in front of her studio in the Highland Park neighborhood of Los Angeles, which is far removed from showbiz associations. She and her business partner, David Pacho, were in New York to investigate locations for a pop-up boutique. “Because it’s jewelry and perfume, it could be a tiny little space,” she said.

Beyond that, Ms. Ghosn is leaving the future of the brand loose. “I don’t know where Mondo will go,” she said. “It could be just a momentary thing. It could be a legacy brand one day that has every category of product. I kind of just let it tell me.”

“If I could be like Tiffany’s or Hermès, that would be really cool,” she said with a laugh. “But we’ll see.”