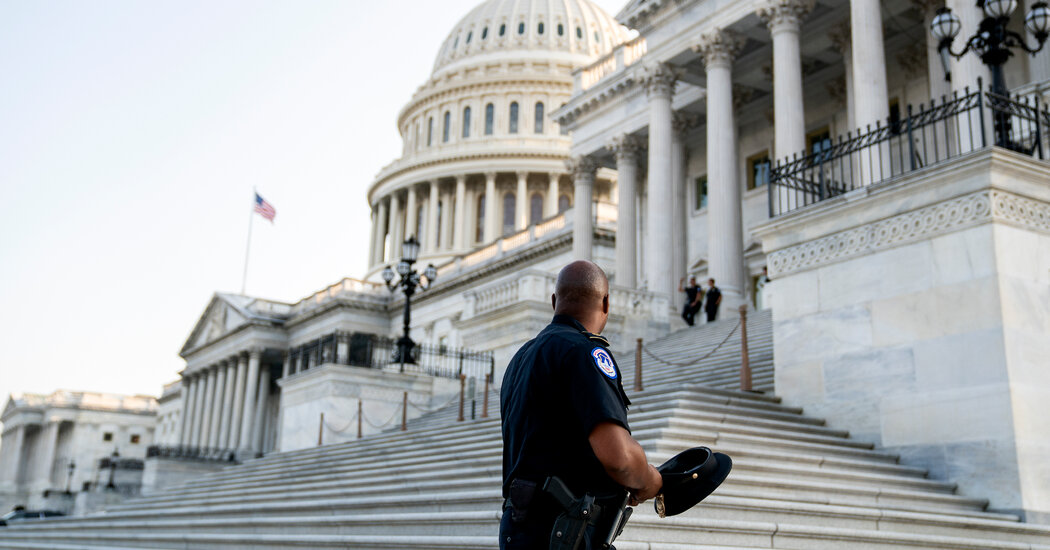 President Biden on Thursday signed a bill awarding the Congressional Gold Medal, the body’s highest expression of national appreciation, to a group of law enforcement officers who responded to the Jan. 6 attack on the Capitol.

Mr. Biden, who was joined by Vice President Kamala Harris, signed the legislation during a Rose Garden ceremony that was attended by more than a dozen officers. “It breaks my heart,” he said. “It breaks the heart of the nation to remember that you were assaulted by thousands of violent insurrectionists at the Capitol of the United States of America.”

Congress passed the bill this week amid reports of the suicides of two officers who had been at the Capitol on the day of the riot, bringing to four the known number of officers who have killed themselves in its aftermath. Dozens of other officers are still recovering from the psychological and physical trauma they suffered at the hands of the mob.

“On Jan. 6, Congress got a firsthand reminder of a reality that many American citizens face every day,” Senator Mitch McConnell, Republican of Kentucky and the minority leader, said in a statement on Thursday. “That the brave men and women of law enforcement really are a thin blue line standing between peace and chaos.”

Last week, four police officers who defended the Capitol that day testified about their experiences in excruciating detail before a special committee investigating the riot, describing the brutal violence, racism and hostility they suffered as a throng of angry rioters, acting in the name of President Donald J. Trump, beat, crushed and shocked them.

Under the legislation, four Congressional Gold Medals will be issued to honor the officers: one each to be displayed at the headquarters of the Capitol Police and the Metropolitan Police Department, one at the Smithsonian and one at the Capitol. A plaque at the Capitol will list all the law enforcement agencies that helped protect the building.

Around 140 police officers were injured during the attack, and 15 were hospitalized. Officer Brian D. Sicknick of the Capitol Police died of a stroke after clashing with the mob.

The Senate voted in February to award a Congressional Gold Medal to Officer Eugene Goodman, who led rioters away from the Senate chamber and directed Senator Mitt Romney, Republican of Utah, away from the mob.

In June, the House expanded the measure to apply to all members of the Capitol Police and the Metropolitan Police Department who were involved in the Jan. 6 response. That legislation passed overwhelmingly, though 21 far-right Republicans voted against it.

GOP Senate candidates back Trump on almost everything. But only Greitens has joined…