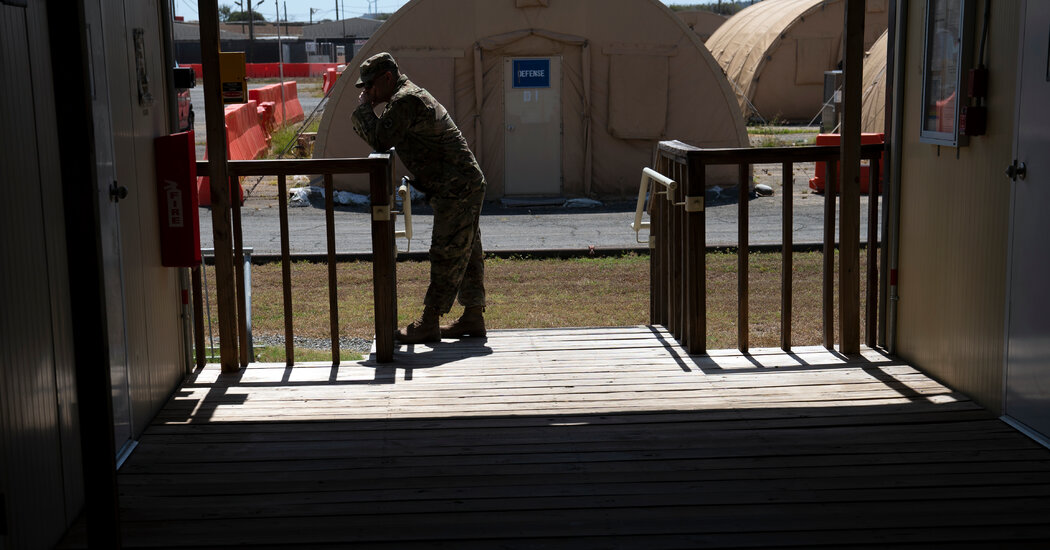 WASHINGTON — The Biden administration legal team is divided over whether the government should say that detainees at the American naval base at Guantánamo Bay, Cuba, have due process rights under the Constitution, according to people familiar with internal deliberations.

The Justice Department is set to file a brief by Friday night that is supposed to take a position on that question for a case involving a 53-year-old Yemeni man, Abdulsalam al-Hela, who has been held without charge or trial at the wartime prison since 2004. During the Trump administration, the department had argued to an appeals court panel that he had no due process rights.

The case is now before the full Court of Appeals for the District of Columbia Circuit. Legal scholars and lawyers for other detainees — including those charged at a military commission — have closely watched the case because it has squarely raised a legal and human rights issue that years of litigation over Guantánamo have yet to answer.

Lawyers in national security roles across the executive branch are said to have been arguing for weeks over what the brief should say. Some Justice Department officials — including career government lawyers who have spent years under administrations of both parties defending Guantánamo detention policies in court — are wary of taking a position that could make it harder to win such cases.

But other officials contend that it would clash with the Biden administration’s values not to clearly say that detainees have due process rights. The question first arose when the George W. Bush administration began taking wartime prisoners to the naval base in 2002 and claimed that courts had no jurisdiction and that the Geneva Conventions did not apply there, leading critics to call it a legal black hole.

The Constitution’s due process clause says no one can be “deprived of life, liberty or property, without due process of law.” What process is “due” is not always clear. But if the clause protects the detainees, then they would have a greater basis to ask courts to intervene over how the government treats them across a range of matters — including their continued detention, medical treatment and what evidence could be used in commission trials.

The officials familiar with internal deliberations spoke on the condition of anonymity, but the disagreement partly spilled out of the executive branch this week. A top Senate Democrat — Senator Richard J. Durbin of Illinois, the chairman of the Judiciary Committee and his party’s No. 2 leader in the chamber — sent a letter to Attorney General Merrick B. Garland urging him to direct the department to say that detainees have such rights.

“It is well past time for the department to reconsider its approach to the applicability of the basic safeguards of due process to the men who remain imprisoned without charge or trial at Guantánamo, as well as other positions that help perpetuate this moral stain upon our nation,” Mr. Durbin wrote.

For now, however, Elizabeth B. Prelogar, the acting solicitor general who will sign the brief, is primarily handling the issue. Mr. Garland is said to have recused himself from playing any role in the litigation; he was until recently a judge on the Court of Appeals for the District of Columbia Circuit and participated in cases involving Guantánamo detainees.

In a three-judge panel ruling in August, two conservative judges on the appeals court used Mr. Hela’s case to declare that the Constitution’s due process clause does not apply to non-Americans held there, as the Trump administration had argued. (A third judge on the panel, also a Republican appointee, opposed making the sweeping claim about due process rights, saying it was unnecessary to conclude that holding Mr. Hela was lawful.)

Then in April, the full Court of Appeals for the District of Columbia Circuit — which is controlled by more liberal-leaning judges — vacated that panel ruling and decided to rehear his case. It gave the Biden Justice Department until Friday to file a brief on its position.

The Biden legal team is wrestling with essentially three options in the Hela case. It could stick to the Trump-era position that Guantánamo detainees like Mr. Hela have no due process rights.

Second, it could withdraw that position but take no clear position on the question. Or it could affirmatively say that the due process clause covers detainees — and urge the full appeals court to say so in its ruling.

The outcome of the debate appears unlikely to help Mr. Hela. Biden administration officials broadly agree that it is lawful for the government to keep holding him either way. Moreover, the government already has decided that it does not want to hold Mr. Hela perpetually: Last month, a six-agency parole-like board recommended his transfer if a country can be found to resettle him, with his wife, in a secure arrangement.

The dilemma about what to say in the brief is one of several national security legal policy problems involving Guantánamo litigation confronting the Biden legal team — which is still only partly staffed by Senate-confirmed political appointees.

Last week, for example, Ms. Prelogar decided to file a Supreme Court brief that pressed forward with a Trump-era position in another case centering on a prominent Guantánamo detainee best known as Abu Zubaydah. It argued that the court should overturn a Ninth Circuit Court of Appeals ruling related to disclosures about his torture at a C.I.A. black site prison because courts should defer to the view of President Donald J. Trump’s former C.I.A. director, Mike Pompeo, that the matter risked divulging state secrets.

The decision on the due process clause could also have a ripple effect on other matters.

This week, government lawyers obtained a two-week delay from a review court to present a position on a defense challenge to a decision by a judge in the military commissions case involving the 2000 bombing of the naval destroyer Cole. That decision permitted prosecutors, in a pretrial filing, to use something the defendant said while being tortured by the C.I.A., which his lawyers say violates due process.

And more broadly, defense lawyers in that and other commissions cases, including the capital case against five men accused of conspiring in the Sept. 11, 2001, attacks, have peppered pretrial litigation with objections based on due process claims — even as prosecutors at Guantánamo have maintained that the clause does not apply to the tribunals process.

“Because the accused are alien enemy belligerents without property or presence in the United States, the due process clause does not extend to them,” prosecutors in the Sept. 11 case wrote in February 2020.

Klain one year in: tussles with key allies, rethinking the inside game

With Some Voters ‘Ready to Move On,’ Democrats Search for New Message on Virus