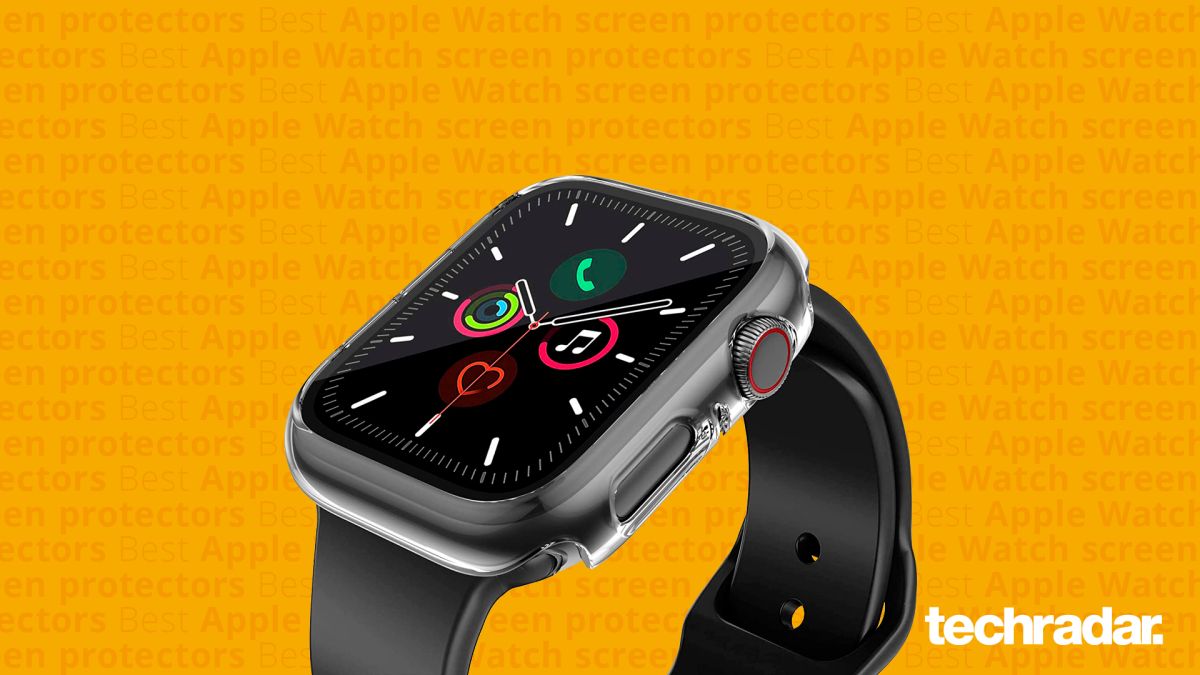 It’s definitely worth buying one of the best Apple Watch screen protectors to keep your beloved smartwatch from getting damaged, however with the market that’s saturated in many similar products, it can be hard to know which you should buy.

The best Apple Watch screen protector for you has lots of considerations too, beginning with ‘do I need one in the first place?’. If you have a stainless steel Apple Watch, you likely don’t, as its sapphire crystal glass is tough and scratch-resistant.

That’s not necessarily the case for aluminum Apple Watch models though, as testing units we’ve used have sometimes accumulated lots of little scratches and dings. This can be annoying for some people, and also affects the resale value.

Before you dive in, bear in mind if you’re thinking ahead to the Apple Watch 7 when it launches soon, it needs a different screen protector than other Apple Watches. That’s because it offers more screen space with a choice of 41mm or 45mm so existing screen protectors won’t do the job as well.

Since they count as ‘everyday wear and tear’, scratches aren’t covered by most warranties, though smashes are. If you really damage your screen and you’ve got AppleCare, Apple will replace the screen up to two times for a fee of $69 / £49 / AU$99 each time.

Even if you do have AppleCare, it’s better not to have to pay the fee. After all, protecting your watch from damage is cheaper than fixing it after damage has occurred. Even the most expensive Apple Watch screen protector here is a fraction of the price of an Apple Watch screen repair.

These are products that we haven’t had in our test labs, but based on our experts’ opinion and knowledge of the most reputable brands around, we think these are worth looking at.

Our selections, ranked from cheapest to most expensive, take into account online reviews, brand reputation, product capability or unique features to help you pick through the maze of choices available to you.

Most screen protectors just cover the screen. Not this one: it’s a full body protector with sections to cover the entire Apple Watch body, although we’re not entirely sure why you might want to do that. At the time of writing the full coverage model is available for the Apple Watch 3 but not the Apple Watch 4 or newer.

It’s a ‘liquid skin’ film that you apply while wet, although some reviewers have found that the little sections for the sides of the Apple Watch are very, very fiddly to apply. The main screen bit is a doddle, though.

+Great price+Access to both buttons

–Not the best fit–Not waterproof

This is one of the most affordable screen protectors going with the bonus of full casing protection for the Apple Watch 4 or 5.

It gives you easy access to both the digital crown and the side button while protecting the Watch from dings and everyday wear.

One thing to note is that there’s a slight gap between the screen cover and the screen as this isn’t an adhesive protector, so you’ll have to remove it when you go swimming otherwise water will get under the protector. This also means you’ll have to take off your Watch when showering.

A snug form of protection

–Not the best water seal

Well priced and attractive looking, the Piuellia Black Hard Case works equally well for the Apple Watch Series 6 and Apple Watch SE. It fits tightly around both the face and sides of the watch, while still offering easy access to relevant buttons and ensuring the touch screen feels as natural as before.

Ideal for protecting your timepiece from scratches, the Piuellia Black Hard Case doesn’t have the greatest of water seals so that’s something to be aware of if you swim regularly, but it’s very easy to take on and off for times like these.

Full coverage, but you’ll want to drop it when it’s hot

If you want to protect your Apple Watch with a case, this is one of the thinnest, least obtrusive ones around. It’s made of the same TPU as rugged watch cases, so it’s tough and scratch-resistant, and it’s easy to fit.

The main downside to this kind of case is that it can trap moisture between the case and the screen, so for example it’s not one to wear to the gym or when you go for a swim. Make sure you get what you order, though: some customers say they paid for a two-pack but only got one.

When the going gets tough, the tough get Spigen

Spigen makes a whole bunch of Apple Watch cases with differing levels of protection: this, the Rugged Armor version, is one of the cheaper options. It’s a solid TPU case that protects your watch from impacts, though it’s bulky in a Casio G-Shock kind of way.

This case doesn’t include any direct screen protection – the raised lip around the screen should be enough – and that means it won’t suffer from the misting or water ingress that can affect some full-coverage cases.

Very cheap and pretty cheerful too

–Plastic film won’t last forever–Cheaper rivals, especially in the US

The protectors are made of laser-cut liquid skin film that can be washed and reapplied; unlike some film protectors the LK ones are designed to be applied while wet, which makes it easier to get rid of the dreaded bubbles.

There’s also a lifetime warranty, although we’re not sure why you’d bother invoking it when a six-pack of these protectors is so cheap: it’s much quicker to just chuck on another protector than to write an angry email to the manufacturer.

When you want a protector made of something tougher

+Tougher than film+Less prone to bubbles

There are lots of brands offering very similar tempered glass screen protectors with very similar photography, which makes us think they’re coming from the same factories.

That means the buying decision here is largely down to price and reviews: look for ones featuring customer images rather than just endless “Best protector EVER!” hyperbole.

Tempered glass is tougher than film and less prone to air bubbles but there are three minor downsides: it’s slightly fiddlier to apply, it costs more, and film doesn’t smash if something hard hits it. That means even fairly minor knocks can mean it’s new-protector time.

Durable for the price

Reasonably priced, the HAPAW Screen Protector looks good for the price and is suitably durable too, able to protect your watch from scratches, collisions and general all-round damage.

The tempered glass gives you some added protection but it shouldn’t affect the touch sensitivity of the device with the buttons also easily reached thanks to precise hole cutouts. The only real downside here is the need to remove it before swimming as it isn’t swim proof.

What to know about Apple Watch screen protectors

If you want to keep your watch pristine and protected, there are three main options. There are plastic screen protectors, very similar to smartphone ones, where you peel off the backing, stick them to the screen and push out the bubbles.

These are by far the cheapest screen protectors you can buy. They can be a little bit fiddly to fit but they do a decent job of standing up to everyday scrapes and bumps.

If you’d rather add something a bit tougher, a tempered glass protector is a better option. However, these are much harder to fit as they’re not as flexible or as forgiving as plastic.

Also consider that the cheaper aluminum Apple Watch is actually a lot less prone to obvious scratches than the fancier stainless steel version in terms of body (if not screen, as noted above).

While you might assume the steel is harder and tougher, it’s actually softer than the aluminum used in the entry-level model. Don’t forget about the finish either. Like the rear casing of iPods Classics, the steel Apple Watch has a super-shiny chrome finish that shows off scratches very readily. It almost seems like the little guy is proud of its war wounds.

Finally, if you’re thinking about protection, there are cases that surround the whole watch. Inevitably, they add bulk and some models are hideous. But if you’re likely to be in an environment where your watch faces various hazards, a case may be a worthwhile investment unless that environment is hot and humid, or wet.

Most protective cases aren’t waterproof or airtight, so they’ll often get steamy in the gym or will let in water when you swim. That doesn’t affect your watch but does make it hard to see the display.

Round up of today’s best deals